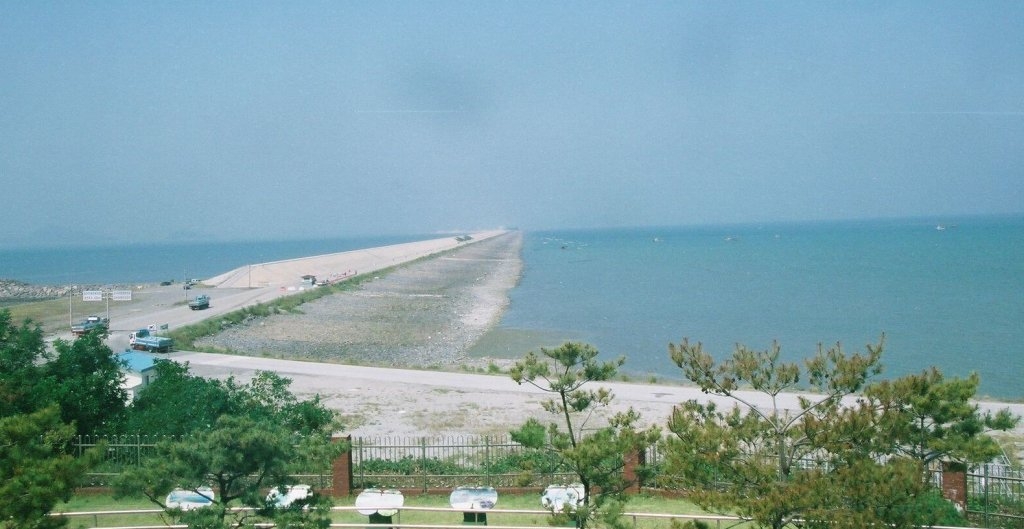 There is a way to stop Europe’s coastal cities from vanishing below the waves – enclose the North Sea. But there’s a simpler solution.

Two European scientists have proposed the ultimate flood barrier: they want to dam the North Sea and the English Channel with more than 600 kilometres (373 miles) of sea wall.

This would protect 15 nations in western Europe against the ravages of what could one day be 10 metres (33 feet) of sea level rise. It would ultimately turn the North Sea into a freshwater lake and, at up to €500 billion (£435 bn) or more, represent the single most costly piece of engineering ever.

But, the pair reason, to do nothing could cost the people of Europe perhaps 10 times as much as coasts eroded, the sea overwhelmed the Low Countries, reshaped the contours of a continent and forced 25 million people to move inland.

In their paper in the Bulletin of the American Meteorological Society,  Sjoerd Groeskamp of the Royal Netherlands Institute for Sea Research and Joakim Kjellsson of Geomar, the Helmholtz oceanographic research centre in Kiel, Germany, concede that what they propose “may seem an overwhelming and unrealistic solution at first.”

But compared with the cost of inaction, or the cost of managed retreat from the coastline that would displace millions, it could be the cheapest option. “It might be impossible to truly fathom the magnitude of the threat that global-mean sea level rise poses,” they warn.

Global average temperatures have risen by 1°C and sea levels by 21 cms (8 inches) since 1880. Sea level rise lags behind atmospheric warming, but the guess is that every degree Celsius in the air will be followed eventually by 2.3 metres (7.5 feet) of higher seas.

By 2100, temperatures could have risen more than 3°C and sea levels by up to 1.5 metres (5 feet). If nations carry on burning fossil fuels the icecaps will melt inexorably, and by 2500 seas could have risen by 10 metres.

“The best solution will always be the treatment of the cause: human-caused climate change,” they write. However, if nations do not act to control the greenhouse gas emissions and forest destruction that cause global heating, and ever higher tides, then solutions such as the North European Enclosure Dam, known for short as NEED, are the only option.

The two researchers propose a barrier, a dike of sloping sides 50 metres wide across the North Sea from Bergen in Norway to the north-east tip of Scotland, via the Shetland and Orkney Islands.

“This dam is mainly a call to do something about climate change now. If we do nothing, then this extreme dam might just be the only solution”

The 160 kms (100 miles) of sea defence from south-west England to the westernmost point of France would be a little less problematic: sea depths are hardly more than 100 metres (330 feet).

But the engineers would also have to factor in the 40,000 cubic metres of river water that would discharge into this enclosed basin every second. This would mean the same volume would need pumping continuously into the Atlantic on the far side of the dikes.

Since the barrier would enclose a number of the world’s great shipping ports, there would have to be sluice gates to let the big ships through, or alternatively new ports on the ocean side of the barriers.

The very nature of the enclosed North Sea would begin to change. Within a decade or two, it would start to turn into a freshwater lake: it would be the end of centuries of a fishing industry.

It could – the scientists admit their calculations are of the “back of an envelope” variety – be done. They scaled up the costs of the world’s largest dikes so far in the Netherlands and South Korea, to calculate the 51 billion tonnes of sand needed for the project. This is about what the world uses every year in construction.

They note that fixed seabed oil platforms have been constructed to a depth of 500 metres (1,640 feet), so engineers already know how to do such things. Pumps of the scale required to handle the incoming river discharges are already in use, but they would be needed in their hundreds.

And although the cost would reach somewhere between €250-550 bn (£220-480 bn), this − spread over the 20 years the project would take − would represent only at most 0.32% of the gross domestic product of the UK, Netherlands, Germany, Belgium and Denmark combined: the five nations with most to lose from the rising tides.

It would, the authors argue, cost just the Netherlands – which already has 3,600 km (2,240 miles) of flood protection − a third of that sum to defend against sea level rises of only 1.5 metres. The good news is that, if such a project worked for western Europe, then the same techniques could enclose the Irish Sea, the Mediterranean, the Red Sea and the Persian Gulf.

“This dam makes it almost tangible what the consequences of continued sea level rise will be; a rise of 10 metres by the year 2500 according to the bleakest scenarios,” said Dr Groeskamp.

“This dam is therefore mainly a call to do something about climate change now. If we do nothing, then this extreme dam might just be the only solution.” − Climate News Network