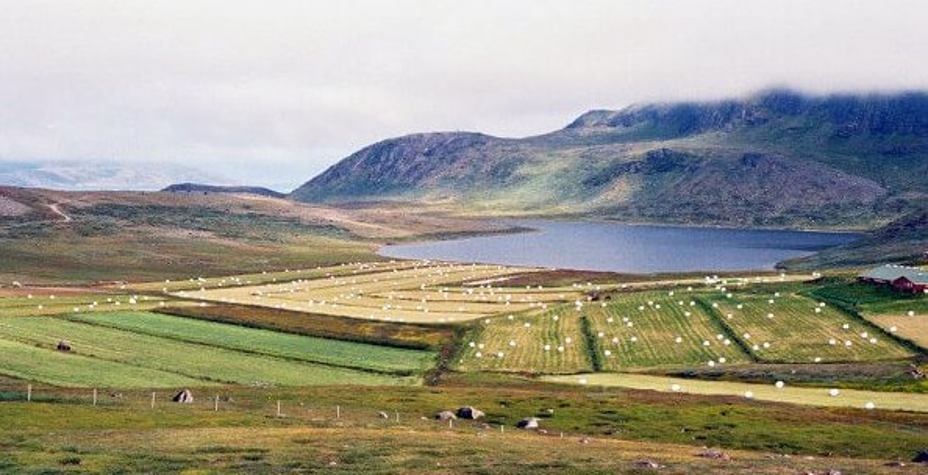 Harvesting the hay in Vatnahverfi, Greenland: The Arctic is greening. Image: By jtstewart, via Wikimedia Commons

Lustier plant growth as greenhouse gases climb should counter global heating and atmospheric carbon build-up. But it’s not quite so simple.

The Arctic is getting greener as greenhouse gases abound and the global thermometer rises. The vegetation of the high latitudes is moving further north, growing taller, becoming more substantial, more abundant and budding earlier, according to new studies by 40 scientists from 36 European and US institutions.

And the whole planet is getting greener too, according to a separate study in a second journal, as more carbon dioxide in the atmosphere – the chief cause of global heating – also acts as a fertiliser to stimulate plant growth.

It is as if researchers have finally identified a genuine negative feedback effect: as the world warms because of higher levels of greenhouse gases, the plant world responds by absorbing more of the carbon in the atmosphere and modifying the overall impact.

But both studies identify problems with what might be a comforting conclusion: it isn’t clear why in some Arctic regions the green things are getting greener, while in others the vegetation cover is becoming poorer.

And worldwide, it might be that much of the global greening can be attributed to human action – the advance of industrial-scale agriculture and commercial forest plantation – in which case most of the absorbed carbon dioxide will be returned to the atmosphere sooner or later.

“It is ironic that the very same carbon emissions responsible for harmful changes to climate are also fertilising plant growth, which in turn is somewhat moderating global warming”

Both studies confirm the value of a closer look at the evidence so far – and the need for further study.

In the journal Nature Climate Change, scientists report that they checked the big picture of polar greening based on four decades of data from large-scale satellite observation against more detailed evidence over smaller sample regions collected by sensors mounted on drones and on aircraft, as well as direct examination on the once-frozen ground.

The Arctic is the fastest-warming region of the planet: it is warming twice as fast as the globe as a whole. Snow melts earlier, plants leaf sooner. Shrubs that once stayed close to the slushy snow surface are now taller, and new species are colonising once hostile terrain.

This is expected to destabilise the Arctic tundra, the region of year-round permafrost that masks a vast reservoir of carbon buried in the frozen soils.

So botanists and climate scientists in the high latitudes now have to begin some tricky calculations in their pursuit of reliable estimates of the global carbon budget. How much carbon will the new green growth absorb and store? And how much carbon buried for the last 100,000 years or so will escape into the atmosphere with the advance of the northern greenery and the thawing of the soils?

But at least, according to a paper in the journal Nature Reviews Earth and Environment, the observed greening of the Arctic is a natural response to rising average temperatures and greater carbon dioxide fertilisation as a consequence of ever-higher levels of greenhouse gas emissions and consequent climate change.

Svalbard in the high Arctic is almost 2°C warmer in summer than it was in 1986, and at least 30% greener. But the Arctic is a region with limited human settlement and low industrial investment.

A team of researchers from China, the US, France and Norway combed through 250 earlier studies, and revisited satellite data, climate models and field observations, to make sense of the evidence of a planet that has grown a lot greener: half of all the world’s vegetated lands are leafier than they once were.

And they concluded that it was possible that the growth of global greening in the last 40 years may have slowed the rate of global heating by as much as 0.25°C.

But the same greening can be seen as evidence of rapid human impact on the planet as a whole: much of it can be explained by more intensive use of farmland and forest plantation, especially in the world’s most populous countries, India and China.

“It is ironic that the very same carbon emissions responsible for harmful changes to climate are also fertilising plant growth, which in turn is somewhat moderating global warming,” said one author, Jarle Bjerke of the Norwegian Institute for Nature Research.

And his co-author Phillipe Ciais, of France’s Laboratory of Climate and Environmental Sciences, said: “Plants are actively defending against the dangers of carbon pollution by not only sequestering carbon on land but also by wetting the atmosphere through transpiration of ground water and evaporation of precipitation intercepted by their bodies.

“Stopping deforestation and promoting sustainable, ecologically sensible afforestation could be one of the simplest and most cost-effective, though not sufficient, defences against climate change.” – Climate News Network