The fracking moratorium: is it the rocks or the people who are sensitive?

When, on 2 November, the government announced a moratorium on fracking in England until proved safe, opponents felt their protests had been justified, while supporters either thought it was an election stunt or wondered why other countries did not have the same problem. Was it the ground underneath England or the people above it that were especially sensitive to fracking ?

Cuadrilla drilled the first shale gas well in the UK in 2011 in order to evaluate the Bowland Shale on the Flyde peninsular, Lancashire.  After two frack jobs, the British Geological Society’s regional monitors detected seismic events of magnitude 1.5 and 2.3M. Since these were higher than normal for frack jobs, it was thought that something else was going on. As a result fracking was banned until further study.

After much consultation, the government in 2012 introduced legislation covering hydraulic fracturing that included a traffic light system in which if future fracking caused seismic events between 0 and 0.5M the operator could proceed, but with caution (amber); if above 0.5M it must suspend operations and monitor seismicity for a period (red). 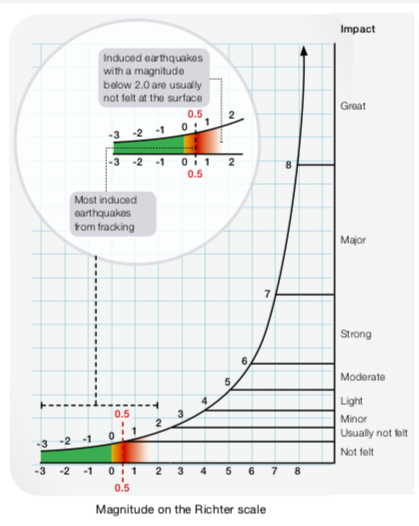 The traffic light system adopted for England and Wales. The Richter scale is logarithmic, so that a change of 1 represents a 10 fold change in magnitude. The 0 was arbitrarily set in 1935: modern instruments are more sensitive so can read less than 0 (www.ogauthority.co.uk).

The limit of 0.5M is less than humans can sense, and far less than other countries that allow fracking. For example many US and Canadian states have a similar traffic light system but with a limit of 4M, at which level seismic events are “often felt by people but rarely cause structural damage. Shaking of indoor objects noticeable.”

Having received permission Cuadrilla drilled two horizontal wells a few miles from the first one and carried out seventeen fracking operations in the first new well in September 2018. This time a large surface seismic array was installed around the well along with ground motion monitors and another array at the bottom of the third well. These systems detected 57 events of which three were amber and six were red. The highest movement was 1.5M and was felt near the wellsite.

It is very rare that such a large amount of data is recorded before and after a well is fracked, and unique that it was made available publicly. Such data is like nectar to researchers and petroleum engineers working on the subject. With it they could locate the subsurface source of the sound and hypothesize that some of the frack jobs had caused a previously unknown fault to slip a small amount. However there were still many aspects of the data that were hard to explain.

Examples of geological faults. A fault is a plane of weakness so an induced fracture, or the pressure from it, can cause the fault to move.

Then in August 2019, Cuadrilla started fracking the second new well. Three red events were detected shortly after one fracking operation, and later five more after another operation, the two largest being 2.1 and 2.9M. The latter caused a ground motion of 5-8mm and was felt widely.

The data is still being analysed, but it seems likely that the fault will take much of the blame. There may well be other factors. Some are related to the fracking operation itself, such as the volume of fluids injected and the procedures. Others concern the geology: for example a shale that has higher pressure than normal, like the Bowland in Lancashire, is more likely to create seismic events. Whatever the cause there were certainly a lot events that are red by the UK criteria, but would only be amber in the USA and Canada.

What is the chance of stronger events? There exists a database of human-induced earthquakes that lists events worldwide likely to have been induced by fracking. It shows events in China, Canada and the USA that are stronger than Cuadrilla’s but no more than 5.2M, all in areas that have been extensively fracked. Of course, there is no guarantee that larger events have occurred without being recorded, although at this level they would have propagated over a large area.

So is it the rocks or the people who are too sensitive? Probably both. Cuadrilla was unlucky to have encountered a sensitive fault in its first wells. But it seems the main issue is population density and people’s attitudes. In the empty plains of Texas an event of magnitude 2.9M will affect few if any people apart from the oilmen involved[1], and those that are affected may well be getting an income from the results. In the Lancashire countryside many more people will be affected, and most without a stake in the fracking. Rightly or wrongly they fear that more and larger events may occur.

In any case the Oil and Gas Authority, which is responsible for enforcing fracking regulations, decided on 2 September to suspend Cuadrilla’s fracking operations pending investigation. Unfortunately for Cuadrilla and the UK oil industry it seems likely that even if the rocks were to behave well, the people would not be ready to accept even small seismic events.

[1]One authority describes 4 to 4.9M as a noticeable shaking of indoor objects and rattling noises but none to minimal damage. Another estimates that at 4.5M ten per cent of buildings would have cracked plasterwork and 6 per cent are likely to suffer chimney failure.