Book Review: Amity and Prosperity: One family and the fracturing of America by Eliza Griswold

This is a complex and intriguing book, which seemed to get better the more that I read.  On one level, it blends a description of the main elements of fracking in the US with an account of the continuous and continuing physical problems suffered by Stacey Haney and her family and their neighbours , the Voyles. They, and their animals, apparently paid a significant health price for living too close to a fracking installation, whose operations fell well short of the ideal; on another level it is about the rights of those whose health is affected by fracking and the shortcomings of Government Agencies charged with enforcing environmental legislation.

Further on the focus shifts to the legal arena and the claim that that Range Resources, the owner of the installation in question, was directly responsible for the evident health problems which had dogged Haney and her neighbours as a result of fracking and/or polluted water.  The legal side of things was piloted by a dedicated husband and wife team, the Smiths, who spent literally years working away on a pro bono basis. But it became increasingly clear that it was tough to prove in law that there was a clear causal connection between the various sicknesses described and the activities of Range Resources:  partly as a result, the case dragged on for years. Eventually, continuing the fight looked to be too expensive and the outcome far from certain. An out-of-court settlement results.  Curiously, the way that the book is written means that this outcome produces a real sense of anti-climax. 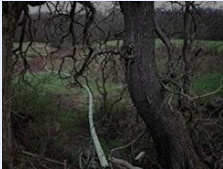 Certainly, there is a tendency to emphasise the “David and Goliath” aspect of the families’ long struggle, but there seems to be little doubt that on this occasion at least, Goliath won. What the book does make clear is how Goliath won and the sort of problems which David faced, not least the difficulty of going beyond anecdote to legal proof, even in the presence of environmental legislation designed to assist.

But the author, Eliza Griswold, also writes about the much more numerous people from the same Appalachian area who represented the other side of the coin, as it were. These are the people who benefitted from the jobs and the crucial financial support provided by Range Resources, when no one else was particularly concerned by the grim situation produced by the disappearance of the coal industry. And, of course, the unique status of mineral rights in the US where the owners of the land also own any minerals below. This was almost guaranteed to produce disputes between those who benefitted and those who saw themselves as paying a price for their neighbours’ good fortune.

Where the balance falls is the key question. And on “balance” the final paragraph of the book delivers a telling Parthian shot:  over sixty per cent of the residents of the area voted for Trump in the last American Presidential election.