Ilika made further progress towards commercialisation in 2018/19

Ilika is like a number of other start-up renewable energy companies quoted on London’s AIM. They are pioneers in trying to develop new technologies that help us reduce our reliance on fossil fuels. The problems that such companies face are that they struggle to find funds and take a long time to prove up their innovative products and bring them to market. Investors get impatient and stop investing. End of story. Ilika’s final results for the year ending 30 April 2019, however, show that money can be raised and it need not take a life time to ease into commerciality.

Ilika is a pioneer in developing solid-state battery technology and as a materials innovation company. It has developed a type of lithium-ion battery, which instead of using a liquid or polymer electrolyte, uses a ceramic ion conductor. Three or four years ago the company elected to focus its cell development on miniature devices suitable for powering sensors, sometimes called internet of things (IoT) end-nodes.

In 2016 and 2017 Ilika launched its StereaxTM M250 and P180 IP miniature solid-state batteries respectively. The Stereax, with its solid electrolyte claims several advantages over Lithium-ion, among which are higher energy density and faster charging. The recent version, the P180, has a temperature range from -400C to +1500C and is non-flammable.

Ilika achieved a stability of a kind in its financials. For the past five years the company revenue has hovered between £1m and £1.09m. Losses after tax have fluctuated between £2.7m and £3.5m.

This stability is because Ilika has been like an industrial research and development centre rather than a commercial enterprise. Revenue comes mainly from industrial and government grants: for example, in the financial year to April 2017 Ilika received 74 per cent of its revenue from Innovate UK.

Ilika’s final results for the year ended 30 April 2018 were released on 11 July 2018 and they showed that the company, in building a pipeline of licensing opportunities and partnerships, had begun a step-change out of its five-year results pattern by broadening development opportunities and pushing up revenue 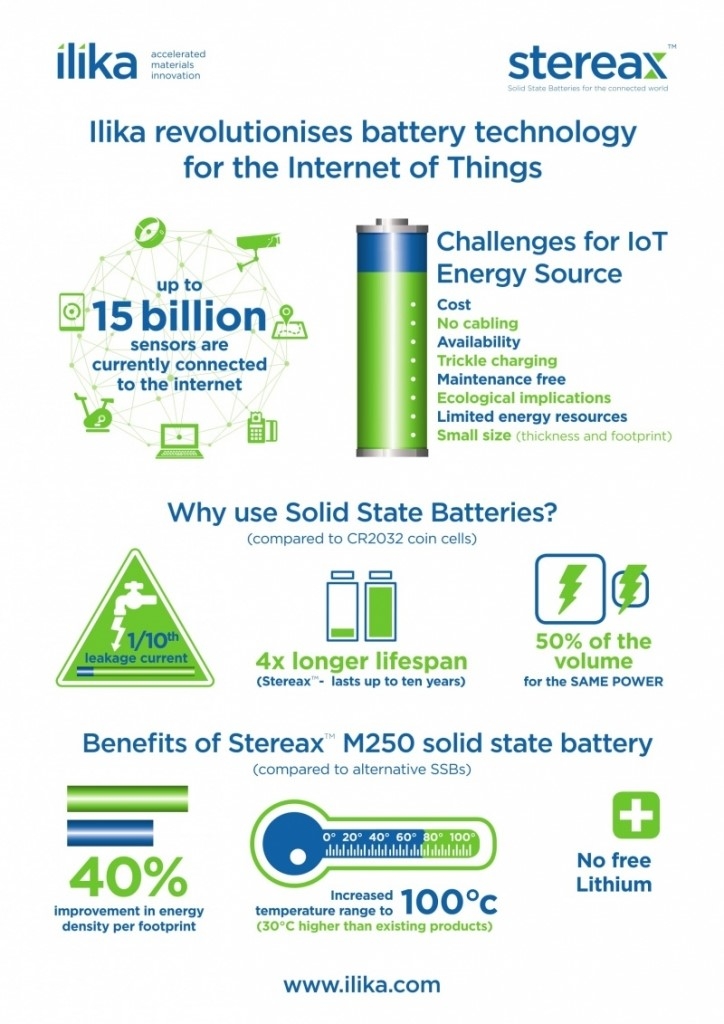 In March 2017 the company announced a two-year collaborative project with a well-financed bio-electrics company to develop a battery for miniature medical implants to provide treatments for serious health conditions.

In November 2017 Ilika announced a partnership to deploy Stereax powered devices for the condition monitoring of wind turbines with Titan Wind Energy, the largest manufacturer of wind turbines in China and 4th largest globally.,

Ilika reported that two new commercial partners have been added to the three mentioned above. These involve developing and deploying track monitoring devices with Network Rail and in January 2019 Ilika entered into a demonstration project to deploy its Stereax batteries to power its autonomous wireless sensor for environmental sensing and asset tracking. The company has also launched a new M50 cell, a new mm-scale product for MedTech.

Perhaps the most exciting new development in the period is the company’s involvement in the Innovate UK’s Faraday Battery challenge. Ilika has received a non-dilutive grant of £4.2m to develop large solid-state cells for automotive applications. This so-called “Goliath” project involves collaboration with Honda, Ricardo, McLaren A123 batteries.

Turnover in 2018/19 jumped 26 per cent to £2.6m (2017/18: £2.1m). The loss after tax for the year was £2.3m down from £2.9m the previous year. Cash, cash equivalents and bank deposits were £4m. Commenting on  the results Chairman Keith Jackson said: “The growth in Ilika’s research and development project funding is reflected in nearly 30 per cent turnover growth and stronger than expected year end cash balance. So, a further move towards commerciality was definitely registered.