Last year was yet another pivotal year for Active Energy Group (AEG) as it seeks commercial acceptance for its CoalSwitchTMproduct.

CoalSwitch is a technique that converts all types of biomass, including low quality forestry materials and wood waste, into pellets or briquettes that can be used directly in coal-fired power stations without substantial retrofitting.  The product is claimed to be hydrophobic, so that it does not degrade if left in the wet, and to produce a minimum of dust during transport and handling. The key process removes water and other undesirables from the biomass and essentially concentrates the flammable energy content.

With all these advantages one would expect there to be plenty of interest, even if the overall economics are not clear.  AEG started in 2015 with a small demonstration plant in Salt Lake City since the University of Utah had been involved with testing the product. This evolved into a prototype plant able to handle five tonnes per hour of biomass which went into operation in February 2018. However although several commercial ventures in the USA, South Asia and elsewhere have been announced in the last three years, none have come to fruition. 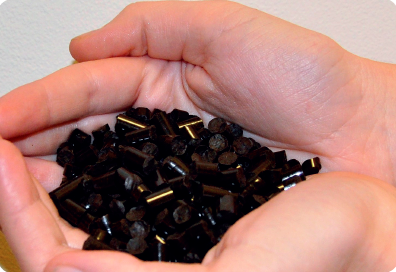 But in October 2018 AEG entered into a joint venture with Georgia Renewable Power LLC, a private company operating in the Eastern USA that is already involved in the conversion of coal plants to biomass. As a result AEG has moved its Utah equipment to a new site in Lumberton, North Carolina where it is expected to become operational in Q4 2019. It is then planning to build a new plant with a capacity of 50 tonnes per hour by the end of 2020. This should be able to fuel a 10 – 20 MW power station.

The US Eastern Seaboard location is well suited as there is a good local supply of biomass, especially lumber, and it is well located for export around the world. To help design and build this and other plants AEG has entered into collaboration with Andritz, a global engineering group.

At the same time a collaboration with Cobant in Poland to process waste coal stored in old coal slurry ponds is being pursued, although EU funding has not been obtained.

AEG has always operated as a group with affiliates. A second affiliate, Advanced Biomass Solutions, pursues opportunities in Asia. A third, Timberlands, is involved with forestry management with the idea that its wood products would feed the CoalSwitch affiliate. The forestry division used to predominate but in the annual report for 2018 published on 27 June the Board clearly stated that there would be “….a lesser focus on the feedstock supply issues” as “….each geography had its own special circumstances.”

Nevertheless on 26 November 2018, after a long pursuit, Timberlands finally obtained from the Newfoundland authorities two five-year commercial timber permits allowing it to cut up to 100,000 cubic metres per year of softwood from two areas in the north of the island. AEG is still deciding how best to exploit this.

To finance this AEG raised US$2.5m through two equity issues. So far in 2019 it has raised US$3.4m through the subscription of convertible loan notes to acquire the Lumberton site and a further £3.4m to accelerate development. With all this potential stock dilution the share price has fallen from around 3.5pence a year ago to 0.45p today, for a market capitalisation of £5.35m. It seems the market is still waiting to see whether the recent plans will get CoalSwitch going.