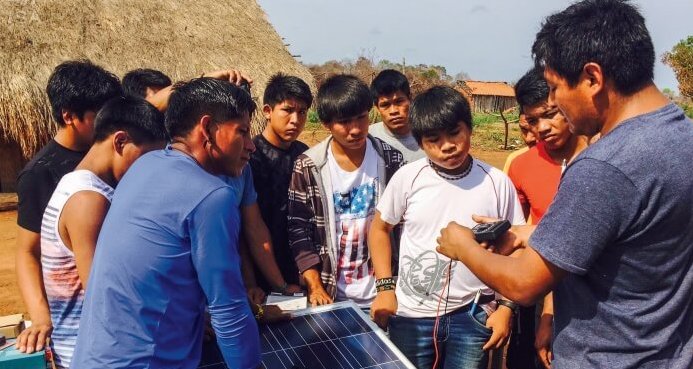 This article first appeared on the Climate News Network. Net

Brazilian Customs imagine that parts for a do-it-yourself solar power scheme in remote communities are luxury goods and tax them accordingly.

Since 2009, when the government of President Lula launched a national programme called Luz para Todos  (Light for All), Brazil has extended electricity to almost all corners of this vast country. The extra costs of extending the grid to more distant regions has been spread among all users.

But 47 localities, with a total population of 3 million people, still remain unconnected to the national grid, most of them in small, remote communities in the Amazon.

They include the 300,000 or so residents of Boa Vista, capital of the northernmost state of Roraima, which gets most of its energy from a hydro-electric dam across the border in Venezuela.

But with that country experiencing increasing chaos, with frequent blackouts, the supply has become unstable. When the power goes down, expensive thermo-electric plants running on diesel oil must be used, the oil brought by road from Manaus, 750 kms (465 miles) south.

Although Roraima enjoys even more hours of sunshine and strong winds than the rest of Brazil, these renewable alternatives have been largely ignored.

Boa Vista, though, is an exception. Most of those unconnected to the national grid live in small, isolated communities in the Amazon region. Some have diesel-powered generators, noisy, polluting and expensive, switched on for only 2 or 3 hours a day.

The disadvantages of living without a regular supply of energy are many – children cannot study at night, food cannot be preserved in fridges or freezers, fish catches cannot be sold, because without a freezer they will rot.

Health posts cannot stock medicines or vaccines. There is no TV, no access to the internet. Without a pump, people spend a lot of time on activities like carrying water.

“Inexplicably, the Brazilian Customs authority insists on taxing these imported components at 50%, as though they are luxury items”

The Ministry of Mines and Energy has plans to “universalise” energy provision, linking even these remote communities to the national grid within the next ten years. In some places photovoltaic panels have been installed, but their maintenance depends on technical assistance from the nearest town, which can be several hours’ boat ride away.

The proposed privatisation of the national energy company Eletrobras could also see an end to the plan to provide universal access, because profit-making companies will not want to spread the costs through higher tariffs.

Villi Seilert, a solar energy researcher, believes this top-down solution is not the answer. Together with engineer Edson Kenji Kondo, of the Universidade Católica de Brasília, he has developed what they call a social solar factory, a system of mini-factories which can be based in low-income communities, making cheap solar panels.

The idea was born during a project for start-ups developing innovative projects in the context of climate change, which at the same time offered decent jobs to people on low incomes.

At first they made solar panels out of recycled cartons. Then they developed a wafer thin panel with 6 photovoltaic cells, just 4.55 mm thick and weighing only 1.75 kg., making it easy to transport and mount. This is called the i920W-Slim.

A micro-system of these panels mounted on a roof generates 165 kilowatts of electricity a month, the average consumption of a low-income family in Brazil.

The idea is that local communities will easily be able to understand the technology, produce their own panels and generate their own electricity, without depending on outside companies or technicians.

Seilert reckons that 1,000 such mini-factories could be installed in 5 years – providing not only energy, but jobs as well.

He says two monitors could train up to 10 people in a six-day course, covering general principles, soldering techniques and mounting circuits.

The training venue and the factory can be set up in any available covered space. The kiln for firing the glass can be a pizza oven with a temperature regulator, transportable in the back of a car. Each panel will cost about US$40, $28 of it for components, including several that have to be imported from China.

Unfortunately, and inexplicably, the Brazilian Customs authority insists on taxing these imported components at 50%, as though they are luxury items, not basic elements for a low-cost energy system.

The basic cost of setting up a social solar factory varies between $2,000 and $3,000, plus the cost of accumulators or storage batteries.

Seilert is hoping to persuade local authorities, NGOs and local communities to give his project a go. He is trying to persuade the customs authority to lower the import tariff on the imported components, which would reduce the overall cost.

But while solar energy is definitely gaining ground in Brazil, with projects springing up in different places, the government remains wedded to the fossil fuel economy, unwilling to offer to renewables even a fraction of the subsidies, incentives and tax holidays they give to that sector.

So it is left to pioneers like Seilert to battle for recognition, and to NGOs and enlightened local authorities to fund projects,.One of the few mini-factories to have been successfully installed is in a prison in the central state of Minas Gerais, where inmates near the end of their sentences learn to make the solar panels. − Climate News Network

Jan Rocha is a freelance journalist living in Brazil and is a former correspondent there for the BBC World Service and The Guardian.