Ilika plc describes itself as a pioneer in solid–state battery technology and as a materials innovation company. It has developed a type of lithium-ion battery, which instead of using a liquid or polymer electrolyte, uses a ceramic ion conductor. Three or four years ago the London AIM-listed Ilika elected to focus its cell development on miniature devices suitable for powering sensors, sometimes called internet of things (IoT) end-nodes.

In 2016 and 2017 the London AIM- listed Ilika launched its StereaxTM M250 and P180 IP miniature solid-state batteries respectively. The Stereax, with its solid electrolyte claims several advantages over Lithium-ion, among which are higher energy density and faster charging. The recent version, the P180, has a temperature range from -400C to +1500C and is non-flammable.

Ilika has achieved a stability in its financials in that for the past five years the company revenue has hovered between £1m and £1.09m. Losses after tax have fluctuated between £2.7m and £3.5m.

This stability is because Ilika has been like an industrial research and development centre rather than a commercial enterprise, although it very much hopes to be the latter eventually.  Revenue comes mainly from industrial and government grants: for example, in the financial year to April 2017 Ilika received 74 per cent of its revenue from Innovate UK.

Ilika’s final results for the year ended 30 April 2018 were released on 11 July 2018 and they showed that the company, in building a pipeline of licensing opportunities and partnerships, had begun a step-change out of its five year results pattern, both in terms of broadening  development opportunities and pushing up revenue. 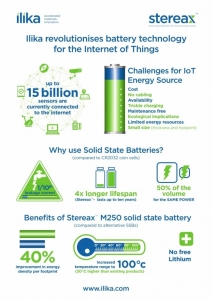 In March 2017 the company announced a two-year collaborative project with a well-financed bioelectrics company to develop a battery for miniature medical implants to provide treatments for serious health conditions, through the body’s own nervous system. The programme is supported by Innovate UK and the Medical Research Council.

It is always difficult to predict accurately what might happen to any company in the second half of its corporate year. But, it is a pretty safe bet that for Ilika revenue in the six months until April 2019 will equal or surpass the £2.1m in the comparable period in 2018. In the post-period the company secured £4.1m non-dilutive grant funding from Innovate UK’s Faraday Battery Challenge competition to develop large format “Goliath” cells in collaboration with automotive partners including Ricardo, Honda and McClaren for electric vehicle applications.

Ilika CEO Graeme Purdey, commenting on the progress being made, said the company had advanced the Stereax solid-state battery with a cumulative 90 potential OEM partners, including 14 where batteries have been shipped for evaluation. So, commercialism could be beckoning.