We often read that batteries can solve the problem of intermittency in wind and solar sources. Batteries can certainly help and are useful for short-term storage or time-shifting over a few hours. For longer periods of a day or more the size and cost of batteries become prohibitive and other solutions will be needed.

To understand why, consider the output from offshore wind farms off England and Wales in January 2019, shown below. 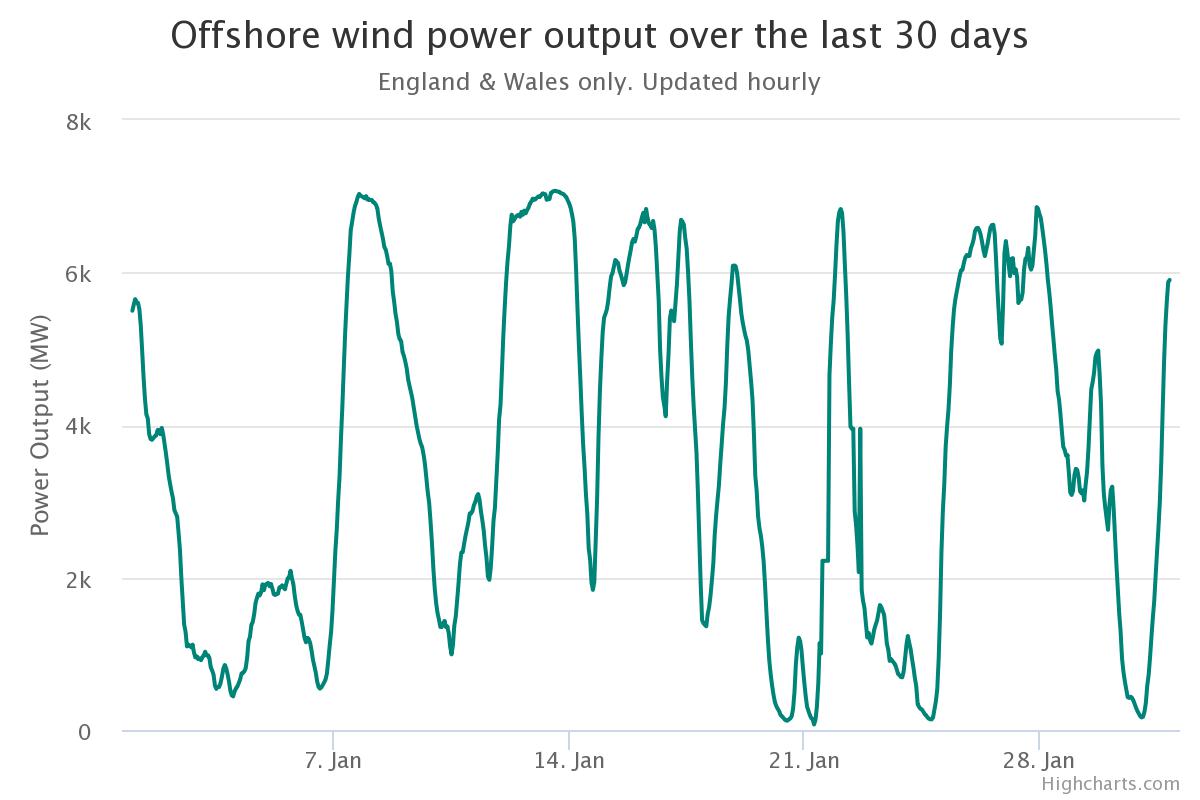 The total output from these wind farms in the preceding year was 26 terrawatt-hours of energy, corresponding to a continuous steady production of about 3000 Megawatts of power, or 3k in the chart above. However the output is highly variable. When the wind farms produce more than expected, other power sources – for example gas turbines – have to be turned down since priority is given to renewable sources. When they produce less than expected other sources have to be brought on line. The cold night of 30 January is an example: gas-fired plants supplied 50 per cent of our electricity, coal 16 per cent, nuclear 15 per cent, wind turbines 4 per cent, imports and other sources the remainder (Tony Lodge in The Times, 4 February).

With onshore and offshore wind currently providing less than 20 per cent of total UK power this variation can be handled fairly well (although there are many other variables making grid balancing a complicated process). But the Fifth Carbon Budget requires that in 2030 wind provides at least 35 per cent of UK power while the number of gas turbine plants is reduced.

The answer is storage but how much energy needs to be stored? Assuming for simplicity that demand was flat and that we cannot call on other sources of power, we would need enough storage to cover the longest period of low output. Take for example the five days from 2 to 7 January in which power is below the average for 114 hours.  Summing up the difference between the actual power output each hour and the average of 3000 gives a shortfall of 200,000 megawatt-hours (MWh). This is the amount of battery storage needed to cover this period.

To put this in perspective consider one of the largest batteries existing today, Tesla’s Hornsdale project in South Australia which can store 129 MWh in a volume of about 1200 cubic metres (40m by 15m by 2m high) and is reported to have cost US$50 million, about half of which are the Li-ion cells.

To cover the shortfall over those five days we would need 1550 such batteries for a volume of 1.9 million cubic metres, or an area of nearly 1 km by 1 km and 2 m high. The price would be £77 billion, far more than the cost of the wind farms themselves. 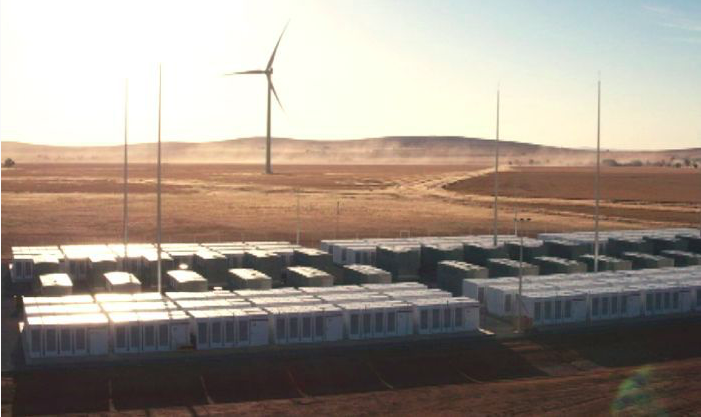 In practice other sources of renewable energy and imported power will help bridge the gap but at the cost of extra capacity. Of course it is probable that the batteries can be made more compact and less expensive, but by factors of two rather than ten. Since nearly double the amount of wind power is required by 2040 the cost of battery storage would remain enormous. In addition the five-day lull in January is not the longest observed. For eight days last summer wind output was well below average, and may have required even larger storage.

With batteries providing limited cover other types of storage must be looked at: pumped storage is an attractive solution but sites are limited; converting excess capacity to an easily stored gas such as hydrogen or ammonia is possible but not yet done on a large scale.  Hence for many years the most effective solution is likely to remain the gas turbine, hopefully fitted with a carbon capture system. It can be quickly turned on and off, while natural gas can be easily stored. Batteries will be reserved for time-shifting a few hours and for stabilising frequency and power output.