On 27 December 2018, AIM-quoted Altona Energy published its latest Annual report on the financial year ending 30 June 2018. Given that Altona listed on AIM as long ago as 2005, things still seem to be at a relatively preliminary stage. The story looks much as it was: Altona is a very small company, with a market cap of £1.2 million, trying to take forward, and keep control of, a huge project in Arckaringa, South Australia, where there may be as much as 7 billion tons of coal in place. The vicissitudes of Australian politics at the state and federal level are an added complication.

The Arckaringa project started life as “renewable” in that the idea was to first turn the coal into syngas, which could then be burnt. This concept was then abandoned in favour of focusing on developing a more conventional open-cast coal mine. (Australia is, of course a huge coal exporter. In 2017 record exports totalled 372 mn tonnes, worth around A$56 bn) But the Annual report notes that after the reporting period had ended an agreement was signed with Leinad Ltd giving Altona exclusive rights to that company’s pyrolysis technology in Australia and China. 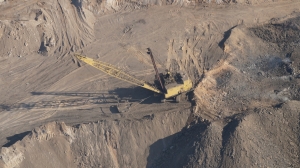 Pyrolysis is defined as a thermochemical treatment, which can be applied to any organic (carbon-based) product. In this treatment, the material is exposed to high temperature, and in the absence of oxygen goes through chemical and physical separation into different molecules.The process is irreversible. Altona also hopes to generate income elsewhere on the basis of their exclusive rights to Leinad’s technology in Australia and China. So maybe the end result is a return to some sort of “renewables” project.

At all events, the past does not seem to help much with the future. The report tells us that in F/Y 2018 pre-tax loss almost doubled to £ 645,000 from £341,000 in the same period last year, though it is only fair to point out that over the same period cash in hand grew from £15,000 to £391,000, not least because Altona raised over £1mn by issuing additional shares. The company attributes the larger loss to the cost of further non-drilling exploratory work, on the basis that when there is no off-setting revenue, losses reflect costs directly. (The table on page 36 of the report seems to tell us that “key management” in F/Y 2018 cost £243,000 by comparison with a figure of £178,000 for F/Y 2017 and that the Group and company averaged five employees, including directors, during the year ended 30 June 2018-in the previous period there were six.)

Looking forward may be more interesting. Page 38 of the current report tells us that the exploration licenses held by the group were renewed during the year and will need to be renewed again by June 2019. The minimum expenditure targets for the renewal of these licenses totals £2,240,000. There is apparently a work plan in respect of these targets, though no guarantee is given that it will be successful. In the event of failure to meet the minimum expenditure targets it would be possible for third parties to bid. But the directors think this is unlikely. They believe it to be more likely that the Group will be able to retain the licenses, albeit at a 25 per cent reduction of the expanse covered. Indeed, page 8 of the report states “Notwithstanding the losses incurred during the year under review, the directors have a reasonable expectation that the Group will be able to raise funds to provide adequate resources to continue in operational existence for the foreseeable future and meet the committed work programme. They will therefore continue to adopt the going concern basis in preparing the Annual report….”

All in all, Altona’s future prospects are not easy to discern. The shares have been falling in value over the last year and closed in London on 3 January 2019 at 70 pence, down from 100p at the end of 2018, reflecting the increased uncertainty caused by news of a recent dispute between the directors, yet to be resolved. So one can perhaps be forgiven for suggesting that the shares do not represent a suitable home for the widows and orphans fund.