Altona continues to look for a solution

Altona last appeared in Greenbarrel in February 2014. Since then there have been a lot of changes but little progress.

Altona hold licenses to explore the large Arckaringa coal deposits that lie below an uninhabited area of South Australia some 600 miles NW of Adelaide. At the time the licences were acquired in 2005 the intention was to extract coal from a conventional open cut coal mine, then process it in a Coal to Liquid (CTL) plant. Subsequent studies showed that a better economic solution was to build two plants, one for CTL and one for Coal to Methanol (CTM).

However in 2014/15 the drop in oil price and possibly the change in Australian government disrupted these plans. Costs were reduced by closing offices in Beijing and London. Qinfu Zhang became Chairman and replaced Michael Zheng as Chief Executive.

Above all, the objective was changed from CTL/CTM to underground coal gasification (UCG). The attraction of UCG is that most of the dirty work is done underground, but there are still unwanted gases, including CO2 and various contaminants. The CO2 can, however, be captured and sequestered back underground. 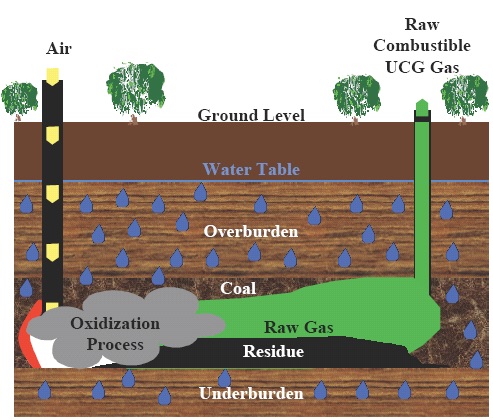 An illustration of the UCG process.

UCG has been tried several times in different parts of the world but has never been commercial. One project run by Linc Energy in Queensland was shut down in April by the state government on the grounds of contamination of the surrounding farmland. This was hotly denied by the company, which has since gone into liquidation.

Altona will now work on a three-year Bankable Feasibility Study for UCG. A technology report by mining services company Parsons Brinkerhoff has been completed. The next step is to drill some wells, but the South Australia government now says that a Petroleum Exploration License will be needed. As it happens, Linc Energy already held one in part of the area. Altona will probably need to acquire this, but it is not yet known who now owns it.

While all this is being sorted out, Altona have postponed a further issue of shares to one of their JV partners Sino-Aus and returned an initial payment of AU$5.4 million. Meanwhile the share price stands at 0.38p (52 week high: 1.3p, low: 0.28p).

Environmentally, the change to UCG is positive. Providing the CO2 is sequestered and the main contaminants captured, the project should prove to be similar in environmental impact to oil and gas extraction. Economically, the change brings more uncertainty from a commercially unproven technology at a time when oil and gas prices are low.

The large coal volumes and the emptiness of the area will always make Arckaringa a tempting resource to exploit. How best to do so remains unclear.