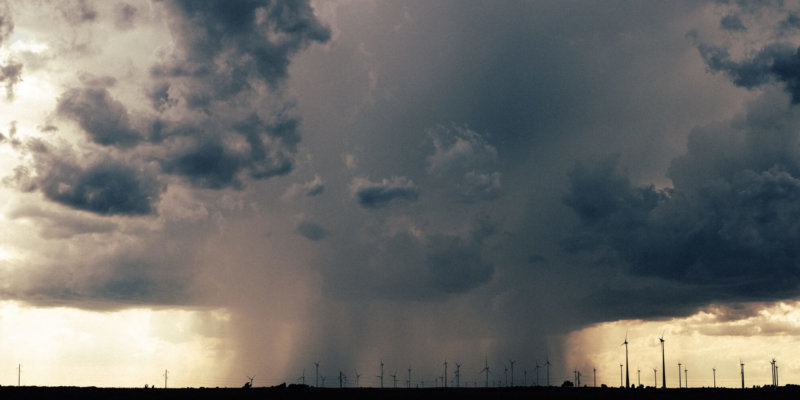 US scientists have identified yet another wonder of that icon of renewable energy, the offshore wind farm: they may result in weakened hurricanes. Turbines in the right place could not just take the heat out of a hurricane, they could reduce the risk of catastrophic flooding as well.

The prediction is based entirely on computer simulation: the US so far has just one 30MW commercial wind farm in operation with just five turbines, off the coast of Rhode Island.

But the reasoning begins from the basic laws of physics, and the answer delivers yet another argument for investment in renewable sources of energy, if only because the ferocity and destructive power of US hurricanes is set to increasewith ever-greater emissions of greenhouse gases from fossil fuel combustion, and consequent ever-greater global warming.

Cristina Archer, a scientist at the University of Delaware, has already studied the ideal placing of wind turbines to extract maximum energy from the world’s winds, and more recently confirmed, with other researchers, that any hurricane that blew over a big enough marine wind farm would shed energy and hit the land with less destructive power.

“If you have arrays of wind turbines in the areas where there are hurricanes, you will likely see a reduction in precipitation inland”

It is an axiom of physics that energy is always conserved: if a turbine’s sails generate electrical energy from wind, then some of the kinetic energy of the wind must be surrendered.

Professor Archer and her colleagues report in the journal Environmental Research Letters that they took, among others, the case of Hurricane Harvey, which in 2017 deposited almost two thirds of a metre of rainwater on Houston, Texas, to cause devastating floods. They tested the behaviour of the simulated hurricane as it blew across a hypothetical barrier of from zero to 74,619 turbines.

When strong winds hit the turbines, they slow down. Wind scientists call this convergence. Winds slow, and are more likely to dump the water they hold, and then rise. Then the winds speed up again, a phenomenon known as divergence.

“Divergence is the opposite effect. It causes a downward motion, attracting air coming down, which is drier, and suppresses precipitation. I was wondering what would also happen when there is an offshore farm”, she said.

The researchers modelled a range of simulations with hypothetical wind farms staggered along the coasts of Texas and Louisiana. Hypothetical hurricanes caught up in a pattern of convergence would drop their rain before they hit the coast, and then begin divergence, which would mean that even less rain would be carried to landfall.

“By the time the air reaches the land, it’s been squeezed out of a lot of moisture,” Professor Archer said. “We got a 30% reduction of the precipitation with Harvey simulations. That means, potentially, if you have arrays of wind turbines in the areas where there are hurricanes, you will likely see a reduction in precipitation inland if the farm is there.”

This doesn’t mean that wind farms can always take the heat out of a hurricane: important factors include the hurricane’s precise track and the distance offshore of the turbines. There are no wind farms anywhere in the world with the tens of thousands of turbines modelled in the simulation: one of the world’s biggest, off Anholt Island, Denmark, has only 111 turbines.

“The more windfarms you have, the more impact they will have on a hurricane,” Professor Archer said. “By the time a hurricane actually makes a landfall, these arrays of turbines have been operating for days and days, extracting energy and moisture out of the storm. As a result, the storm will be weaker. Literally.” − Climate News Network

Alex Kirby is a former BBC journalist and environment correspondent. He now works with universities, charities and international agencies to improve their media skills, and with journalists in the developing world keen to specialise in environmental reporting