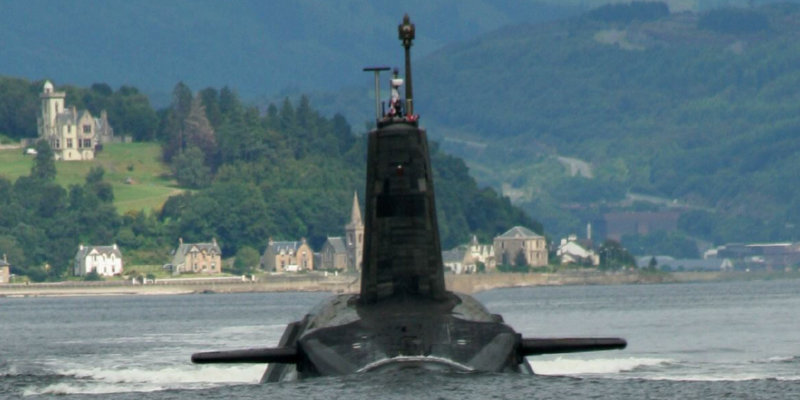 A British nuclear-armed submarine: Sustained by the civilian industry. Image: By bodgerbrooks, via Wikimedia Commons

Officially the UK nuclear industry is going ahead with building a new generation of power stations. But it can’t find anyone to pay for them.

The future of the UK nuclear industry looks increasingly bleak, despite the Conservative government’s continued insistence that it wants to build up to 10 new nuclear power stations.

One of the flagship schemes, the £15 billion ($19.5bn) Moorside development in Cumbria in north-west England, made 70 of its 100 staff redundant in September because the current owners, Toshiba, are unable to finance it and cannot find a buyer.

Tom Samson, the managing director of NuGen, the company set up to construct the power station, said he was fighting “tooth and nail” to save it but that there was “a real danger” the whole idea would be abandoned.

With renewable electricity becoming much cheaper than new nuclear power in the UK, the proposed stations have the added disadvantage that they are remote from population centres and would need expensive new grid connections.

There seem to be two main reasons for the government’s continued enthusiasm for nuclear power – the need to keep the nation’s nuclear weapons properly maintained, and political considerations about providing new jobs in remote areas where there are already nuclear installations that are being run down or decommissioned.

Martin Forwood, from Cumbrians Opposed to a Radioactive Environment, said: “I have never thought that Moorside would go ahead. It was always about sustaining jobs at Sellafield where the nuclear reprocessing works are all being closed down. The place is the wrong end of the country from where the electricity is needed.”

Moorside was to be taken over by the Korean Electric Power Corp. (Kepco), “the preferred bidder”, and the company is still in talks with Toshiba, but has lost support from the South Korean government and is unlikely to proceed.

A similar affliction of lack of financial backers is affecting plans by another Japanese giant, Hitachi, to build an equally ambitious project at Wylfa on the isle of Anglesey in Wales. This is also a remote site with an existing but redundant nuclear station and, coincidentally, a marginal constituency where voters badly need new jobs.

Again, finding a company, or even a country, with deep enough pockets to help build this power station is proving difficult, even though the UK government has offered to underwrite part of the cost.

The only project that is going ahead so far is at Hinkley Point in Somerset in the west of England, where the French nuclear company EDF is set to build two of its new generation reactors.

More than 3,000 people are already working on the site, but its future still remains in doubt. This is because of the difficulties both of building what appears to be a troublesome design, and of the French state-owned company’s own debts.

In France EDF has 58 ageing reactors in its fleet, most of which need upgrading to meet safety requirements, with others more than 40 years old due for closure. The costs of the upgrades plus the decommissioning will create an even bigger debt problem, making investment in new reactors virtually impossible.

This financial hurdle may yet halt construction of Hinkley Point’s twin reactors, effectively killing off nuclear new build in Britain. Officially, however, the Chinese are still hoping to build a reactor at Bradwell, east of London, and EDF two more reactors at Sizewell in Suffolk, further east on the coast of England.

Already there are doubts about these, and in any case they are years away from construction starting. Other proposed projects have disappeared from sight entirely.

At the heart of the problem is the immense amount of capital needed to finance the building of reactors, which typically double in cost during lengthy construction periods, with completion delays, in the case of the French design, stretching to ten years or more.

Faced with the fact that even the largest companies with plenty of money are reluctant to invest in nuclear power, many countries have abandoned their nuclear power programmes. The exceptions are countries that have nuclear weapons, or perhaps aspire to have them in the future.

After 40 years of denials Western governments have openly admitted in the last two years that their ability to build and maintain their nuclear submarines and weapons depends on having a healthy civil reactor programme at the same time.

The military need highly skilled personnel to keep their submarines running and to constantly update their nuclear weapons, because the material they are made of is volatile and constantly needs renewing. Without a pool of “civilian” nuclear workers to draw on, the military programme would be in danger of crumbling.

Phil Johnstone, a research fellow at the University of Sussex, UK, who has researched the link between civil and nuclear power, said: “A factor in why the UK persists so intensely with an uneconomic and much-delayed new nuclear programme and rejects cheaper renewable alternatives, seems to be to maintain and cross-subsidise the already costly nuclear submarine industrial base.

Andy Stirling, professor of science and technology at the Science Policy Research Unit at the same university, added: “Given the remarkable lack of almost any discussion that a key driver for civil nuclear is supporting the costs of the defence nuclear programme – either in official UK energy policy or formal scrutiny by official bodies – this raises significant concerns about the state of UK democracy more broadly.”

Despite these setbacks the nuclear industry is still pushing the idea that new stations are needed if the world, and particularly the UK, are to meet their climate targets. The New Nuclear Watch Institute (NNWI), a British think tank funded by the nuclear industry, has produced a report saying that only with new nuclear stations could the UK hope to meet its greenhouse gas targets.

Tim Yeo, chairman of NNWI, said: “We often hear that new nuclear build is expensive. It turns out that, in fact, if all hidden costs are factored in, abandoning nuclear comes at an even higher price.

“If the UK is to successfully meet the challenges faced by its power sector, the world’s only source of low-carbon baseload power generation – nuclear – must feature strongly in its ambitions.” – Climate News Network

About the author:Paul Brown, a founding editor of Climate News Network, is a former environment correspondent of The Guardian newspaper, and still writes columns for the paper.