Wind and solar power can green the desert 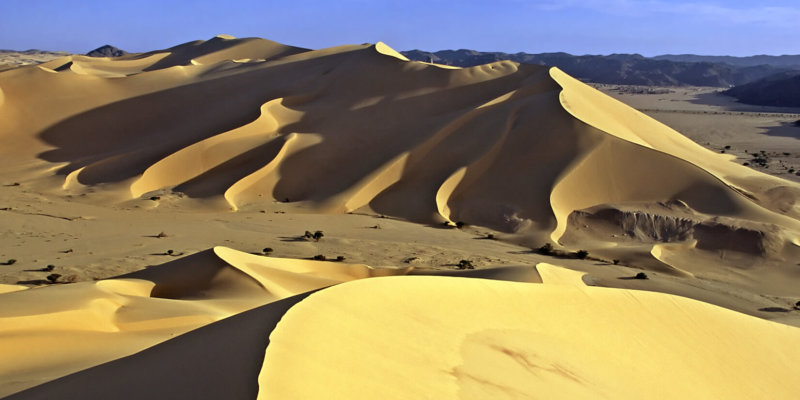 Cover enough ground with wind turbines and solar panels, and you change the local climate, green the desert and could even boost the Sahara’s rainfall.

LONDON, 19 September, 2018 – Wind and solar energy could deliver more than just renewable, low-carbon electricity: they could green the desert, increasing the Sahara’s rainfall and helping it to bloom.

A sufficiently large network of wind turbines and solar panels arrayed across the dusty wastes of North Africa could change the local climate in ways that could double rainfall, stimulate vegetation growth and set up a feedback loop that could go on increasing moisture in the world’s greatest desert region.

The array of wind turbines and solar panels so far remains hypothetical: to green the Sahara even a little, it would have to extend over 9 million square kilometres – an area bigger than Brazil.

The combined power output from this entirely imaginary infrastructure however would be enormous, at more than 80 terawatts of electrical power. Global consumption in 2017 was only 18 terawatts.

The study is an exercise in climate modelling: were investors to exploit the Sahara desert and the Sahel, what would all that hardware do to the land on which it stood?

Researchers have already established that wind turbines actually do change the prevailing winds: they convert high winds to a mix of electrical energy and lower wind speeds.

Similarly, light-absorbing photovoltaic cells on the ground would change the reflectivity of the surface on which they stood, and there is a demonstrable link between what climate scientists call albedo, and local climate.

Researchers chose to model the impact of renewable energy infrastructure on the Sahara because it is relatively empty, sunlit and windy. They matched the results with experiment.

They report in the journal Science that they found that wind farms mix warmer air from above, to raise minimum temperatures and create a feedback loop that drives greater evaporation, precipitation and plant growth.

Over the Sahara proper, rainfall increased by 150%, but since the desert is very dry the increase is relatively small. In the Sahel region to the south, a dry landscape of scrub, savannah and woodland, stretching from the Atlantic to the Nile, the simulated wind farms stepped up rainfall by 1.12 millimetres a day.

This is more than double the average observed in a control experiment, and what could amount to an extra 500mm a year could have “major ecological, environmental and societal impacts,” the scientists say.

“Previous modelling studies have shown that large-scale wind and solar farms can produce significant climate change on continental scales,” said Yan Li, an environmental scientist at the University of Illinois, one of the chief authors.

Solar arrays had very little effect on wind speed, but these too triggered a change in local conditions. The solar panels – and the wind turbines – together created a darker, more broken surface, a change that once again favoured around 50% more rainfall, and more vegetation growth, which in turn could promote even more rain.

Two centuries of exploitation of fossil fuels has driven economic growth everywhere, but at a cost in ever greater ratios of greenhouse gases in the atmosphere. The planet is warming, and increasing extremes of heat, drought and storm threaten to change climates with catastrophic consequences, drying up water supplies, advancing the desert regions and creating millions of climate refugees.

So the case for renewable energy is easily made, and five years ago researchers began looking to the North African countries as potential providers of renewable power. And the latest study makes the point that such investment could actually be beneficial in unexpected ways.

“The increase in rainfall and vegetation, combined with clean electricity as a result of solar and wind energy, could help agriculture, economic development and social well-being in the Sahara, Sahel, Middle East and other nearby regions,” said Safa mottersharrei of the University of Maryland, another of the authors. – Climate News Network.