Ilika plc describes itself as a pioneer in solid–state battery technology and as a materials innovation company, that has developed a type of lithium-ion battery, which instead of using a liquid or polymer electrolyte, uses a ceramic ion conductor. Two or three years ago the London AIM-listed Ilika elected to focus its initial cell development on miniature devices suitable for powering sensors, sometimes called internet of things (IoT) end-nodes.

In 2016 and 2017 the London AIM- listed Ilika launched its StereaxTM M250 and P180 IP miniature solid-state batteries respectively. The Stereax, with its solid electrolyte claims several advantages over Lithium-ion, among which are higher energy density and faster charging. The latest version, the P180, has a temperature range from -400C to +1500C and is non-flammable.

We wrote about Ilika on 6 December 2017 and reported that a  recent trading statement said: “Financial results for the six months to 31 October 2017 are expected to show an increased revenue of £1 million, up three-fold from £0.3m for the same period last year.  Operating losses also dropped to £1.4m (H1 2016: £1.9m).”

This increase should be put in context of the last five financial years during which Ilika’s revenue has stayed between £1m and £1.09m, except in 2016 when it dropped to £0.6m. Losses after tax have fluctuated between £2.7m and £3.5m.

This remarkable stability is because Ilika is more like an industrial research and development centre than a commercial enterprise, even if it hopes to become the latter eventually. Revenue comes mainly from industrial and government grants: for example, in the financial year to April 2017 Ilika received 74 per cent of its revenue from Innovate UK.

The company itself says: The company’s revenue model involves three phases of activity: a) commercially-funded and grant-funded development projects:  b) IP (Intellectual Property) licensing; c) receipt of royalties when products incorporating Company IP reach market. The Company is currently in the first phase of activity, with its revenue being generated from development fees.

Ilika’s final results for the year ended 30 April 2018 were released recently (11 July 2018) and they show the Company has built a pipeline of licensing opportunities to support the start of its second phase of revenue generation. Put another way the final results demonstrate that Ilika has made a step change out of the five year results pattern, both in terms of broadening its range of activities and achieving a substantial leap up in revenue. 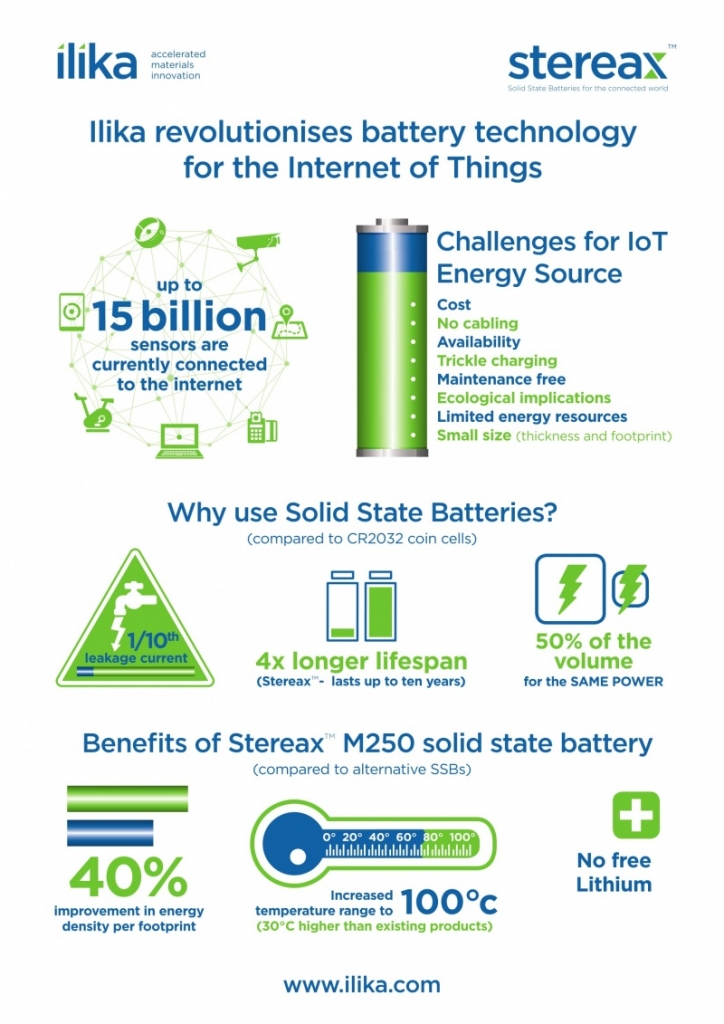 Operationally, the company has started to implement development programmes with three commercial partners:-

In March 2017 the company announced a two-year collaborative project with a well-financed bioelectrics company to develop a battery for miniature medical implants to provide treatments for serious health conditions, through the body’s own nervous system. The programme is supported by Innovate UK and the Medical Research Council.

In November 2017 Ilika announced partnership to deploy Stereax powered devices for the condition monitoring of wind turbines with Titan Wind Energy , the largest manufacturer of wind turbines in China and 4th largest globally.

Ilika is also in collaboration with 8 OEM’s (original equipment manufacturers) to develop new functional materials. These include:

The award of a grant to develop protected anodes for lithium sulphur batteries with Johnson Matthey.

The award of a grant to develop photonic materials for Hard Disk Drives, with Seagate

The development of superalloys with Rolls Royce.

The development of self-healing alloys with BAE Systems and GKN.

A post year end offer of £4.1m grant funding from The Innovate UK Faraday Challenge to develop large solid state cells for the automotive industry in collaboration with Honda, Ricardo, McLaren and A123 batteries.