On 29 May Proton Power Systems (PPS), the maker of hydrogen fuel cells from their factory near Munich, reported revenues of £1.12 million for 2017, down 44 per cent from £1.99m in 2016, but close to the average of £1.07m for the years 2013-15. The reason for the increase in 2016 was a large order from DB Bahnbau Gruppe for emergency power supplies based on fuel cells. DB Bahnbau provides engineering services for the German rail network.

PPS also reported a reduction in operating loss from £7.58m in 2016 to £5.75m in 2017. The cost of sales is greater than the revenue generated, hence the more sales the larger the loss.

While sales to Germany dropped significantly in 2017, sales to the rest of Europe increased strongly from £0.12m to £0.72m. This is mainly due to the delivery of an order for £0.5m to the Orkney Surf and Turf project. 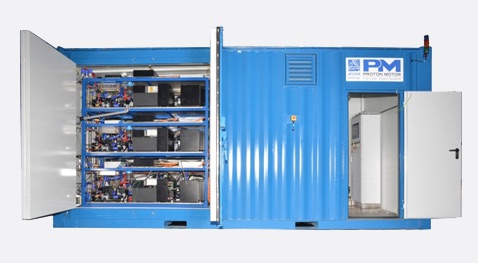 This project is designed to make use of the excess power generated on the island of Eday by a wind turbine and by the tidal experiments of the European Marine Energy Centre based on the island. As there is no grid connection to the mainland there is plenty of excess power, which is used to generate hydrogen in an electrolyser. The hydrogen is taken by land and ferry to Kirkwall harbour where it is converted to electricity by three 25kW fuel cells from PPS (provided through an installer, Arcola Energy).

This project is an interesting illustration of the use of hydrogen as a means of storing renewable energy. However it also illustrates the main current limitation, which is the transport of the hydrogen.

PPS are very positive about the future of the fuel cell market for both mobile and stationary power, but they have not yet found a consistent stream of profitable revenue.  New fourth generation systems to be introduced in 2018 might help as they are lighter, more efficient and more integrated. The company also increased its manufacturing capabilities to 1000 fuel cells a year in 2017 and plans a further increase to 5000 by the end of 2018. This should decrease the fuel cell costs, but will require a very large increase in sales in order to translate into an operating profit.

It would seem that the company is unreasonably dependent on these two lenders, but it turns out that Falih Nahab is the brother of PPS’s CEO Felix Nahab while Roundstone is a private equity company run by Felix and his family.

In its Annual Report PPS says “..it is expected that these loan agreements will be extended or renewed as required for the foreseeable future. Whilst support has been committed from the shareholders for at least the next 12 months, the Board recognises that the Group must show improved financial performance to warrant further financial support”.

Market capitalisation stands at  £29.34m for a share price of 4.55p, in the middle of its range for the last four years.