These figures need to be seen in the context of today’s market cap of £34.7m and total accumulated tax losses of £47.3m which could be handy when (and if) Quadrise eventually make a profit.

Quadrise was founded in the 1990s by a group of former BP specialists to produce MSAR (Multiphase Superfine Atomised Residue) a low viscosity fuel oil, which combines heavy fuel oil (HFO) and water to create an emulsion. The resulting mixture is cheaper than the traditional recipe of heavy fuel oil blended with enough refined products to get the fuel oil to flow as a liquid. There are two main commercially viable processes for the use of MSAR, as fuel for ships and in power generation. In both cases that means working with large organisations. 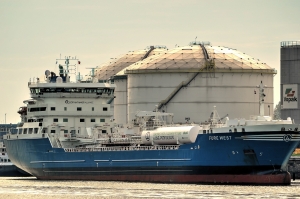 A year ago, Maersk, the world’s largest shipping company was in the process of evaluating MSAR on a trial basis. At that time, the cost advantage over traditional fuel oil was thought to be important in the shipping industry where typically open ocean marine costs represent around 75 per cent of operating costs. But in October 2016 the International Maritime Organization (IMO) decided to implement a 0.5 per cent sulphur limit with effect from January 2020, rather than from 2025. MSAR is not a particularly low-sulphur fuel and the IMO decision led Maersk to bring the trial to a conclusion and to announce in May 2017 that it would opt for a combination of low-sulphur fuel and scrubbers to comply with the new global sulphur cap. So while Quadrise is working on contacts with other shipping companies on the basis of the positive technical results which emerged from the trial, the Maersk decision put paid to any prospects of early commercialisation.

The other main use for MSAR is as a feedstock for power generation. The kingdom of Saudi Arabia (KSA) is the world’s largest market for the consumption of crude-oil and HFO for power generation, and Quadrise sees enormous opportunity in the region. The company has been working for some time with a client in the KSA on a trial basis. This cooperation continues, but here too any purely commercial activity is some way off. As a result, in August 2017, so after the end of the report period, the company put in place a number of measures to reduce costs in the immediate future.

However, brighter prospects for the longer-term caused the Executive Chairman of Quadrise, Mike Kirk to comment as follows:- ‘The anticipated substantial widening of the product spread between HFO and distillates is supportive of Quadrise’s business model in the medium to longer term and provides a positive backdrop for our continued business development activities in both the power and marine sectors during the current year and beyond’.