BOOK REVIEW: RIVER OF LIFE, RIVER OF DEATH: The Ganges and India’s future. Published by the OUP 2017 price £20

On one view, this book tells us hard truths about the environment in India, on another it reflects the somewhat obsessional interest in the river Ganges of its author, Victor Mallet, the Financial Times’ Delhi-based correspondent from 2012 to 2016. His thesis is that India is killing the Ganges with pollution and the polluted Ganges is, in turn, killing India.

The book is organised as a sort of voyage downriver, so the first chapters deal with the big picture and the effect of climate change on the upper reaches of the river. The Ganges begins its journey as melt water from glaciers, which, as a result of global warming, have already retreated substantially from their historical markers. The likelihood is that, at present rates of carbon emissions, more melting and more retreat will have a devastating effect on a population of India which will soon be nearly a quarter of the planet.

The author also records the wide-spread view that global warming was responsible for the severe storms in 2013 which swept away whole towns and villages in the upper Himalayas. It is daunting to reflect that, according to the calculations of some scientists, by 2080 the average temperature in North India could have risen by between three and five degrees: an enormous amount in a life time, with profound consequences, not least for the elderly during the hot season.

The next few chapters have a somewhat different focus: Mallet explores Hindu religious belief in the holiness of the  river and investigates the theory that the acknowledged “purity” of the Ganges might be the result of anti-bacterial agents in the water called bacteriophages” (Interestingly, there was a belief among white water rafters in Nepal in the 1990s that the clay in suspension in the rivers somehow offered protection against disease). 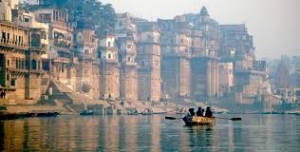 India is killing the Ganges with pollution and the polluted Ganges is, in turn, killing India

Yet there is no denying  the manifest increases in man-made pollution which pour into the river as the population of India swells and the country industrialises. The lack of toilets, let alone functioning sewers, has turned the Ganges into a virtual sewer, with 3,000 million litres of raw sewage entering the river every day.

It is scarcely surprising that this, combined with all sorts of industrial waste, has had a highly toxic effect on the river. The problem has been widely recognised by politicians, but they have yet to get beyond announcing elaborate plans for clean-up initiatives which are never implemented. In this respect, Modi, the current Prime Minister of India, has done no better than his predecessors.

But as a result of this pollution burden, the river has become a veritable laboratory for the production of antibiotic-resistant microbes which may herald the return of diseases once thought to have been conquered for good. As the author makes clear, the ready availability of Intercontinental travel means that this is not a menace which is confined to the sub-continent and those who live there.

It is a potential threat to us all. Of course, the increase in the population of India from 300 million in 1947 to 1.3 billion souls today has done nothing to help the situation and Mallet examines the radical case for limiting population growth. He concludes that, for historical and other reasons, the chance of any Governmental action on this front is remote.

The concluding chapters are perhaps of more interest to those who are fascinated by India, than to those who are concerned about the  environment. Future prospects are frankly between grim and alarming. But, as Mallet points out, there are optimists who point to the successful cleansing of the Thames and the Rhine and argue that there must be hope for the Ganges. Let us hope they are right.

At all events, for environmentalists there is much to read and ponder in this book. Those who are also India-lovers will additionally be absorbed in this particular take on the familiar challenge of trying to run a hundred yards race while simultaneously tying the laces of the running shoes.