Minesto shows how flying kites under water can generate electricity

Minesto is a Swedish company that generates electricity by “flying” kites under water. This seemingly bizarre idea is best understood by thinking of a kite flying in air that is induced to follow the trajectory of a figure of eight. At the extremes of the trajectory, and at other points, the kite is flying at several times the background wind speed.

Flying a turbine in air is not practical, but doing the same under water is possible. Water does not flow at such high speeds as air, but it is several hundred times heavier. This increases the force turning the turbine and partially compensates for the lower velocity. The kite must be sufficiently buoyant that it does not sink to the bottom when the tide speed goes to zero as it turns. It is tethered either to the seabed, or in deep waters to a floating platform, with the electrical power being sent through the tether. 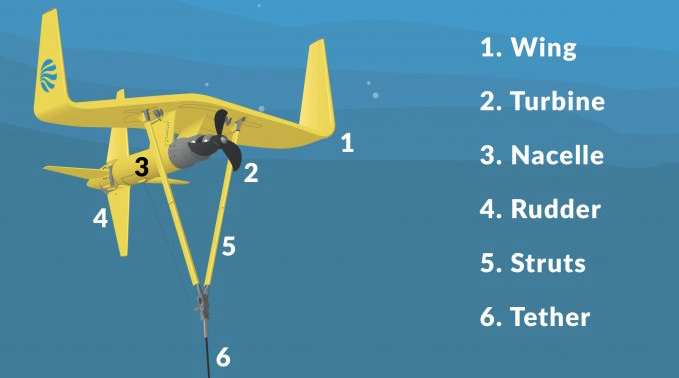 One of Minesto’s Deep Green kites. The wingspan of the prototypes is 3 metres, but future wingspans of up to 24 metres are envisioned. (www.minesto.com)

Minesto have been working on this idea since 2007. By 2013 it had built a prototype with a three-metre wingspan which was tested in Strangfjord Lough, south of Belfast. This large seawater lough has a long, narrow opening to the Irish Sea, so that when the tide changes the water speed and turbulence are particularly high.

Strangfjord Lough is still used for testing but for commercial operation Minesto have been targeting deeper, more consistent tidal streams and ocean currents. The first full scale system, known as Deep Green, was installed in the Holyhead Deep, off Anglesey, where the tidal stream is modest but the water is up to 100m deep, and therefore out of the way of shipping, but within 8 km of the port of Holyhead. The 0.5MW capacity system was successfully commissioned in 2018. Minesto have recently submitted a proposal for an array of kites to reach a capacity of 80MW.

The first commercial example of Deep Green was installed in a tidal stream up to 50 metres deep in the Faroe Islands. Two kites, each of 0.1MW capacity, first delivered electricity to the grid in December 2020. The system will be upgraded to give 1.2MW, while projects are also under way to tap a tidal stream off Brittany and an ocean current off Taiwan.

Minesto was founded as a spin-off from Saab, where the original idea germinated. To start with the company was funded mainly by venture capitalists with some support from the Swedish government. In 2015 it listed on the Nasdaq First North Growth market and raised €14m in its IPO as well as receiving €13m from the EU Regional Development Fund.

This intriguing technology will have fans because, like other marine energy systems, it is based on the very regular energy from tidal streams and ocean currents and is mainly hidden from view. Unlike other such systems it is smaller and can work at depths below 60m. The ingenious kite effect allows it to work in low to moderate tides and currents (1.2 to 3 metres/sec), but it will still be competing with other users of near shore waters, such as fishermen and shipping lanes. Deep sea installations are not impossible but would obviously add to maintenance and connection costs. The effect of a moving kite on marine life has not yet been addressed but will no doubt receive attention if Deep Green is employed extensively.

So far nothing has been published on the costs of the electricity to be produced. One might suspect that maintenance costs could be high and the life of a kite short. Assuming the cost is reasonable, the technology is clearly of interest for islands and remoter seaside communities. Whether it can expand into other, larger markets remains to be seen.