This is the first of two articles on community based renewable energy projects in remote locations and the problems they can encounter. This first piece concerns marine tidal turbines

The Shetland Islands are 106 miles north of John O’Groats in Scotland and they are thus very remote from UK mainland energy infrastructure. They are said to be the windiest place in the British Isles with winds blowing 50 per cent of the time. Also, there are some fierce tidal races between the islands. This, you would think, would make the Shetlands ideal for small to medium-sized renewable energy schemes such as onshore wind farms and, a latest favourite among renewable schemes, marine current tidal arrays.

Moreover, speaking of arrays, there is a wide array of subsidies and assistance available for such schemes from the Scottish government, not to mention large dollops of cash from the EU that can be forthcoming for approved projects. The Shetlands therefore look like a perfect place to encourage community involvement in such facilities. But the execution of a facility can prove more difficult than having a dream about it.

One offshore tidal array scheme was launched in 2013 in the Bluemull Sound between the islands of Yell and Unst in the north of Shetland where the North Sea meets the Atlantic. Marine turbine maker Edinburgh-located Nova Innovation got together with the North Yell Development Council (NYDC), a community group based in the small fishing village of Cullivoe on the northernmost tip of Yell. In 2014 a 30 kilowatt (kW) M30 was installed in Bluemull Sound. This Nova designed machine was meant to be the forerunner of a much larger scheme which was to be funded by £3.75million raised, with £1.9m chipped in by the Scottish government via Scottish Enterprise and the Renewable Energy Investment Fund.

Technically the community owned the machine thanks to a £150,000 Community Energy Scotland grant, which was backed by £13,000, from Shetlands Islands Council and £1,200 from the NYDC itself. The turbine was launched with great fanfare with luminaries saying how proud they were to have launched the first tidal station which would feed into the Shetlands grid. This initial turbine was to power the Cullivoe ice factory along with a small industrial estate and 30 homes.

Less than a year later the collaboration between the community and Nova  acrimoniously fell apart. The turbine was switched off because it was said to be draining more energy than it was producing. Speaking at the time, Andrew Nisbet the Secretary of the NYDC said there was bad feeling between the partners. He said: “The machine has been decommissioned and it is now Nova’s responsibility to remove it from the seabed”. 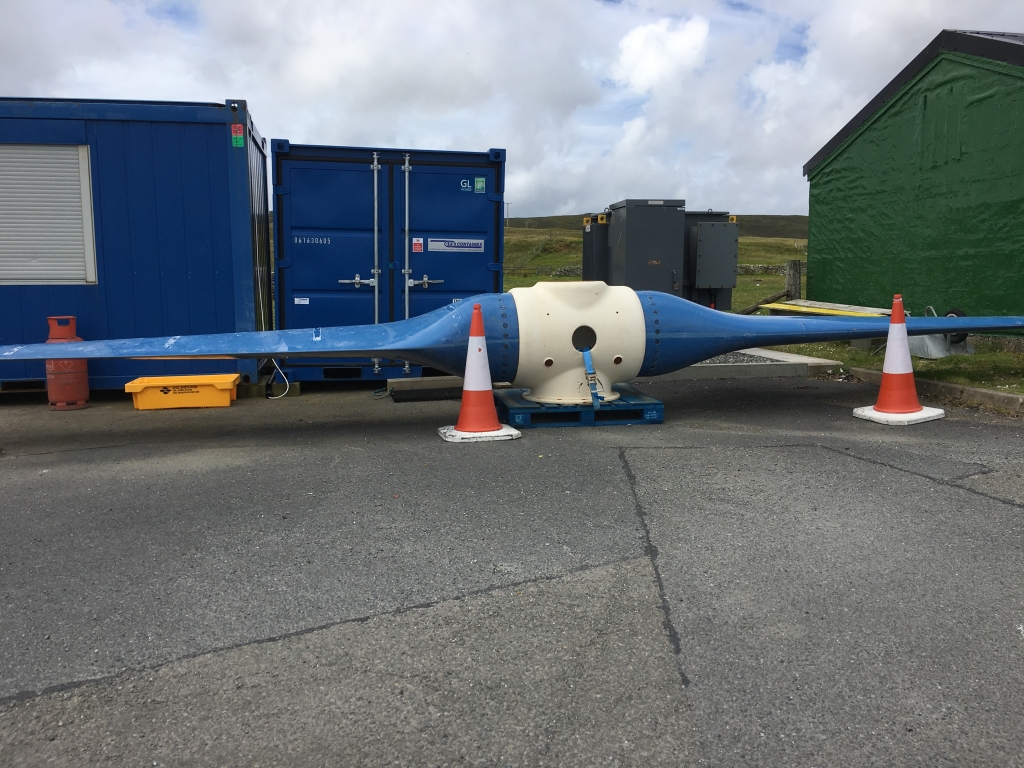 Talking to Greenbarrel on the pier at Cullinvoe recently Nisbet said: “They never kept their word. The turbine was never connected to the grid or properly connected to the ice factory. They were just using the community to trial their machine”. The experience had left a bad taste in the mouth. Asked whether he was bitter about the whole episode Nisbet who has been a mover and shaker in other renewable projects, said, “Not really. Nova has started up again here and they are providing jobs and investment and you can’t object to that.

By saying that Nova was starting again he meant that, seemingly not at all nonplussed by the bitterness and confusion they had caused began on its grander scheme. In the early part of 2016 Nova started the process of installing the first of five 100 kW turbines off the coast of Cullinvoe.

On top of the £3.75m already raised further investment came from the Belgium renewable energy company ELSA SA, with whom Nova formed a new company, Shetland Green Electricity (SGE). Undoubtedly the new funding came via the EU but no-one is admitting this and no-one is saying how much money has been invested. In fact Nova is not saying anything to anyone local about this resumed project. Andrew Nisbet said: “They simply won’t tell us anything at all about what they are doing”. This did not surprise me. Nova in Edinburgh refused to talk to Greenbarrel. And Nova’s local man in Shetland headed for the hills on the several occasions I tried to contact him.

What Simon Forest, Managing Director Nova Inovation did say was: “We are absolutely delighted to be the first company in the world to deploy a fully operational offshore tidal array.” He got that wrong. The SGE did launch two more 100 KW turbines out of the putative five, but one of those had to be hauled out of the water because of technical problems. I saw the blades sitting sadly on the Cullivoe pier on my recent visit.

Two turbines hardly amounts to an array. Anyway the first marine turbine to feed into the UK national grid was built in Strangford Lough some years before Nova got going in Bluemull Sound. Even if SGE gets the five 100 kW turbines fully operational they are estimated to be able to produce 0.5MW of power. Given that Shetland needs 60MW of power to keep the lights on SGE seems unlikely to provide a renewable solution to Shetland energy needs in the foreseeable future.