On June 29th 2016 the company announced it was to supply an integrated HRS to French renewables group Hydrogene de France (HDF). The initial contract is worth Euros1.5 million to ITM, which will supply the hydrogen electrolyser technology, with the station designed to supply fuel cells powered vehicles.

HDF will be responsible for the purchase, installation, operation and maintenance of the station, which will be built in France. HDF will also be in charge of the preparation of another HRS site that will be commissioned in 2017.

The deal appears to be in line with an earlier announcement on June 14 of a Euros35m project for the Hydrogen Mobility Europe 2 (H2ME2) programme funded by the Fuel Cells and Hydrogen Joint Undertaking (FCHJU) under Horizon 2020.

ITM will receive Euros 5.06m from the project for three new HRS. The H2ME2 project will complement the earlier H2ME1 scheme which was announced in September 2015 with plans for 300 fuel cell vehicles and 29 HRS. All told the project spend is now estimated at Euros 100m and there is now talk of over 1000 hydrogen fuel cell vehicles being involved. 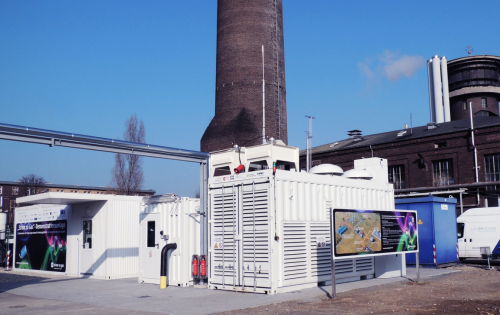 Earlier in the year, in April, ITM said it had signed an agreement with BOC, the UK’s largest supplier of industrial gases which is now part of Germany’s Linde Group. Under this deal ITM will be involved in eight new hydrogen refuelling stations for cars mostly around London, having already opened one in Swindon and another in Rotherham, which is fed by wind turbines.

Hydrogen cars are vehicles powered by Hydrogen fuel cells. The fuel cells work by using a “fuel stack” to mix outside air, entering the car through a grille in the front of the car, with hydrogen they carry in tanks This causes a chemical reaction which creates electricity, with the only emission being, caused by the fusion of oxygen in the air with the hydrogen.

Although hydrogen cars have been around for some time, they have lost out in the race to eliminate diesel and petrol as a leading transport fuel, to electric cars, so far. Electric cars can take an infuriatingly long time to recharge, hours in some cases. But you can recharge batteries at home, overnight if necessary like mobile phones, providing you have a garage or a driveway.

Hydrogen cars, by contrast, take only three minutes to refuel. But you cannot do it at home. They have been handicapped by not offering much mileage, because of problems with compression of hydrogen which can be volatile and because there is no way of getting more hydrogen once on the road because of lack of infrastructure.

Perceptions started to change last October when after a decade of development and millions spent Toyota showcased in an exhibition in Europe called ‘Back to the Future’, what it called the first mass market hydrogen car, the Miral. This car seems to go some way to cracking the compression problem.

The Miral is a 4.9 metres long saloon with a large grille which dominates the front of the car. It has two large tanks of compressed hydrogen which give a capacity to drive 533 kilometres. Thus, the car does not solve the problem of what the Americans call ‘range anxiety’.

The Miral will be fine for driving around London and its environs. But it would be no good for driving to Edinburgh from London, for example. This is why the developments outlined above about infrastructure are such an important milestone for the hydrogen car. The building of infrastructure for the Miral is the real start for commerciality.

ITM is not a large company. In the first half of fiscal 2016 the group was looking at total revenue and grant funding of £3.45m compared to £1.34m the previous year. At the end of March this year ITM had a £11.4m contracted backlog £7.3m contracts in final negotiation and a £18m total pipeline.

Some of this backlog has now been worked through but there should still be funds for the company to be involved in more refuelling stations. Shares in the £39.16m market cap company, which was recently admitted to London’s AIM, are currently at 18.06 pence against a 52 week low of 11p. Broker Roth Capital has set a target price of 25p