Leeds H21: a feasibility project with a large bill to solve a large problem

Leeds H21 City Gate is the project led by the Northern Gas Network (NGN) to change the network in the Greater Leeds area from natural gas to hydrogen by 2029. It is seen as a feasibility project for a future hydrogen economy.

In a talk at an Oxford Energy colloquium on January 24 Dan Sadler described how this project would tackle the “the biggest elephant in the British energy room”. The UK consumes an average of about 1300 GWh of gas per day for heating, swinging between 500 GWh in summer to 3000 GWh in winter. Compared to this the average and fairly constant electricity consumption is a mere pygmy at 600 GWh per day.

Domestic and industrial heat must therefore be tackled if the government is to meet the target of 80 per cent reduction in CO2 emissions by 2050. Coping with the big swings in daily and seasonal consumption requires either the capacity to meet peak demand – which is prohibitively expensive – or a fuel that can be easily stored and transported.

That excludes electricity as there are currently no methods to store electricity that are affordable on the scale required. Heat pumps offer a partial solution as they reduce the amount of electricity required, but air source pumps are not that efficient while ground source are not practical for most existing buildings.

Biomass, for example wood stoves, also offers a partial solution, but on a large scale the amount of biomass required and the costs of transportation make it unattractive.

Gas, on the other hand, is ideal in that it can be stored in large volumes to cope with peak demand, and can be transported through pipes with no loss of energy and minimum running cost. And we already have an extensive network. The only problem is the CO2 in natural gas.

The project
The H21 scheme is a complete proposal covering production, transportation and consumption (see picture). Natural gas, which is mainly methane, is sent to a steam methane reformer that produces hydrogen and CO2. The CO2 is captured and stored in offshore reservoirs while the hydrogen is sent to Leeds through new high-pressure pipes shown in green. Two salt caverns are used for storage, one to handle the intraday variations in demand, the other to handle intra-seasonal changes. 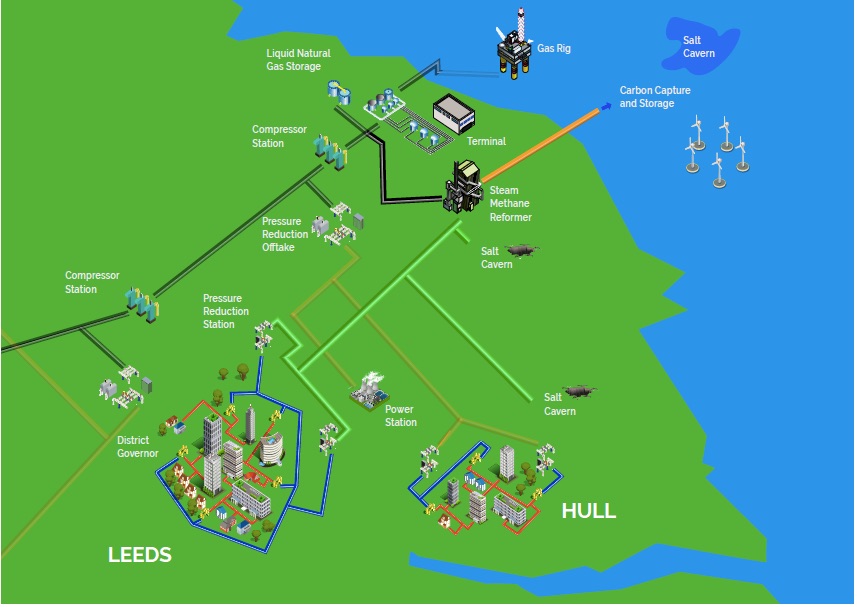 Once in the Leeds area the hydrogen would be distributed through existing medium and low-pressure pipes to the 660,000 consumers. Using a computer simulation of the network NNR have shown that it is possible to isolate different zones such that the complete network can be changed to hydrogen over three summers with interruptions of no longer than a week for any individual consumer. At the same time the gas burners in hobs and heaters would be changed.

Once approved the plan calls for 4-5 years of planning and preparation followed by 5 years of construction of the major new assets, then the three years of connection in Leeds. Of course, once installed the new network can also supply cars.

Are the existing pipes suitable? Steel pipes are not but newer polyethylene pipes are. As it happens the UK is currently in the middle of a 30-year process to convert all steel pipes in the gas network to polyethylene. This is due to be completed in 2034, but would need to be done earlier in Leeds.

Can we be confident of success? Yes we can, because we have been through this before. Between 1966 and 1977 the whole network was changed from town gas to natural gas in a similar way – and without the computer simulation.

Production
The hydrogen will be produced by reforming natural gas because it is the most economical today. It seems unlikely that the amount of electricity needed for electrolysis of water, or of biomass for gasification, would be sufficient to produce the quantities needed at competitive costs. Of course, once the network is in place such plants could be added.

Steam reforming methane, like any production process, comes at a cost in efficiency, which in this case is 70 per cent. Thus an extra 43 per cent of gas is needed and must be accounted as an additional operating cost of the project, as must also the cost of carbon capture and storage. Burning hydrogen may also be slightly less efficient than burning gas, but this is not included.

Finance
The initial cost is estimated at £2 billion, half of which can be capitalised and amortised over 45 years, as is standard for gas networks. The other half is spread over the three years of construction, after which the additional operating cost, excluding finance charges, becomes £139m per year.

If only NGN customers pay for this through the current regulatory method they will see their bills increase by a maximum of 23 per cent during the years of construction, after which the increase will drop to 7 per cent. If the pain is spread over all UK gas customers the increases would be 2.9 and 0.6 per cent respectively. No surprises as to which the report prefers.

Conclusion
The project is expensive, whatever financing method is chosen and even without the inevitable cost increases, but what alternative is there for reaching the emissions goal for heat? H21 is a chance to test the hydrogen economy. We need to know whether it works.