Geothermal energy is heat from the earth’s core that had arrived near the surface where it can be exploited. Proponents point to the very large amount of heat available, whereas pessimists point to the cost of exploiting all but the easiest sources, and sometimes query whether it is truly sustainable. Nevertheless, based on data from BP and IRENA, geothermal sources produced 95TWh of electricity world-wide in 2020, which is about 0.3% of the total. It is in addition used directly for heating; the city of Boise in Idaho has used geothermal heat in district heating systems since the 1890s.

Most current geothermal energy comes from hot water near the earth’s surface. The rocks are be highly permeable, and the water pressure and temperature must be high (temperatures up to 375oC have been found). If the water is not flowing naturally all that is needed is a few shallow production wells, but the conditions for forming such reservoirs are rare and usually associated with nearby tectonic activity. Most of the known cases world-wide are already being exploited.

The next step is to exploit reservoirs with less pressure or permeability, sometimes called Enhanced Geothermal Systems or hot dry rocks. Water is pumped down an injection well and flows through the hot rock to be extracted in a nearby production well. The rock is either fractured by pressurising the injected fluid or is naturally permeable. Such a system is being implemented by Geothermal Engineering Ltd near Redruth, Cornwall (Greenbarrel, July 2021).

Several oil companies, for example Angus Energy, have shown interest in such projects because it is a natural use of their skills at drilling and subsurface exploration. Other start-ups, such as Fervo, also draw heavily on oil industry experience. To be commercially viable the rocks must be much hotter than normal at a reasonably shallow depth. There is clearly a trade-off: deeper wells will encounter hotter rocks but they will normally be less permeable (and therefore the volume of water that can be cycled through the rock will be lower) and certainly more expensive and more risky. So far there is limited experience, most of it in the USA, and although the amount of energy that could be produced is large, the commerciality is not yet proved. 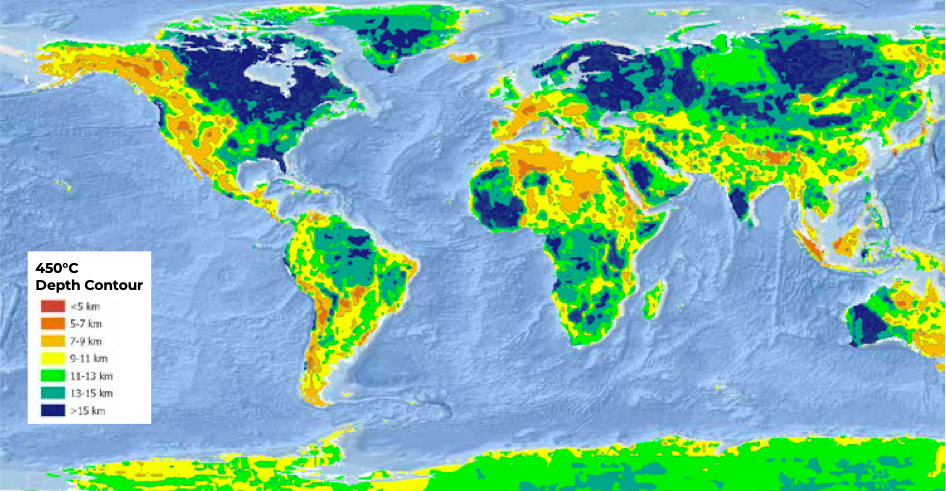 Expected depths below the surface at which the temperature reaches 450C, from the Hotrock Energy Research Organisation (www.hotrockhero.org)

But geothermal proponents have not stopped there. New ideas are based on avoiding the unpredictable rock permeability by heating water in a closed loop. They fall into two categories: Advanced Geothermal Systems (AGS) and Super Hot Rock (SHR) systems.

Advanced Geothermal Systems take advantage of the oil and gas industry’s experience to drill two horizontal wells (in fact wells that are vertical down to the depth desired and then turn horizontal). The two wells meet at their tips. Cold water in sent down one well, is heated by the rock along the horizontal sections and returns to surface up the second well. Since hot water is less dense than cold water the circulation takes place naturally without a pump, thus saving energy.

A demonstration system has been built in Canada by Eavor. The horizontal sections are 2 kilometre long at a depth of 2.4 kms. Proposed improvements include multiple horizontal sections between the two vertical sections, so as to augment the amount of heat absorbed; and locating the top of the vertical wells on the same pad, so as to reduce the surface footprint.

SHR systems aim to drill deep enough that the fluid at the bottom of the well is in a supercritical state. A supercritical fluid is one above a critical temperature and pressure, which for water is 373oC and 220 atmospheres. In this state it is neither a gas not a liquid, but has a density closer to a liquid with a lower viscosity and a higher diffusivity. The conjunction of these properties means that supercritical water can deliver up to ten times more power than steam to the blades of a classic steam turbine.

To reach this condition the well must go deep, below the sedimentary rocks normally encountered when drilling for oil and gas, and into the basement. The latter is very hard and cannot be drilled commercially with oilfield technology. (The deepest well so far drilled, the Kola Superdeep Borehole in Russia, reached 12.3 kms and took over 5 years to drill.) Several companies have proposed alternative techniques for drilling these hard rocks. Among these, Quaise Energy proposes to melt the rock using a gyrotron (similar to a laser but using millimetre waves instead of light waves) and supercritical argon to carry the heat to the surface (Greenbarrel, August 2022), while GA Drilling proposes a downhole plasma gun. In both cases the downhole conditions will be more extreme than the oil industry is used to, so new equipment will be needed.

Not surprisingly, all these companies claim that once they are commercial their levelized cost of energy will be competitive.  However, the AGS and SHR companies are still at the experimental stage, while the EGS systems will always be limited to particular situations where permeability and temperature are favourable. They should not, however, be ignored. There is undoubtedly plenty of geothermal energy and it is continuous, unlike wind and solar. If nuclear falls further out of fashion we could well need geothermal energy to provide a useful fraction of our needs.