Geothermal Engineering Ltd (GEL) has finally produced steam from its United Downs production well near Redruth in Cornwall. It has been a long story. The project was initially announced in October 2009 followed shortly by funding of £1.5m from the then Department of Energy and Climate Change. Planning permission was granted in 2010 but it took until 2017 for sufficient further funds to be raised for the project to go ahead.

The European Regional Development Fund awarded a grant of £6m in 2011 but suspended it in 2013 until GEL had raised sufficient private funds for the project to go ahead. Finally, in 2017 with £5m raised through the green crowdfunding specialists Abundance Investment and investments from Thrive Renewables and Cornwall Council sufficient funding was received to meet the expected £30m cost of the project.

The project is costly because it involves drilling two deep wells into the granite that lies under much of Cornwall and into Devon. This granite contains a significant amount of naturally radioactive elements that are decay and thereby heat the rock. As was observed centuries ago by the Cornish mining industry, the granite surrounding the large geological faults in the area is highly fractured with the fractures full of brine (salty water). At the depth targeted in United Downs the brine is above 190oC but is still liquid because of the high pressure at that depth. 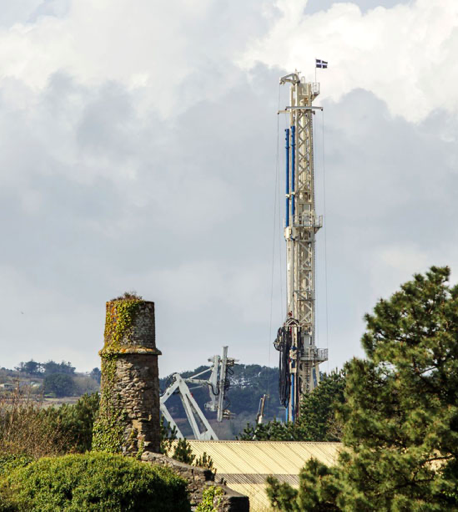 In United Downs the target is the Porthtowan fault at 4500m below the ground. The well is deviated which exposes a larger interval of fractures near the fault. As a result, the length of the production well is 5275m, the deepest on UK land. In oilfield terms that is deep, but not super-deep. On the other hand, oil wells are not often drilled through granite, a particularly hard and abrasive rock. To add to the challenge the well was located in a relatively built-up area, so noise reduction was important. For these reasons a semi-automatic, state-of-the-art rig was used to drill the well. A smaller rig was used later to test the well and install the downhole pump and other equipment.

When this brine is pumped to the surface it becomes steam that will be used to produce electricity from a steam engine. Since the brine is not clean it does not drive the steam engine directly, but passes its heat to a closed circuit of clean water which drives the steam engine. Once cooled the steam becomes water and is pumped back underground in a second well. This injection well goes to 2393m, towards the top of the fracture system. It will help maintain a continual supply of water to the production well.

At the end of June, Ryan Law, CEO of GEL, announced that the first steam had been produced. Next year, once the surface power plant has been installed and connected to the grid the project hopes to produce between 1MW and 3MW of electricity. The exact amount will depend largely on the flow rate of the brine, expected to be between 20 and 60 litres per second (rates that would fill a standard bath tub in 5 to 15 seconds).

Thus, if the estimated cost of £30m proves correct, the cost per MW will lie between 10 and 30, which is several times larger than current offshore wind. However, geothermal energy has several factors in its favour. If all goes well, the power delivered is continuous and will remain so for many years, the only interruption being for maintenance. Unlike wind there is no intermittency. There ought to be less maintenance than for offshore wind, although the wells will probably need to be cleaned, or even side-tracked. There could be some environmental objections if drilling occurs on a large scale, but Cornwall is used to mining so one would think these concerns could be met.

Being the first of its type in the UK, there is clearly much still to learn and important cost reductions to be made. In January the first contract to supply electricity was signed with Ecotricity, but there are also secondary benefits. The most significant is the discovery last year that the brine contained a significant amount of lithium. GEL is looking into a trial lithium extraction project on site. Also, not all the heat from the brine is converted to electricity. The remainder can be used to drive a local district heating project.

These are exciting times for the nascent UK geothermal industry, which has been largely ignored by the government, receiving no mention in the Prime Minister’s 10-year plan nor in the December Energy White Paper. Elsewhere, the Eden Project is drilling its first well (for heating only), Angus Energy is planning a project in Devon (Greenbarrel, July 2021) and GEL intends to drill more wells . Will its future be successful like offshore wind or limited like tidal energy? The next few years will tell.