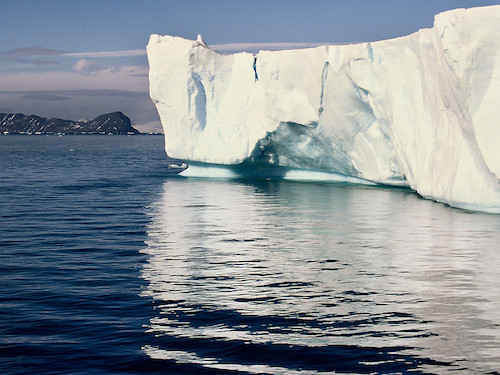 A New-York-City-sized ice shelf has collapsed in East Antarctica, much to the alarm of scientists who thought the region was substantially protected from the impacts of climate change, unlike the more vulnerable western reaches of the continent.

Captured on satellite images, the collapse of the 1,200-square-kilometre Glenzer Conger ice shelf happened at the start of “a freakish warm spell” last week, when temperatures in some parts of East Antarctica soared more than 40°C warmer than normal, reports the Associated Press.

The mercury rose to a balmy -11.8°C, the Guardian reports, attributing the spike to an atmospheric river trapping heat over the entire continent.

University of Minnesota ice scientist Peter Neff told AP he was very concerned by the location of the collapse, stressing that no such event had ever been recorded in East Antarctica before. Neff said he feared scientists have been overestimating the stability of the eastern region, which holds five times the ice of the western side that is already well along in its global heating-induced melt.

The collapse of the ice shelf holding in the Conger and Glenzer glaciers from warmer water has likely been long in the making, said Catherine Walker, an ice scientist at the Woods Hole Oceanographic Institute. “We probably are seeing the result of a lot of long-time increased ocean warming there. It’s just been melting and melting.”

Meanwhile, the U.S. National Oceanic and Atmospheric Administration has projected a minimum 12 inches/30.5 centimetres in sea level rise by 2050, and at least 61 centimetres by 2100. Reporting on this shocking data in a recent op-ed for Bloomberg Green—and urging readers not to despair—American sci-fi author Kim Stanley Robinson turned to a scenario presented in his 2020 novel, The Ministry for the Future.

What is laid out as fiction in his novel—pumping melt water out from under Antarctica’s glaciers to prevent them from sliding into the sea—is not beyond the realm of potential reality, said Stanley Robinson, since the world actually possesses the know-how and the hardware to at least attempt such an act of planetary-level rescue.

“Pumping meltwater out of one type of geologic formation isn’t so different from pumping crude and methane out of another,” he wrote.

“A few years back, I thought this plan for slowing down glaciers was the idea of a single scientist, slipped to me on the side at a conference—suitable stuff for a science fiction writer. Since then, I’ve learned that the idea has been discussed among glaciologists for a decade or more.” The options for getting it done range “from speculative to shovel-ready,” he added, and they’re “all very inexpensive compared with the immense costs of inaction.”

Stanley Robinson proposed that Big Oil make a radical turn away from frying the planet to saving it, a sea change that could be seen as a canny business move. “The oil industry has all the technology and expertise necessary for the task, and because it needs to shift away from fossil fuel as fast as possible, repurposing its skills to this crucial work would be a great way to stay in business.”

While “the logistical demands of this project would be huge,” Stanley Robinson added the world’s navy fleets could also be conscripted into saving Antarctica’s glaciers. “If the point of national defence is saving one’s country from destruction, many countries with doomed coastlines ought to be willing to bring military forces to bear.”

Though the odds of a project needing so much international cooperation “might seem vanishingly unlikely at a moment of warfare in Europe,” Stanley Robinson recalled that even in the depths of the Cold War, Russian and American scientists worked together in Antarctica in the name of scientific knowledge.

“This time it would be for survival.