Dubai World Expo 2020 closes on 31 March. Delayed a year by Covid it has still managed to attract 20 million visitors, only slightly down on the 25m predicted. Spread over 1000 acres there are pavilions or exhibits from 237 countries and 28 organisations. Some attendees surprise. How can small countries like Palau (population 18000) or San Marino afford it? How can war-battered countries like Afghanistan and Yemen find the resources? It is rumoured that many of the exhibits were financed, directly or indirectly, by the UAE. It is even rumoured that the US pavilion was thus funded.

In any case the scale is impressive. It is impossible to take it all in, notwithstanding the ample supply of maps, signs and people to guide the innocent visitor, if only because the queues for the most popular exhibits may stretch to an hour or more. The official theme is “Connecting Minds, Creating the Future” but on the ground this has morphed into three zones called Opportunity, Mobility and Sustainability. Most countries with large pavilions do indeed showcase their contributions to new technology, and there is certainly an impressive range of gadgets on show: condensing water from the desert air, 3D printed food, robots to serve and assist, and so on. 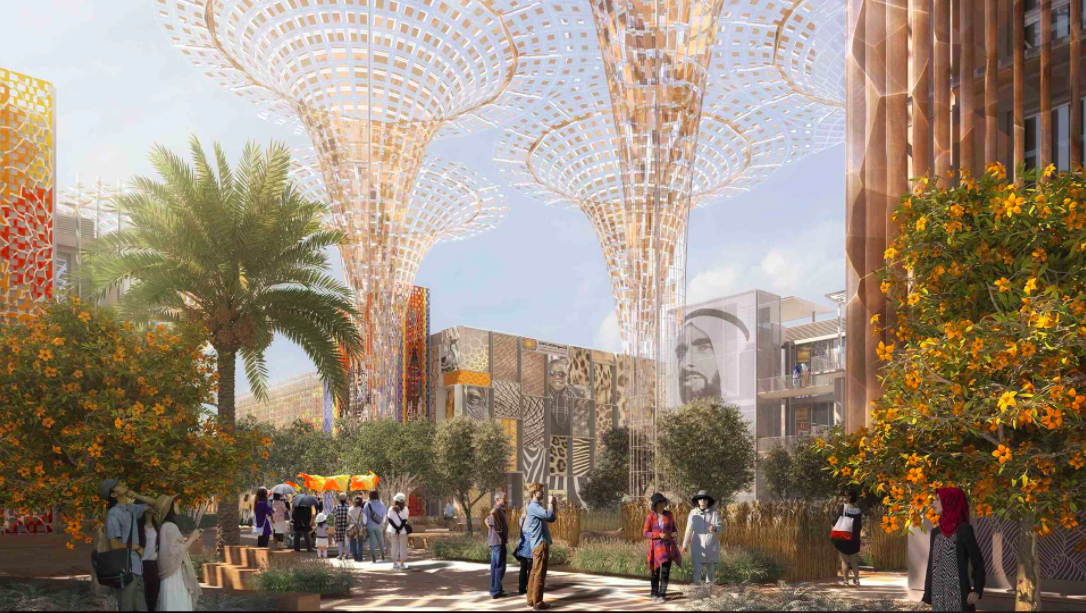 Some specific pavilions are worth mentioning. In Ukraine every wall and bannister is covered with notes posted by visitors expressing support. The Netherlands has a vertical garden, in which solar panels power a condenser that extracts water from the desert air and feeds it to mushrooms and plants inside a chimney. This might be described as the Expo2020 ideal: small scale, on-message sustainability. Saudi Arabia has one of the largest and most entertaining, but there is no message at all. One walks through huge spaces with videos of mainly natural features and towns in the country, such that one feels as if one was there.

The UK pavilion is disappointing. One walks up a ramp lined with display cabinets of historical inventions. There is no clear theme. They become progressively more ordinary, ending up with tins of Campbell’s soup and a set of old mobile phones. At the top one is asked to enter a word on a tablet. Artificial Intelligence software produces a line of verse containing the word and displays it on the domed roof. On the way down the display cabinets contain advertisements by universities trying to attract students.

World Expos have grown from the Great Exhibition in the crystal palace in 1851. They are now regulated by the Bureau International des Expositions in Paris. They continue to be about “finding solutions to pressing challenges of our time”. The stress in Expo2020 was certainly on smaller innovations at the individual level that could improve lives while being sustainable. However, in spite of large arrays of solar panels and extensive use of reusable materials the net carbon emissions and the waste from the exhibition must be very large. It must be hoped that attendees go home ready to spread message and convinced that the cost is worthwhile. People certainly seemed to be enjoying themselves. There are areas for children and a sophisticated entertainment area where well-known groups have played. Maybe it is really about entertaining people and, of course, projecting a positive image for Dubai, accused by many of human rights violations.

Most cities and countries that have hosted Expos already had a well-established industrial past – Milan and Shanghai were the last two and Osaka is the next.  In this Dubai and the UAE have been exceptions as they try to find their place in the world. The UAE has surprised many by abstaining on the UN resolution to condemn Russia for its invasion of Ukraine. This was not a one-off statement. Many British companies had stopped dealing with Russian companies after the invasion, but those with a branch in Dubai were soon reminded that the UAE was neutral in this war, and it expected businesses operating in the UAE to conform to this position at the risk of losing their license.

With its substantial US military base and its historic connections to the UK, the UAE was expected to vote with the West. Several explanations have been proposed: too many Russian oligarchs, displeasure with the US for the stringent terms set on the purchase of F-35 fighter jets, too much enthusiasm in the West for making a deal with Iran and too little enthusiasm for actions against the Houthi rebels in Yemen. It seems most likely that the vote is a genuine expression of the UAE’s position: neither East nor West, but open to profit from one and all.