What should be done if Russia cuts its gas supply?

Europe, including the UK, Norway and other non-EU countries, imports about 33 per cent of its gas from Russia. Not surprisingly, many studies have been made in the last month examining what would happen if Russia stopped its supply. In the short term Europe has the capacity to store up to 20 per cent of its annual needs but now, near the end of winter, this is down to 6 per cent. With summer coming this should be enough to cover needs for a few months. However, in summer the storage should be filled, so if this is not done the crunch will come in the autumn or early winter of 2022/23 (see chart[1]). 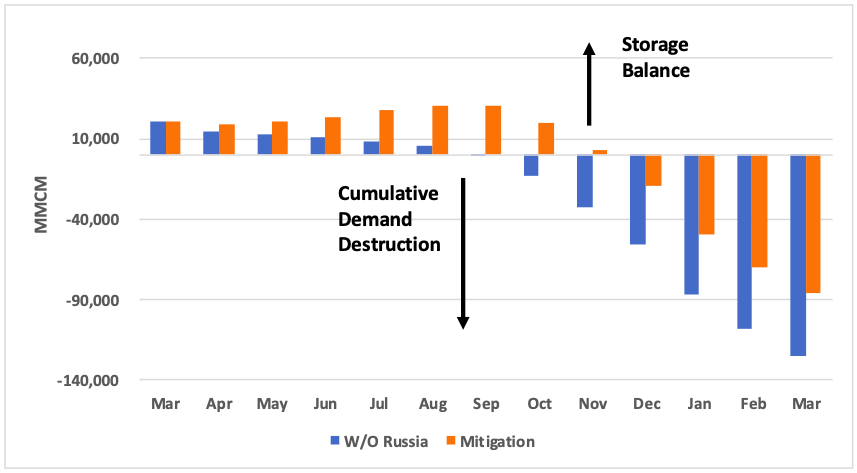 Blue bars: gas storage volume if imports from Russia stopped on 1 April, showing it decreasing through the summer with shortages from October. Orange bars: the same but with the mitigations described in the text. The data is for Europe without the South East (Bulgaria, Serbia, North Macedonia and Greece). From ref 1, with data from IEA, ENSOG and OIES

The International Energy Agency (IEA) has proposed some potential short-term solutions[2]. The first, and most obvious, is to increase supplies from within Europe. Exporters within Europe such as Norway and the Netherlands could increase production by temporarily removing production quotas, doing only essential maintenance and reducing methane leaks. The IEA estimates that this would only provide an extra 3 per cent of needs.

Europe imports 20 per cent as liquified natural gas (LNG), mostly from Qatar, USA, Nigeria and Algeria. The main physical restriction is not only the production of gas but the availability of special boats and of the facilities to liquify it before shipping and to re-gasify it on reception. There are 33 LNG terminals in Europe which have historically been significantly underused, but which recently have been operating nearer capacity. At full capacity they could in theory provide an extra 16 per cent of needs. However, in practice LNG is much in demand, mainly from Asia, so prices will increase strongly and there may be a limitation in supply. The Economist, on 5 March, mentions promises of emergency supplies from Japan, Qatar and South Korea. However the IEA estimates extra LNG supply will only provide a further 5 per cent of needs.

The next issue is the power sector. New wind and solar capacity introduced over the last year should generate an additional 35 TWh of electricity. A further 70 TWh could be generated by a new nuclear reactor in Finland, by delaying the currently planned closure of some nuclear reactors, with the return of others from maintenance, and operating bioenergy plants at full capacity. The total would save a further 5 per cent (all of these estimates relate to the coming winter).

Consumers could of course help. The IEA estimates that reducing heating in all buildings by 1oC would save 2.5 per cent while improving building efficiency and introducing more heat pumps would also save 1 per cent.

There remains a shortfall of 24 per cent of annual consumption. The next step would be to re-open coal-fired power plants and using oil and other liquid fuels in those gas-fired plants where this is possible. This could reduce the shortfall to 17 per cent without increasing overall emissions (because of the initiatives above). For this the IEA sees no near-term solution without increasing emissions or reducing supplies to industry or households. Thermal underwear and wood-burning stoves would become good investments.

The UK is in a very different position to the rest of Europe because of the small amount of gas imported from Russia. The UK produces 40 per cent of its needs, and imports a further 40 per cent via three pipelines from Norway and 17 per cent as LNG mainly from Qatar and the USA. The main problem will be strong competition and high prices, with the lack of storage in the UK exacerbating the problem. However, according to the Oxford Institute for Energy Studies, Norway’s five pipelines to the rest of Europe are operating at near capacity[3]. This means that Norway cannot divert much extra production from the UK to the continent, whatever high price is offered.

Because of the lack of storage, the UK has usually imported some gas from Europe in winter through pipelines to Belgium and the Netherlands. In January the flow was reversed when the gas price in Europe was high. Effectively, gas was being imported from Norway or Qatar and being re-exported to the EU. This may be a foretaste of next winter. Like many other issues this is speculation, but what is clear is that all of Europe needs to take some major steps to avoid the worst next winter.