Lots of people have heard of the Eden Project, but far fewer have actually visited it. This is a record of some of our impressions as we joined the second, more restricted, group.

The Eden project is a huge environmental and educational project, undertaken to show that humans have a good side and could adapt to major environmental change. It was first established, somewhat controversially, in Cornwall, England in 1998, atop the site of a, then almost completely depleted, china clay pit. The most distinctive feature is a number of geodesic domes: the largest of these harbours vegetation typical of the tropical rainforest, a second does the same for the Mediterranean area. 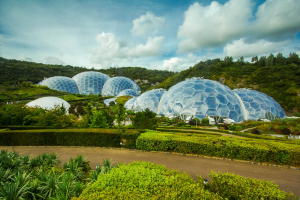 That would perhaps also explain the presence, under another dome, of a small ice-rink, which might  provide an additional focus.In addition, it has to be noted that the project provides employment opportunities in a part of England where these are not abundant (some three hundred people are said to work there) as well as making a sizeable contribution to the local economy of perhaps as much as £2 billion over the years.

But that is not the main justification of the size of the project: one way of appreciating its’ sheer extent is to realise that 83,000 tons of “soil” had to be produced by Eden to enable the huge number of plants, shrubs and trees needed for the whole enterprise to flourish and develop. Another way is to note that the two principal domes are big enough to warrant the use of a small manned helium balloon to service their uppermost portions from within. A further distinctive feature of the project is the prospect of a geothermal link. At the moment the drill bit is said to be four kilometres down into the earth’s core. When this geothermal link is up and running, it should help the economics of the project significantly, as well as assisting with de-risking the idea of geothermal power as a renewable resource more generally.

There are already spin-off projects, both elsewhere in the UK and abroad, for example in Chad and Costa Rica, which concentrate on aspects of the Eden message, but by far the most important replication is happening in Chingdao, in China (between Peking and Shanghai) where work is already advanced in the creation of a veritable second Eden Project.