The news on batteries is dominated by Gigawatt manufacturing sites such as those proposed by Britishvolt in Northumberland and Northvolt in Sweden. AMTE Power, who made a successful entry into AIM in March, is going a different way, focussing on specialist markets with its Ultra range of batteries, each of which has a high specification in one characteristic: power delivery, energy, safety, or temperature. The first two are due for commercial release in Q4 2021, the third in Q3 2022 and the fourth in 2023.

AMTE is not entirely ignoring the push for mass production. In 2022 it proposes to select a site and start the process of building a facility to manufacture 2 GWh of batteries per year. Thus it will have a gigawatt factory, but rather puny compared to Britishvolt (30 GWh) and Northvolt (150 GWh).

In the meantime the focus is on developing the techniques to manufacture its products in high volume at speed, and also showing how they can be integrated into different end products. To this end AMTE have entered into various agreements. The first, with the publicly funded UK Battery Industrialisation Centre, was signed earlier this year with the goal, not surprisingly, of industrialising the Ultra Power and Ultra Energy batteries. 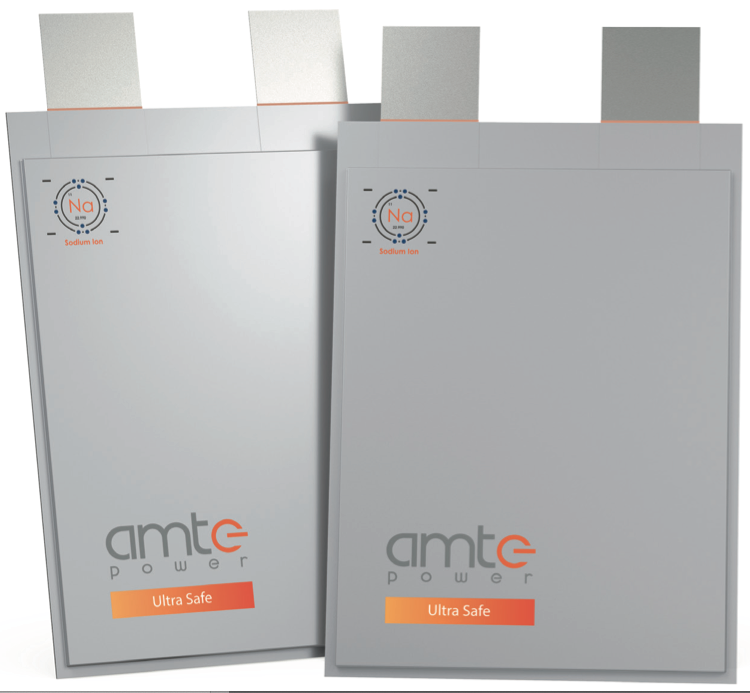 AMTE’s Ultra Safe battery will use Sodium instead of Lithium and will be aimed at the storage market (www.amtepower.com)

The second, a three-year £5m government-funded project called ULTRA, was announced in June with the goal of bringing the same two batteries to automotive readiness. It will do this in conjunction with Magtec, a designer of electric drive systems; Petalite, who is a leader in EV charging; and Avocet a precision metal supplier. AMTE is lead supplier and will receive £2.3m over the three years.

The Ultra Power battery is of interest because it can deliver its power many times faster than conventional Li-ion batteries. The downside is expected to be a shorter lifetime, so the application of Ultra Power may be as a top up, for use in special situations when high acceleration is needed. Also, a battery that can be discharged very quickly can be charged very quickly, hence the involvement of Petalite in the project.

In August, the company announced its participation in another government funded project called CELERITAS to develop ultra-fast charging systems for electric and fuel cell vehicles. Sprint Power, a leading UK low carbon technology company, will lead the £9.7m project. Other participants include BMW, BP, Clas-SiC (a UK/US manufacturer of Silicon Carbide semiconductors) and Eltrium (a UK manufacturer of electrical harnesses and systems).

Quite how all these projects fit together is less clear. They are at least being funded by one organisation, the Advanced Propulsion Centre.

AMTE’s final agreement is a joint venture with InfraNomics, a West Australian finance and consulting company. The joint company, called Bardan Cells, will manufacture, sell and distribute AMTE products to niche markets such as remote storage, extreme temperature and defence work. It will be situated in the so-called Lithium Valley section of the Kwinana Industrial Area south of Perth, which aims to concentrate businesses involved with new energy materials. Australia produced twice as much lithium as any other country in 2020, most of it from near Perth

In a trading update on 16 July AMTE announced that its placement on AIM in March was over-subscribed and had raised £12.9m. Income in the year to 30 June was expected to be £1.1m from UK and EU grants as well as potential customers.  As a result of the placement the company had “.. accelerated investment and preparatory work around the gigafactory, resulting in an increase in operating costs”. In the fifteen months to 30 June 2020 it had reported a loss of £1.88m.

With the commercial appearance of two of its batteries later this year AMTE is poised for breakthrough. Whether the niche markets prove sufficiently profitable remains to be seen. AMTE’s share price stands at £2.15, up from the placement price of £1.75.