When we last wrote about Highview Power (Greenbarrel, June 2020) the company was embarking on its first commercial electrical storage project at Trafford, Greater Manchester. Now it has eight more “..entering the execution phase this year or next” according to an interview with the CEO, Javier Cavada, in rechargenews.com.

Highview is a privately owned company that builds the Cryobattery, a system that stores energy as liquid air (Greenbarrel, July 2020), by using electricity to cool the air until it becomes liquid and then using the energy released when it is gasified to drive a turbine. It is similar to a steam engine but with air.

The historical drawback of the method has been its low efficiency, with too much energy being lost while cooling or gasifying. This was particularly true for laboratory systems and may be one reason that the technique has not emerged sooner. Highview claims to have largely overcome this by using patented techniques that capture the heat released while cooling and the cold released while heating. The Cryobattery is expected to lose only 30 to 40 per cent of the energy input over the whole cycle, similar to a flow battery but more than Lithium-ion batteries. 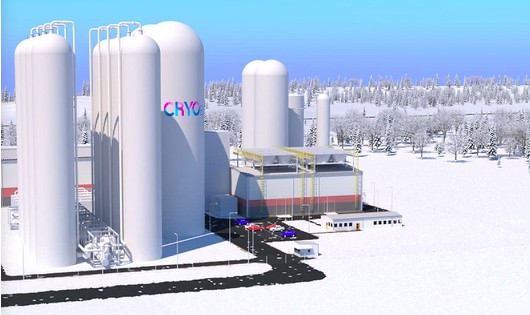 On the positive side are the relatively low manufacturing costs and long life. The costs are low because all the components such as compressors, pumps and cold storage are already mature products that have been developed for other industries. Since individual components can be replaced easily if they fail the system should have a long life, as much as thirty years compared with ten for many Li-ion batteries.

Two new Cryobattery projects are already in development. One is in northern Vermont, where windfarms frequently produce more energy than can neither be consumed locally nor exported easily. The storage is expected to provide 50MW of power for eight hours at full power (i.e. it has the capacity to store 400MWh).

Another recently announced project is the Albannach Power Island to be developed at Spittal in Caithness with a power of 50MW and a storage capacity of 300MWh. It will store electricity from the grid at times of low demand or high renewable output and release it at times of high demand.  It is to be built in an old quarry so environmental objections should be minimal.

An interesting feature of this project is the plan to remove CO2 from the input air before it is frozen. However, no details are yet available on how this will be done or where the CO2 will be stored.

Mr Cavada claims that there are a further 60 projects in the pipeline, the majority in the USA. How many will be built is another matter. One limitation is that in many countries there is no system for remunerating storage attached to the grid. There are also many other new techniques being explored, such as heat storage, physical storage such as compressed air, chemical storage in hydrogen or ammonia.

Different storage types are effective for different ranges of power produced and energy stored. The current Cryobattery fits in between the two current commercial methods, producing more power and holding more energy than most battery systems but less than pumped hydro. Another factor is the response time: how quickly the power can be turned on or off. At two minutes it is slower than a battery but much faster than the 30 minutes of a gas turbine. Overall the Cryobattery fits conveniently the need for grid storage of a small to medium sized town.

Highview still needs to prove its product in a commercial environment. It is interesting that in a study of potential storage mechanisms by the Renewable Energy Association in 2016, the idea of using liquified air is not even discussed[1]. It is probable that the low efficiency at the time put it out of the running. The Cryobattery is an encouraging example of how new techniques can break through.