On 18 June the DBEIS[1] announced an award of £10 million for what is claimed to be the world’s first commercial liquid air battery project to be installed in Trafford, Greater Manchester. The complete project will consist of a CryoBattery, developed by Highview Power, and a combined cycle gas turbine (CCGT) from Carlton Power.

The project is interesting because of the technique being used for storage and because of the scale. The CryoBattery will initially produce up to 50 MW of power with a capacity of 250 MWh, thus allowing 5 hours of operation at full power. For reference the Tesla Hornsdale project in South Australia has a capacity of 185 MWh after a recent upgrade.

It seems that Carlton Power has been trying for a number of years to build a CCGT on the site and has now received permission in conjunction with the battery. The idea is that the battery will help integrate renewable energy into the national grid as well as stabilizing the regional grid. It will be charged when the spot price of electricity is low, for example during periods of excess renewable energy, and discharged when there is too little and the spot price is high.

The CryoBattery uses electric pumps to compress and liquefy air, which is then stored in suitably insulated tanks. When needed, the liquid air is vaporized so that it expands hugely and can drive a turbine to produce electricity. This is exactly the same principle as that of a steam engine, but with air and not steam and at a lower temperature.The process is made more efficient by capturing waste heat and cold released during the different stages of compression and expansion. 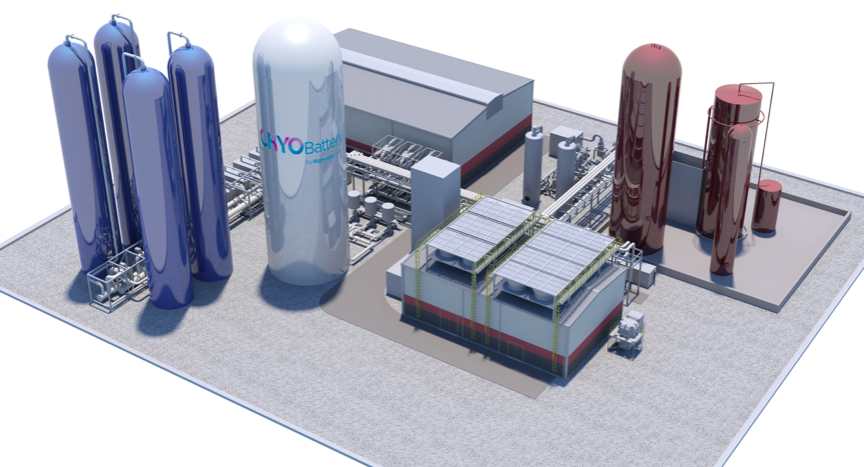 There are several advantages to this technique. It uses processes and equipment that are proven in other industries, such as the production of liquid oxygen or liquefied natural gas. This means parts are available at a reasonable cost, and a long lifetime can be guaranteed (Highview quotes 30+ years, versus 10 years maximum for Li-ion batteries, and 10 – 20 years for flow batteries). It is more sustainable than other batteries in that no rare elements are used, except possibly in the steel.

There are also some disadvantages. It loses about 30 to 40 per cent of the energy input in the process of charging and discharging, which is similar to a flow battery but less than a Li-ion battery, which loses 15 to 25 per cent. Being a thermal and mechanical system it is slower to turn on and reach full power than a Li-ion battery, but similar to a pumped storage system.

Highview has a 5MW/15MWh demonstration plant in operation since April 2018 near Bury, and a smaller pilot plant at the University of Birmingham. It is working on a 50MW/400MWh plant in Vermont as well as further plants in the UK. The CryoBattery is often compared with a Li-ion battery, but in practice it is aimed at storage on a larger scale with longer duration: hours and days, versus minutes and hours for Li-ion. CEO Javier Cavada sees the main competition as flexible CCGT plants.

On the financial side the picture is less clear. Highview has been privately owned since it was formed in 2006. Cavada says that the company has raised £25 million during that time. This has been recently boosted by a £36m investment from Sumitomo Heavy Industries. The levelized cost of storage and the expected profitability of the CryoBattery have not been published, so it is difficult to predict how successful it will be. Cavada says that the cost is less than a CCGT and much less than Li-ion batteries for the size of the plants being installed.

Given that the battery is built from standard equipment one may ask whether Highview has any competitive edge. To counter this, the company claims to have a “significant portfolio of patents”, and appears to be one of the only companies pursuing the technology commercially. The DBEIS has supported it from the start. The UK seems to have a lead in the technology and it offers a local alternative to mainly foreign-built batteries for storage.