The latest step towards an all-renewables grid is beginning construction near Manchester, UK. Excess energy will be used to compress and cool air into a liquid for long term storage. When demand spikes, the air will be reheated and directed through a turbine to generate electricity. The process is called liquid air energy storage (LAES) and could be a solution to the unpredictable nature of renewable energy.

Since the day-night cycle and weather patterns – on which most renewable energy sources depend – do not follow electricity demand, there must be storage to smooth out the supply differences. There are many energy storage solutions, but LAES has a few unique benefits.

The most obvious is that the main component is readily available and free, unlike for batteries or hydrogen. It’s also doesn’t depend on the local geography, unlike pumped hydro storage. Finally, it mostly uses pre-existing components, making it reliable and low-cost for a technology that has only had a few large-scale prototypes.

The work cycle of a LAES plant is relatively simple overall; first air is compressed and cooled until it reaches a critical temperature and pressure. It is then passed through a specialised turbine or valve to liquify it and kept in insulated tanks. When electricity is required, the liquid is exposed to heat again, where it vaporises and expands, forcing its way through a turbine to generate electricity. The input air is often cleaned before processing to remove particulates or other contaminants.

Efficiency can be increased in three simple ways. When reheating the liquid air to generate electricity, the heat that was originally extracted can be used if it was stored. In addition, the system can be coupled to some other industrial process that produces waste heat. Finally, the still-cold air from the generation turbine can assist in cooling the next intake of air.  Some other proposed systems couple the cold air output to air conditioning or industrial refrigerating instead. Whilst highly situational, the offset electricity would effectively create a large increase in efficiency.

Highview Power – the company, alongside Carlton Power, constructing the latest LAES in Manchester – has built two UK test plants in the last decade. The first was in operation between 2011 and 2014 in Slough, UK, with a peak power output of 350 kW and a capacity of 2.5 MWh. It utilised waste heat from a nearby biomass plant, but still only had a round trip efficiency of 8 to 12 per cent. This was believed to be largely due to the small scale of operation.

In 2018, a larger demonstrator plant in the Pilsworth Landfill Facility at Bury, UK, was brought online with a peak power output of 5 MW and a capacity of 15 MWh. The larger scale, alongside the heat from the landfill’s operation, bumped the efficiency to around 60 per cent. It currently provides power to around 200,000 homes during a day. 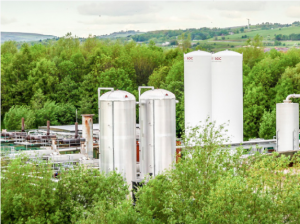 The facility currently under construction in Manchester has a peak power output of 50 MW and a capacity of 250 MWh. It will service the same number of homes as the Pilsworth facility when it comes online in 2022, although for much longer. It is able to provide a large portion of an average household’s demand – 200,000 average homes in the UK use around 84 MW.

Finally, Highview Power are designing a 200 MW/1.2 GWh plant. Calculations from the Birmingham Centre for Energy Storage put the payback period for a 200 MW/3 GWh LAES facility at 5.6 to 25.7 years, depending on the availability and temperature of a waste heat source. Compared to a payback period of more than 40 years for a 300 MW/1.8 GWh pumped hydro energy storage plant, LAES seems to be an economically attractive option.

LAES is a specific form of cryogenic energy storage (CES): cryogens other than air include hydrogen, methane, and helium, for example. Cryogens are compared by their exergy density – a measure of the amount of work a given cryogen can perform per kilogram – and critical point properties. The former should be as large as possible, to increase storage capacity at a given site.  The latter should be as low as possible, to minimise energy loss during the heating up and expansion of the cryogen during energy generation.

Hydrogen, methane and helium all have higher exergy densities than air. In the case of hydrogen and methane, however, a large portion of their exergy densities include their ability to be used as combustible fuels. This is outside of the scope for most CES systems, which tend to recycle their cryogens. In the case of methane, this would also go against the zero-carbon incentive of CES.

Air has reasonable critical point properties, although hydrogen and helium are better still. However, none of the cryogens are as easily available or cheap as air, hence why it is the most popular cryogen in use at the moment.

Liquid air energy storage is a promising technology with many upsides. It has a reasonably high energy density, a short response time of around two minutes and produces low cost electricity. Its two main drawbacks are its round trip efficiency and its storage time. The former will almost certainly increase as the technology matures and scales up. The latter is difficult to improve, but its upper limit of a few days is unlikely to be a major disadvantage. Overall, liquid air energy storage is a technology that should make a big impact on grid energy storage in the years to come.