The bottled water industry is relatively new and has “Come from nowhere”. Who would have thought that we could be made to pay for bottles containing what used to be free from the tap?

Yet some simple statistics would suggest that the sale of bottled water became big business. Apparently, in 2017 7.7 billion single-use plastic water bottles were consumed in the UK, making the UK Bottled Water Industry worth more than £2.4bn a year. The bottles were mostly made from a plastic called polyethylene terephthalate (PET) which commended itself because of its chemical and physical stability. PET packaging provided a suitable barrier against moisture, oxygen and carbon dioxide, along with good transparency and reduced weight. 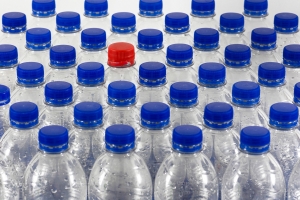 Image by Willfried Wende from Pixabay

Then came the dramatic moment in 2018 when David Attenborough produced a graphic illustration of the noxious side-effects of the use of plastic on “Blue Planet II”. The anti-plastic lobby started to argue that plastic single-use water bottles take 400 years to decompose. Furthermore, collectively half of all the plastic bottles in the Thames were old water bottles. (Not altogether surprising when we are told that in 2017 bottled water sales outstripped Coca-Cola sales for the first time.)

The immediate response was a search for a “Greener” substitute for plastic. But (there is always a “But”) some years later, the conclusion is that it is easier to search than it is to find.

Aluminium cans are not the answer. Certainly they are easily recyclable. But they are made from Bauxite, a mineral which first has to be mined. Then it has to be transformed, using a considerable  amount of electricity. One estimate is that to make a can containing water would incur at least three times the carbon emissions burden of the production of a plastic bottle.

Cartons are equally a snare and a delusion as an alternative. Complexities of layers in the material including a plastic (polyethylene) coating mean that while an increasing number of local authorities will collect cartons for recycling, only 37 per cent of all cartons sold in the UK are recycled due to inconsistent collection and the fact that they can only be properly processed at a dedicated carton recycling plant. So, for the moment at least, if you want to avail yourself of bottled water, the best option is probably to use a plastic bottle made from 100 per cent recycled plastic, in other words a bottle made completely from other bottles.

What is clear is that the leading water bottlers have taken on board consumer unhappiness. In terms of bottle technology, they are now embarked on a two-pronged effort to both reduce the amount of plastic in each bottle and increase the amount of recycled PET they use.

As it happens, the leading brand in the UK is not Nestle, the world-wide market leader. The leading brand in the UK is Evian which in terms of consumer-related improvement has reduced the carbon footprint of its production operations through the use of renewable energy at its carbon-neutral production site in Evian-les-Bains, France., Between 2015 and 2019, there was a 90 per cent reduction in the carbon footprint at the bottling site. In addition, approximately 50 per cent of Evian’s volumes are now shipped directly by train from the plant. In practice, this means a delivery by train to the UK has a carbon footprint seven times lower than delivery by trucks.