Maybe it was euphoria from the easing of covid-19 restrictions or maybe it was the bright summer weather, but between the middle of May and the middle of June the share prices of most companies involved in renewable energy and listed on the London Stock Exchange’s Alternative Investment Market (AIM) rose substantially.

The charts below show the share price history of twelve of these companies, grouped into four categories: Waste, Hydrogen, Storage and Funds.  The AIM100 index is shown with the Funds for reference. To make it easier to compare, the prices are plotted as percentages of the increase since the beginning of the period (thus 300% means the stock has increased by 3 times its value at the beginning). The period is one year for Waste and Funds and five years for the the others. Hydrogen stocks, for example, had significant activity in 2019, so it is useful to consider a longer period. 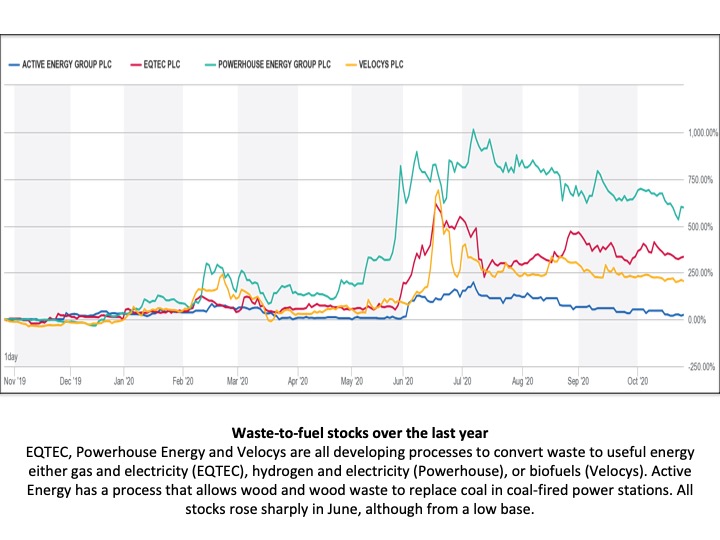 The Waste category shows some of the largest increases, with Powerhouse Energy climbing to 1000 per cent, or ten times its value a year ago. However, all these stocks started from a low base, with Active Energy at 1.8p per share, EQTEC at 0.11p, Powerhouse at 0.4p and Velocys at 1.7p. There has been a general drift downwards since August.

To give an idea of the investments involved, the jump in Powerhouse’s stock at the end of May involved the purchase of about 600 million shares at a cost of roughly £15 million. Powerhouse’s total market capitalisation is now £54m. At the time the company put out a statement that it was “.. not aware of any material basis for this rise over and above the Company’s previous announcements”. 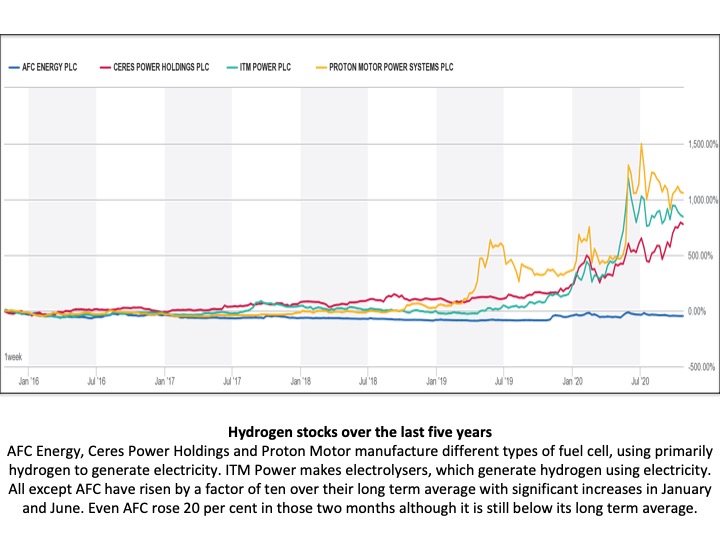 Hydrogen related stocks also increased sharply at the beginning of June, less than Waste but from a much higher base. A year ago AFC was at 4.9p, Proton Power at 22p, ITM at 50p and Ceres at £2.07. These prices are an order of magnitude higher than Waste, possibly because Hydrogen has always had a higher visibility, with vehicle manufacturers interested as well as large industrial concerns. While Hydrogen may be benefitting from a renewed interest in its use for not only vehicles but also storage and heating, the strong increase in Waste may be simply because investors are waking up to its possibilities. 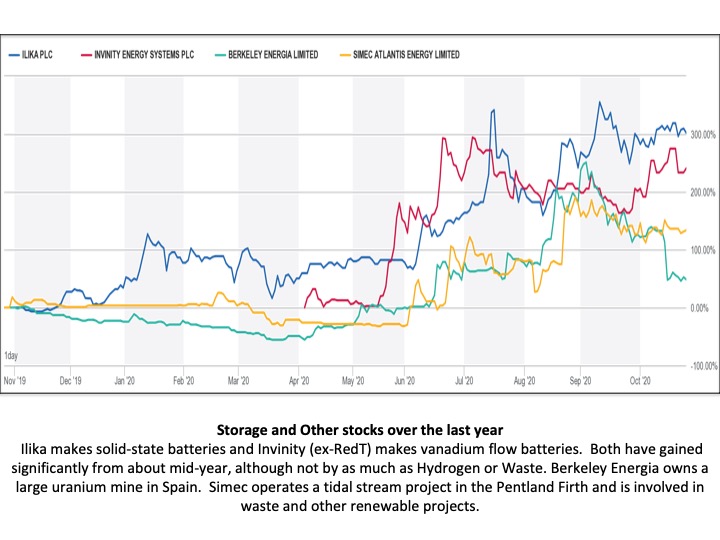 Of the two AIM-listed storage stocks, Ilika has been rising steadily since a five year low in early 2019. It was 22p a year ago and took a significant step up in early June and has kept on going. Invinity only listed in April at 36p, and after a big step mid-May has moved up erratically.

For convenience Berkeley Energia and Simec Atlantis are plotted with the storage stocks. The former did increase a small amount mid-June, but after further increases has now drifted back to near its value a year ago of 15p. Simec has a similar pattern but has ended up higher than its value of 10p a year ago. 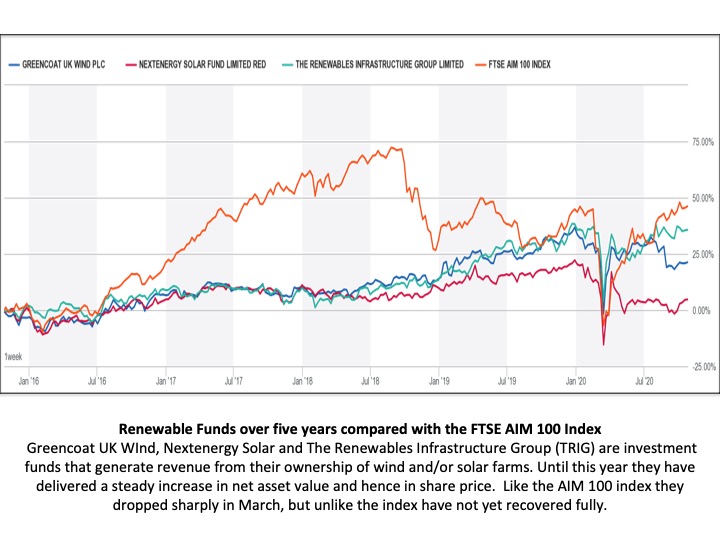 Finally, the Funds all suffered a large decease at the beginning of the lockdown in March, but then recovered to within ten per cent of their values a year ago, the solar fund doing the worst. There is no particular increase in May or June 2020. The FTSE AIM 100 index has increased by nine per cent over the year, in contrast with the main FTSE 100 index which is currently down ten per cent. Funds are different than other renewable stocks in that they do not involve the development of a new technology but have a regular income largely backed by government plans supporting renewables. However some portion of their income depends on wholesale electricity prices, which have dropped significantly during the pandemic.

What might cause this consistent jump in May or June in the value of new renewable stocks related to waste, hydrogen and storage?  Some of the companies published their results for 2019 at this time, but these were neither a surprise nor particularly more positive than in previous years. No particular break-throughs were announced during this period. In June the government announced another £200 million for Innovate UK to invest in new technologies. Useful but not enough, one would think, to spur such a broad jump.

For want of a better explanation it may be that one or more large investors decided to invest broadly into new renewable technology at this time. The sums involved are large but not huge while there is always the hope that one of the stocks will break through.

Finally, it seems, there are signs that this sector is getting the attention it deserves.