In France, things are different, though not necessarily better. The authoritative French newspaper, Le Monde, has reported that on Sunday 30th August Veolia, a large French environmental services company, had made an offer for 29.9 percent of the shares of Suez, another large French environmental conglomerate and an ancient rival. The 29.9 percent represents almost all of the 32 percent share in Suez currently held by a third French conglomerate ENGIE, whose CEO announced in July 2020 that he intended  to dispose of the holding in Suez.

(There is an inwardness to Veolia limiting its bid to 29 percent of Suez, for ownership of 30 percent would necessitate a bid for all the shares, though a further bid at a later time would not be totally excluded.)

It is perhaps worth noting that nothing that has been published suggests that the purpose of the proposed merger would be to change France’s energy policy, reduce emissions or herald an increased concern for the environment.

According to Le Monde, Veolia with 178,780 employees worldwide is the world’s leading environmental services company, dealing with waste disposal, energy and water. It has three percent of the business world-wide, not that Suez with 89,352 employees worldwide is exactly a minnow. For, again, according to Le Monde, Suez is the second largest environmental services company in the sector. It is relevant that both of the companies concerned have historically held multiple contracts with a number of French municipalities. 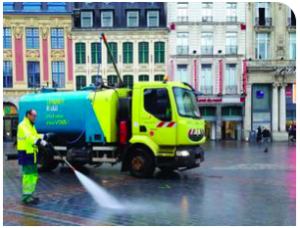 It is worth pointing out that this is in a sense a renewed offer, Veolia already tried and failed to take over Suez in 2012 and Suez have tried in the past to take over Veolia. But this means that it cannot be said that the possible consolidation of the environmental services industry has been caused by the co-vid 19 virus. The most that can be said is that the timing may look better now.

The French Unions have already voiced their concerns about the possible employment consequences for workers in France, the management of Suez have criticised the inadequacy of what they characterise as a hostile bid. The French government with their indirect interest in the affair via their 23.6 percent holding in Engie have smiled upon the offer while expressing doubts about a possible American counter bid. It seems that only another French company can participate in a successful dismemberment of Suez.

Presumably  *competition*  will have a key part to play in the further development of this saga but Veolia, profiting from its earlier experience in 2012 has anticipated a divestment requirement and lined up a further French company, Meridian, to whom they could sell the company, Suez Eaux, which deals with the French municipalities. As this comes with an employment guarantee this ought to help pacify the French Trades Unions. But as a counter move, a sort of “poisoned-pill” response, Suez has come up with a proposal to move their French operations into a legally separate Dutch entity. In recent days both sides have resorted to full-page newspaper advertisements and the Veolia offer has been improved.

There are also reports that Veolia has tried to justify the deal by playing the “national champion” card, though Brussels showed little appetite for this argument in the now notorious Alstrom case. But interestingly the Chinese also seem to have decided that a single national champion is not the way to go. Taking the example of the oil and gas sector China had 3 *national champions* who apparently decided at a preliminary stage which of the three was best placed or which wanted the deal most.

In the famous phrase “This one could run and run”.