Fired bricks are one of the original construction materials, dating back 5000 years to Neolithic China. Their distinctive red colouring comes from a small amount of haematite – a common form of iron ore – in the bricks. Researchers at Washington University in St. Louis, USA have exploited this iron content to grow a conductive polymer that turns the bricks into energy-storing supercapacitors [1], hoping to make the walls of your home into a backup power supply.

Supercapacitors, at their most basic, consist of two electrodes with an electrolyte sandwiched in between. The electrodes become electrostatically charged – i.e. positive and negative charge – when connected to a power supply, and the response of the electrolyte effectively forms a standard capacitor at each electrode, but on a molecular level. This small scale is the key to their higher energy density.

Supercapacitors sacrifice a small amount of peak power output for a gain in total energy stored compared to a standard capacitor, but batteries can store even more. Supercapacitor’s advantages over batteries include higher peak power outputs, much faster charging and little damage from the charge-discharge cycle, giving them a far longer lifetime. 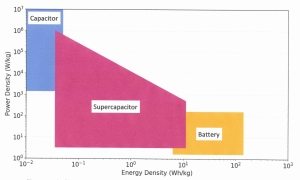 “Ragone plot” comparing the peak power output and total energy storage per kilogram of different energy storage types. Based on a graph in Principles and Applications of Electrochemical Capacitors [2], created using matplotlib [3].

The bricks in the Washington University study acted as the electrodes of a supercapacitor. First, they’re treated with a gaseous acid, then a vapour containing polymer precursors is passed over them. The iron in the brick allows the polymer molecules to grow in the ideal manner to become conductive, until the entire brick is permeated and coated.

Combined with a standard gel electrolyte, the prototype brick supercapacitor had an energy density approaching 1 per cent that of a lithium ion battery and retains 90 per cent of its capacity after 10,000 charge-discharge cycles. When coated with five-minute epoxy, it is even able to function perfectly underwater. At the prototype stage, the cost of a treated brick is around 3-4 times that of a regular brick, but that is sure to decrease if done at a larger scale. The costs of installation, the electrolyte and the epoxy haven’t been considered in that calculation, however. The researchers also believe that the mechanical strength of the brick is relatively unaffected, but that is yet to be tested.

This research is still very much in the laboratory stage, but the final product would be an entire wall of these bricks coated in epoxy for waterproofing, with the electrolyte incorporated into the mortar. This would give a storage capacity of 1.6 Wh m-2 that could be connected to a solar panel on the roof, offsetting some of the intermittency caused by cloudy days.

The researchers believe that the energy density of these supercapacitors could be increased by around fifty per cent within a year. Even then, however, supercapacitors have an inherently low energy density compared to other storage media. They have mostly found use in high power applications, such as regenerative breaking in automobiles or large-scale voltage stabilisers. However, with renewable energy generation creating a less centralised grid, any form of highly localised energy storage – especially one with effectively no net footprint – could find a use in the near future.