BP: The Energy Transition and Renewables

The new Boss of BP, Bernard Looney, has announced a major change of direction for BP. The company will now deliver energy solutions for customers, rather than producing from its own resources, the traditional role of an oil and gas company. He has introduced some radical targets. They have major implications for climate change and for renewables.

Looney envisages that by 2030, low carbon spending will increase from US$500 million a year to $5 billion a year; involvement in renewable generation will rise from 2.5 Gigawatts in 2019 to 50 GW by 2030; the number of electric refuelling stations will increase from the existing 7,500 to 75,000; the number of customers coming to BP’s global retail outlets will double to 20 million. And by 2050 at the latest, BP will be a carbon-neutral company.

These are ambitious targets and they have yet to be fulfilled. But, as a Chinese sage once observed, in a journey it is the first step which is the most important. In those terms Looney has set off just by announcing a major change of direction by one of the world’s biggest oil companies. If the world is to adapt to climate change then some of the biggest companies need to change and now is not a moment too soon. The world is not currently on a sustainable path and needs a rapid transition to lower carbon energy in order to meet the goals of the Paris Agreement. Looney says that he sees BP’s role in this transition as providing reliable, affordable and cleaner energy for people and our planet. 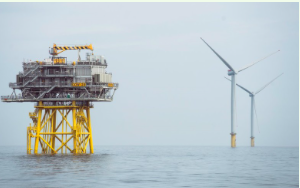 He is pledged to “resilient management” of existing assets with targeted divestments of $25 billion between now and 2025. The divestments so far proposed certainly suggest a changed focus. Arguably Looney has started the process of resilient management by presiding over a revision downwards of the company’s long-term investment appraisal assumptions about future prices of oil and gas. From 2021-2050, they will be an average of around $55/bbl for Brent and $2.90 per mmBtu for Henry Hub gas ($2020 real). These lower long-term price assumptions are considered by BP to be broadly in line with a range of transition paths consistent with the Paris climate goals. However, they do not correspond to any specific Paris-consistent scenario. The total cost of the write-down, which includes some other revisions, is somewhere between $13 billion and $17.5 billion, to be seen against a total value of a total asset base nearing $300 billion.

But what do the more detailed targets mean for renewables? Low carbon spending is projected to rise tenfold by 2031. Welcome news but where is the off-take for that sort of increase? For we know that purchasing is seen as being much less risky than instigating a renewables project. Or take generation:  an increase from 2.5 GW to 50 GW from renewables by 2030 is envisaged. This is a huge ask when existing players are considered. Greencoat UKwind, which started investing in 2013 and is a leading UK wind fund, currently has investments in 35 wind farms, both onshore and offshore. Yet, these farms have a collective generating power of less than 1GW (980MW to be precise).

But Looney is right in deciding that a huge infusion of cash is needed if serious and stretching targets are to be met. For example, Total, the French oil company, is targeting a renewable electricity capacity of 25 GW by 2025, “Thanks to the expertise of our affiliates Total Solar, Total Eren, Total Quadran and Sunpower.” BP will need to build that capacity, or rather rebuild it, for under a previous CEO, Lord Browne, the company had a significant interest in renewables (remember Beyond Petroleum?) but exited the sector when it became clear that a decent profit could not then be made. How times have changed!

Then again, take electric refuelling. BP purchased Chargemaster just over two years ago. Since then, the company has installed a number of electric pumps on BP forecourts in the UK. The total today is 7,500 refuelling installations. The “electric” pundits are hoping to persuade us that the answer to “Range anxiety” is education: for 60 per cent of all refuelling to take place at home and another 30 per cent to take place at the workplace. The BP target of 75,000 installations on forecourts within the next ten years sounds as if it responds to a more traditional approach, albeit that the sheer numbers now envisaged present a real challenge.

The company’s more long-term ambition to be carbon-neutral by 2050 at the latest, mirrors the UK pledge to be carbon-neutral as a country by the same date. This is not a commitment by BP in isolation; for example, Shell also plans to become a net zero-carbon company by 2050 or sooner by selling more green energy to help reduce the carbon intensity of its business. And plenty of other companies are publicly committed to being carbon neutral by 2050, if not earlier. For now it is important that credible targets be set; later what will matter is the overall achievement of those targets, as some emissions are reduced and others off-set.