Darrell Bricker and John Ibbitson think that world population forecasts are wrong. The UN’s current best guess is that the world population will increase from 7.8 billion today to 9.8bn in 2050 and then level out near 11bn by the end of the century. Bricker and Ibbitson think that the population will have already levelled out and be starting to decline by 2050. While a smaller population has pros and cons, what worries them is that it will cause large disruptions that the world is not prepared for: emptying a planet is as big a problem as filling it.

Population forecasts are a major factor in predicting future CO2 emissions, and hence have a strong influence on the introduction of renewable energy. Pressure groups such as populationmatters.orgargue that having one less child is thirty-six times more effective in reducing CO2 emissions than one transatlantic flight. (Such arguments no doubt spurred the Duke and Duchess of Sussex, among others, to announce that they would have only two children.) But the numbers are suspect. In calculating the effect of the extra child the group includes the effect of that child’s children and so on, and assume emissions per person stay constant. Introducing the element of time for children but not for transatlantic flights is incorrect: suffice it to say that population does indeed matter. 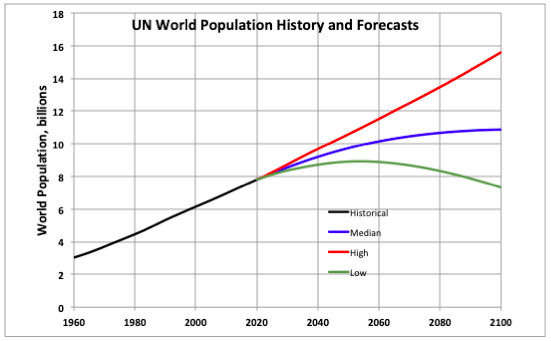 World Population history and predictions from the UN Population Division. The High and Low predictions are roughly equal to adding or subtracting 0.5 child to the birth rate. Median in “best guess”. Bricker and Ibbotson’s forecast is similar to the Low curve. (www.population.un.org/wpp)

The authors present plenty of evidence that improved female education and urbanisation around the world are reducing the birth rate per female and outweighing increased life expectancy. These arguments are no different to those of the UN but they see the reduction happening much sooner and more drastically. To support this they have visited and interviewed people in selected countries around the world.

In Europe the fertility rate has been below the replacement rate of 2.1[1]for years. In Italy, which has one of the lowest rates of 1.33, another study predicted that if that continues and without immigration then in under fifty years the entire population could be accommodated in Rome and Milan. Asia is already at the replacement rate (strongly influenced by China’s so-called one-child policy, now abandoned) with the UN predicting that it will stay under the replacement rate and drop steadily to 1.8 in 2100.

But it is events in Africa that will have the strongest influence, with the UN predicting that Africa’s share of the total world population will increase from eighteen per cent today to twenty-six in 2050 and forty in 2100. Kenya is a typical example. It has halved its birth rate in one generation, from 8 in 1975 to 4 today, but whereas the UN’s best guess is that this rate of reduction will slow the authors see it continuing. Although rapidly urbanising, half of Kenya’s population is still rural, but three quarters have mobile phones. The authors argue, for example, that rural women will learn more quickly about contraception and urban life from their phones and that this effect on the birth rate is only just starting to be seen. 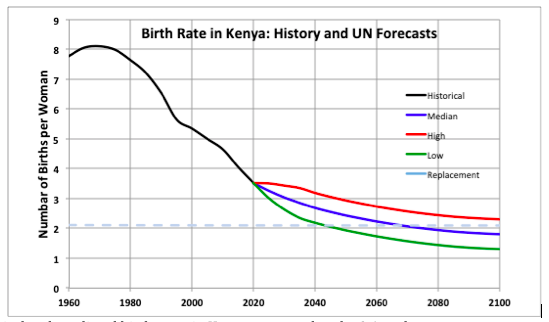 Historical and predicted birth rates in Kenya compared to the 2.1 replacement rate (www.population.un.org/wpp)

Darrell Bricker is a senior manager in IPSOS, a leading information research firm, while John Ibbitson is a Canadian journalist. The subtitle of their book, “The Shock of Global Population Decline”, describes their other theme, which is how to handle a decreasing population and the problems it causes: sluggish growth, declining tax base and growing debt, fewer workers but more retired. The list goes on, but they focus mainly on immigration and foresee that the most successful country of the future will be the one that successfully attracts the most capable immigrants. Perhaps not surprisingly they favour Canada, with its history of high immigration made acceptable to the existing population because it is partly based on private and local sponsorship.

There is a long history of population forecasts being proved wrong, so the authors are brave to stick their necks out. It is fair to say that they do not offer conclusive evidence for their predictions but do offer interesting summaries and anecdotes on the trends in different countries. The difference between the authors and the UN comes down to quite small differences in the rate of change of the birth rate that are hard to predict. Not considered is that the world can adapt and policies may change, sometimes quickly. Europe could introduce incentives for large families, similar to those the French have had for many years, or China could decide it needs a three-child policy.  More than ever population trends will need to be tracked closely.

[1]Fertility rate is the average number of children born per woman, subject to a few constraints. The population replacement rate is 2.1 rather than 2.0 to allow for childhood mortality and the early deaths of some women.