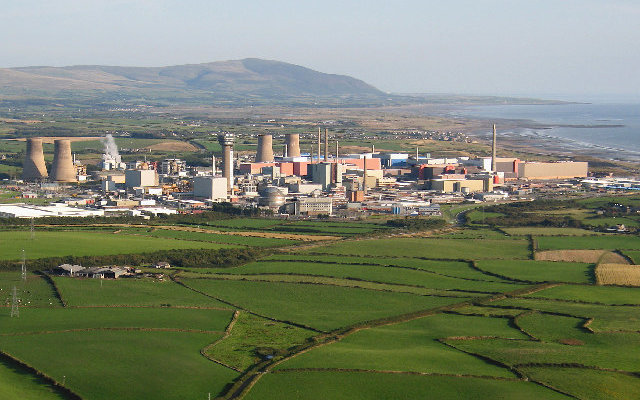 Sellafield: Its plutonium is now classed as “an asset of zero value”. Image: By Simon Ledingham,

Nobody knows what to do with a vast uranium and plutonium stockpile built up in the UK by reprocessing spent fuel. It is now a nuclear nightmare.

Thirty years ago it seemed like a dream: now it is a nuclear nightmare. A project presented to the world in the 1990s by the UK government as a £2.85 billion triumph of British engineering, capable of recycling thousands of tons of spent nuclear fuel into reusable uranium and plutonium is shutting down – with its role still controversial.

Launched amid fears of future uranium shortages and plans to use the plutonium produced from the plant to feed a generation of fast breeder reactors, the Thermal Oxide Reprocessing Plant, known as THORP, was thought to herald a rapid expansion of the industry.

In the event there were no uranium shortages, fast breeder reactors could not be made to work, and nuclear new build of all kinds stalled. Despite this THORP continued as if nothing had happened, recycling thousands of tons of uranium and producing 56 tons of plutonium that no one wants. The plutonium, once the world’s most valuable commodity, is now classed in Britain as “an asset of zero value.”

Over its lifetime the giant plant at Sellafield in Cumbria, north-west England, has taken spent fuel from eight countries as well as the UK and succeeded in producing a small mountain of plutonium and uranium of which only a tiny fraction has ever been re-used as intended. Instead most has been stockpiled and is now stored under armed guard with no use or purpose in sight.

From the start, THORP was lampooned by cartoonists as a balloon in the shape of a great white elephant hovering over the English Lake District. The UK government maintained then − and still insists − that it was a major foreign currency earner, bringing £9 bn (US$11.4 bn today) to the UK over its lifetime.

There is though no publicly available profit and loss account for the plant. (Most of the prices and costs quoted here are those reported by the owners of THORP in their publicity at the time, but the total of foreign currency earnings and some of the 2018 figures below are new ones provided to the Climate News Network).

All that the Nuclear Decommissioning Authority (NDA), which runs THORP on behalf of the government, will say is that the plant has employed 500 people and costs £70 million a year to run. Even after it has closed it will cost £35 million a year to maintain for 10 years while it is cleaned out. Final demolition is set for 2095 with a price tag of £4 billion, a lot more than THORP cost to build.

For its customers back then, Japan, Germany, Switzerland, Italy, Spain, the Netherlands, Sweden and Canada, or rather for their governments, it solved a terrible problem − how to dispose of or store the ever-increasing amounts of spent fuel coming out of their nuclear reactors?

To avoid any anti-nuclear issues at home they were prepared to pay to send the fuel to Britain to be “recycled”. This conveniently postponed for decades the prospect of dealing with the problem of where to deposit the nuclear fuel as waste − well after the time any of the politicians involved would be held to account.

But even as THORP closes and the last load of fuel is dissolved in acid to extract the plutonium and uranium it contains, the problems the plant was designed to solve remain, and new ones have been created.

Every view about the success or failure of the plant is still contested, even its cost. When it opened in 1994 it was said to have cost £2.85 billion, but this week the NDA, its current owner, claims the cost was only £1.4 billion and that all of that was paid for by the foreign governments that wanted to use its services.

In the 1990s British Nuclear Fuels Limited (BNFL), the government-owned company that built THORP, claimed that the plant would work up to reprocessing 1,200 tons of spent fuel a year and make £500 mn profit in its first ten years of operation. In the first decade its target was to have reprocessed 7,000 tons, but it fell short by nearly 2,000 tons as a result of accidents and leaks which caused a series of shutdowns

“The plant should never have been built, has never worked as planned and has left a legacy stockpile of uranium and plutonium that no-one knows what to do with”

These failures, which grew worse over time, led to overseas customers losing faith in the running of the plant and to the cancellation of reprocessing contracts by Germany. Perhaps more importantly, no new contracts were signed.

The fundamental issue, however, was THORP’s failure to achieve its purpose. In order to justify its existence the plutonium and uranium should have been re-used for peaceful purposes. Plans for the new generation of fast breeder reactors that could have used the plutonium were abandoned, so in order to show they were using some of the product from the plant BNFL added another factory. This was to make new reactor fuel, made of mixed oxides of plutonium and uranium (MOX), using material recycled from THORP.

This project was also mired in controversy, but the government insisted on going ahead. It ended in abject failure because the plant failed to work. Instead of producing 120 tons of MOX fuel a year it made just 13.8 tons in nine years and was abandoned in 2011. A government report into the plant concluded in 2013 that this new factory added to THORP had lost taxpayers £2.2 bn.

Despite the reasons for THORP’s existence being comprehensively undermined, the plant continued. This was principally because it still had unfulfilled contracts from foreign customers to reprocess spent fuel, earning money producing plutonium and uranium that no one has a use for – except perhaps a terrorist.

So at the end of its life there is a stockpile of uranium and plutonium at Sellafield that is an embarrassment to its owners. According to the contracts signed in the 1980s the reprocessed material has to be returned to the country of origin – along with the nuclear waste created in the process.

But naturally these countries do not want it back, some, like Germany, Italy and Spain, because they have abandoned nuclear power. To help them out the UK is holding on to it, but at a price.

For large but undisclosed sums of money, the ownership of this unwanted uranium and plutonium is gradually being transferred to the UK. Negotiations are still going on with Japan to transfer to UK ownership more than two tons of its reprocessed plutonium that would otherwise have to be returned with no end use.

This complex situation is further muddled by the fact that the UK already has another much older reprocessing plant, in operation since 1952. This still dissolves fuel from even older and long-closed British Magnox reactors. The first few of these power stations were built in the 1950s to make plutonium for the UK’s nuclear weapons, and then more were erected, mainly to generate electricity for the grid. The Magnox reprocessing plant at Sellafield is also due to close in the next two years.

The result of all this reprocessing is a staggering store of 140 tons of plutonium, enough to power 30 never-to-be-built fast breeder reactors or to provide material to make thousands of nuclear missiles. The UK government has had frequent reviews but as yet has no policy on how to deal with the stockpile, which has to be constantly guarded by armed police to prevent terrorist attacks.

Perhaps even more incredible is the fact there are more than 100,000 tons of uranium in store across the UK, again with no end use in sight. This consists mainly of waste, depleted uranium left over from making fuel, and uranium from spent fuel left over after reprocessing.

An irony of the whole THORP saga, considering the current frosty relationship between the UK and President Vladimir Putin, is that one beneficiary of reprocessing was Russia. The Russians have a plant capable of re-enriching the uranium recovered from THORP and turning it back into fuel for nuclear reactors.

Taking advantage of this facility, which is not not available in the UK, one of THORP’s overseas customers, believed to be Germany, sent 1,000 tons of its recovered uranium from Britain to Russia over a period of five years to be turned back into fuel.

So at least one customer managed to recycle some of THORP’s output. But what will happen to the remaining 9,000 tons of uranium produced by the plant from spent fuel and now stored remains a mystery.

Martin Forwood, from Cumbrians Opposed to a Radioactive Environment, who opposed the building of the plant and has monitored its fortunes ever since, summed up: “The plant should never have been built in the first place, has never worked as planned and has left a legacy stockpile of uranium and plutonium that no-one knows what to do with.”

The Nuclear Decommissioning Authority is currently sponsoring an art exhibition to celebrate THORP’s achievements. Its website says: “Thorp’s contribution to the global nuclear industry is a source of great pride for the communities of West Cumbria.

“It was the second reprocessing plant built at Sellafield and, at the time, was one of the largest and most complex construction projects in Europe, rivalled only by the Channel Tunnel and Disneyland Paris.” − Climate News Network

About the author: Paul Brown, a founding editor of Climate News Network, is a former environment correspondent of The Guardian newspaper, and still writes columns for the paper.