At the beginning of the week, Equatorial Palm Oil (EPO) released its annual financial report for the year to 30 September 2018. Since the interims (see Greenbarrel 24 May) there has been some evident progress on eg the commissioning of the palm oil mill, and on human rights. But these actions have yet to materially improve the financial situation of the AIM-listed company.

According to the report, although revenues rose a little from US $ 167,000 to US$176,000, losses increased significantly to US$4.3m, by comparison with US$3.0 million in the same period in the previous year. As last year, most of these losses were incurred at the palm oil joint venture in Africa, Liberian Palm Developments (LPD), of which EPO has a 50 per cent share.  A Malaysian company, Kuala Lumpur Kepong Behard (KLK) owns the other 50 per cent and, somewhat confusingly, also owns nearly 63 per cent of EPO itself.

On 5 November 2018, agreement was announced on the rolling over for a further five years of a US$2m loan which was made in November 2013 and due to expire this month. This loan, and indeed other similar loans made by KLK in the past, totalling some US$30m, all address a question familiar to many companies, not just those in the renewables sector: how to fund the expenditure necessary before commercial (and ideally profitable) activities can commence. 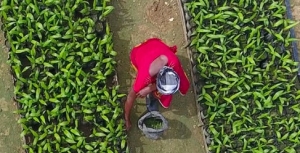 For, as of 1 November, LPD’s total liabilities to EPO amount to US $ 6,192,676, significantly greater than EPO’s total losses for the year ending 30 September 2018. (see above) Obviously, this situation cannot continue indefinitely, but the company now expects that 2019 will see the first commercial sales of oil palm products from Liberia as production from the newly-commissioned palm oil mill finally comes on stream.

There has also been progress on the human rights front.  KLK, the joint venture partner, has for some years faced significant pressure from civil society groups over  its global operations, including those in Liberia, a country where relations with indigenous communities was of particular concern.  KLK has now come up with a new sustainability standard, covering the responsible production and sourcing of palm oil. This is reflected in the report released by EPO in August 2018 showing how it is specifically addressing the human rights issues resulting from its operations in Liberia. These would include:- the better use of chemicals; concerns about workers entitlement ; improved community relations,  as well as the sustainability of operations.

The overall political situation in Liberia is another source of some optimism. In the report, the chairman, Michael Frayne, specifically commented on the importance for foreign investors of the “relatively smooth transfer of power” following the election of a new government and that of George Weah as President of Liberia.

The continued availability of loans from KLK is a further  hopeful sign of confidence in the future. But this should not be exaggerated. The steady decline of the share price over the last eighteen months  translates into a modest market cap for the company of US$5.52m.