Alkane Energy describes itself as a “gas to power” company, with 40 employees managing a capacity of 160MW, the size of a small power station, and producing about 300GWh per year of electricity from gas at 31 sites mainly in the Midlands and Yorkshire.

In spite of the dependence on gas, the company is keen to promote its green credentials. How is this possible? The main reason is that it is the largest producer of Coal Mine Methane (CMM) in the UK.  Coal contains a lot of methane and, as is well known, was a major hazard for coal miners. When a coal mine is abandoned the methane does not disappear, but collects in the underground shafts and passages. Some may leak to the surface and hence into the atmosphere where it is a virulent greenhouse gas.

Alkane taps into this gas either through the existing abandoned shafts or by drilling new boreholes nearby, and uses it to power a reciprocating gas engine to produce electricity. This produces CO2 which is less harmful than methane. In this way it prevents methane getting into the atmosphere and at the same time sells power to the National Grid.

There are many abandoned coal mines in the UK. Alkane’s expertise is to know which ones are the best to exploit. Even so the quantity of gas that is immediately available is limited. More gas will eventually seep out of the remaining coal but this is a very slow process. In the meantime Alkane leaves its generator in place and hooks it up instead to the natural gas network. 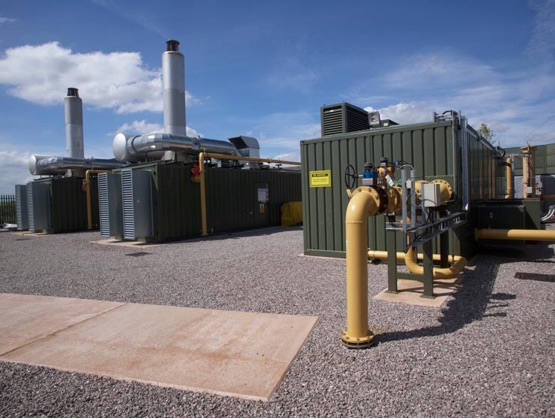 The power produced is most often contracted to the National Grid as a Flexible Peak Generator, on standby and ready to be fired up at short notice to provide power at peak periods, such as 4-7 pm. Flexible Peak Generation is one of several methods employed by National Grid to balance supply and demand. Alkane also trade in the energy markets where spot prices over short periods can be over ten times the regular baseload price.

Reciprocating gas engines, which are like a traditional car engine but powered by gas, have an advantage over the gas turbines used in typical power plants as they are faster to turn on and more efficient at small volumes. Alkane’s generators are therefore ideal for filling in the gaps from intermittent solar and wind generators. Such generators will become increasingly in demand as the amount of renewable generation increases.

As well as expanding its portfolio of CMM sites and flexible generators, Alkane provides equipment to turn biogas into electricity for the grid or for combined heat and power boilers, and also holds the licences for two stranded gas fields in northern England. These fields were considered uneconomic at the time of discovery and are still being evaluated.

Alkane Energy was listed on AIM until 2015 when it was bought by Barbican Bidco Ltd. In its last published accounts for the 15 months to 31 March 2017 it showed a revenue of £31million and a profit of £9m. In March 2018 it was bought by Infinis, a private energy company with a generating capacity of about 300MW from 121 landfill gas sites in the UK.