Redflow, the Brisbane-based manufacturer of Zinc-Bromine flow batteries, is in the process of raising A$14.5 million (£8.7m) on the Australian stock exchange. This follows similar exercises in 2016 and 2015 that raised A$12m and A$16m respectively. Is this money well invested?

The missing link in the use of wind and solar production has been the inability to store energy, or “time shift” it for when the sun doesn’t shine or the wind doesn’t blow.  Redflow provides this link through its main product, which is a 10kWh battery suitable for residences and small businesses known as the ZCell.

The company took its first commercial orders 18 months ago after many years of research and development during which the main income was government grants and tax incentives.

Recent statements show receipts of A$1.2m for the year to end June 2017 with 96 batteries in stock and 120 in transit from the manufacturer. That shows progress but operating costs are expected to be well over A$13m, based on previous years.  Redflow needs to shift up a gear to be profitable. 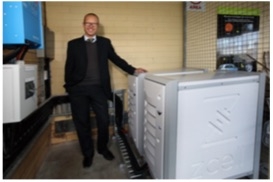 However, somewhat surprisingly, a strategic review in May concluded that opportunities for growth in the residential and small business market were limited.  This is mainly because lithium-ion batteries are cheaper, but also because the economics tend to favour exporting to the grid, at least in Australia. That leaves a smaller residential off-grid market, and the market for large, utility-scale storage..

In fact, Redflow has decided to focus in the short term on telecommunications towers in Asia and Africa. Most of these are powered by the local grid or by diesel generators but often neither are reliable enough to provide the uninterrupted power needed.  As back-up the towers mainly use lead-acid batteries. The market is large and expanding, with an estimated 2.8 million such towers already in place in Asia.

The ZCell offers several advantages over a lead-acid battery: it can operate at higher ambient temperatures, can be discharged completely without damage and has a lifetime that is significantly longer and during which capacity does not diminish. Lead-acid batteries are replaced frequently whereas the ZCell is guaranteed for 10 years or 36500 kilowatt-hours of total energy throughput.

Cost is still important, but Redflow have already identified actions that will reduce cost by 30 per cent. To implement these and to be able to scale up production, manufacturing is being transferred to a new partner in Thailand.

The long-term future of flow batteries must be as storage for renewable energy, since they are too heavy and bulky to be used for transport. Lithium-ion and flow batteries have both positive and negative features – see the article “Flow Batteries: a brief overview” – but lithium-ion batteries benefit from large production volumes and from years of work by many companies improving performance and reducing cost: flow batteries are being developed in small quantity by few suppliers at the start of this cycle.

Thus if Redflow can learn from the telecom experience how to refine its product and reduce costs, it will be in a good position to challenge for the storage market.

And if the Brisbane-based company needed any further motivation, Tesla’s recent offer to install the world’s largest lithium-ion battery in South Australia as storage for the grid and for a new wind farm will certainly provide it.