A government failure to act allows British Gas to raise its energy prices by a whopping inflation busting 12.5 per cent

The suave Mr Iain Conn, the head of Centrica which owns British Gas, one of the so-called “Big Six” oligopoly of providers which has dominated the UK retail energy market, can hardly be said to be lacking in self-confidence. As an unnamed colleague of his at the major oil company BP, where he previously worked as a senior executive, said when asked his opinion of Conn for a newspaper profile: “He has a very high opinion of his own ability”.

He has, however, looked more than a little on the nervous side as he has vaingloriously attempted to defend British Gas’s decision recently to raise gas and electricity prices by 12.5 per cent for the standard variable tariff (SVT) at a time when household budgets are under pressure and he has been awarded a £1 million pay rise taking his total package to £4.2m. Predictably there has been an outcry by some politicians’ and consumer groups.

The SVT is the most expensive of the tariffs levied by the energy companies including the big six— which besides British Gas are: E.ON, EDF, SSE Npower and Scottish Power. Until very recently they held over 90 per cent of the UK’s power market. Like the high street retail banks, they run a ‘follow-my-leader’ pricing policy. Around two thirds of customers nationwide are on the STV. British Gas is the largest of these companies with almost 9m households on its books and so would be affected by any changes to the STV. 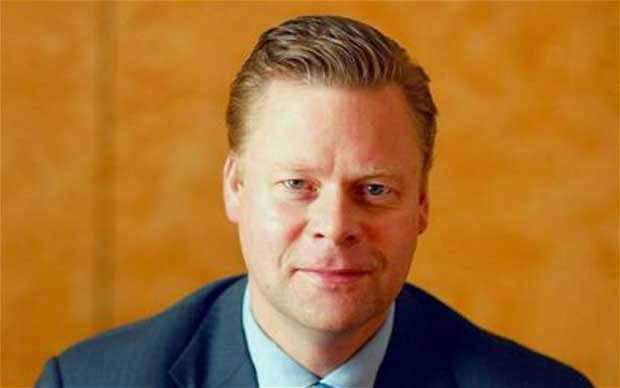 Ian Conn, Chief executive of Centrica which owns British Gas, has a hard time selling its whopping great  price rise of 12.5 per cent to consumers

Earlier this year (February/March) the other five utilities announced prices rise of the order of around 8 to 9 per cent blaming “green tariffs” otherwise known as subsidies for renewable energy paid for by the tax payer and the sharp rise in wholesale energy prices caused the depreciation of the pound following Brexit and the effect this had on imported gas prices. British Gas, perhaps hoping to stay out of the firing line of criticism said it would postpone its planned price increase for the dual gas/electricity tariff until August.

But criticism there assuredly was. Ofgem, the government regulator said the Big Six should have hedged against increases in wholesale energy price rises as they were predictable. Also doubts were cast on whether “Green” levies were as punitive as supposed. At this time there were, not for the first time, demands for a price cap on energy prices.

A lot has changed since February/March, but it could also be said a lot has remained the same. Back in June 2016 the Competition and Mergers Authority (CMA) said that the Big Six were ripping consumers off to the tune of £1.4billion a year. Part of the reason for this was the SVT. The CMA recommended that consumers shop around and switch to a cheaper supplier.

For the first half of 2016 and early 2017 it looked as if the recommendation was working. It is estimated that by June this year more than 3m people had switched to the more than 20 or small groups, some of which have suitable catchy names like Ovo, Bulb and Spark Energy’  that entered the market.

These groups offered deals which came in much lower than what Ofgem described as an annual bill of £1066 for an average UK household. British Gas lost some 400,000 customers to switching in the second half of 2016 and 216,000 in the first half of this year. And this started to impact on British Gas’s bottom line.

Still and all a lot of people on the SVT either could not be bothered to switch or found it difficult to do so because the big energy groups, through a policy of carrot and stick offers and threats made it too difficult to switch. Pressure again grew for a cap on energy prices. The government and Ofgem mumbled about further sanctions on the Big Six but nothing was done.

Then Mrs May, the prime minister, surprisingly called a snap general election. It then seemed a good idea to say she would cap the standard variable tariff (SVT) as it be a vote winner. She claimed a cap on the SVT would save consumers an average £100 a year on its bills.

We now know the general election result was a disaster for Mrs May. In the disarray that has settled on the government the cap on SVT seems very unlikely to happen. British Gas having been given a fright suddenly wasted little time in jacking up its prices. This month it has announced it is going to raise prices by 12.5 per cent not the 8.5 per cent portended back in February/March. This will amount a further £76 a year for those on the SVT, according to Conn.

This time Conn has not blamed the increase on rising wholesale energy prices, which is just as well since wholesale prices have fallen 13 per cent since January this year. Instead he has hung the increase on the need to pay for subsidies for renewable energy producers. The Guardian and even the Daily Telegraph have both said Conn will find this pitch difficult to sell to the consumer.

When David Cameron was prime minister he abandoned nine green policies, including ending subsidies for onshore wind, solar and biomass. A government think-tank found after several cuts in the Feed-in tariffs that payment under the FIT scheme are only marginally above market rates, The FIT scheme ( which a major subsidy to solar projects in particular) accounts for only 7 per cent of energy bills while transmission costs now account for 25 per cent of energy bill because of the shakiness of the National Grid.

British Gas seems to have little justification for such large price rises but we are now back to the status-quo-anti summed up in the refrain “Rip-off days are here again”.