This is the second and final article on community based renewable energy projects in remote locations and the problems they can encounter. This second piece is about wind power

Wind power has been a different story at a local level to other renewable energy projects, such as marine current turbines, in remote places like the Shetland Islands. Andrew Nisbet and the North Yell Development Council (NYDC) of which he is Secretary are based in the small fishing village of Cullivoe on the northernmost tip of Yell in Shetland.

They enthusiastically entered into a collaboration, on behalf of the community, with turbine-maker Nova Innovation from Edinburgh for a tidal array scheme in the Bluemull Sound between the islands of Yell and Unst, the northernmost populated islands in the Shetland chain. If successful it could have solved the energy needs of Cullivoe, its environs and then some, as they say.

Unfortunately the relationship fell apart amid technical problems with the turbines and broken promises, as the NYDC saw it on the part of Nova. Nisbet said at the time: “They (Nova Innovation) never kept their word, they just used the community to trial their product.” 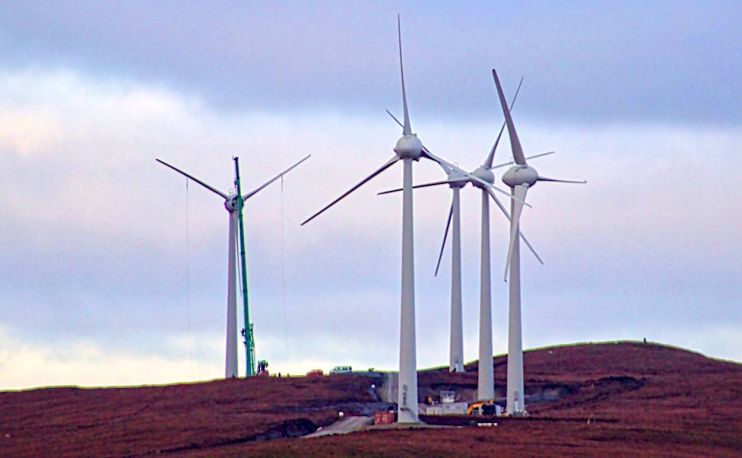 The NYDC has had a much better time with wind power than with tidal. After a decade of planning the NYDC received permission in September 2016 to build the Garth Windfarm (known locally as Da Gart).  Five 900 kW turbines were quickly built in a matter of weeks earlier this year due to unseasonably friendly weather. This was quickly followed by the building of a substation and electrical connections to the local grid as part of the NINES (Northern Isles New Energy Solutions) project.

Da Gart was set up entirely by members of the local community through the NYDC, with the support from the Triodos Bank and the Renewable Energy Investment Fund (REINF) Scotland. The cost has been £8.3m; with some of this in loans.  Nisbet is not worried about this. The community owns Da Gart (it is a fully owned subsidiary of the NYDC) and he said: “Once Da Gart starts earning money, it will immediately start paying off the loans. But that will be over a period of 10 to 12 years”.

The wind farm is capable of producing 4.5MW of power at times; and here’s the rub. This is wind and Da Gart suffers the bugbear of all wind farms—intermittency. Nisbet says that sometimes the wind farm can generate 50 megawatt hours (MWh) of energy which is almost as much as all of Shetland’s needs. But it generates this amount only sometimes. Other times it generates only 2MWh, so it comes nowhere near matching Shetland’s energy consumption which is 60MW to keep the lights on and the power by running ]24/7.

Despite this variation Nisbet is confident the project can generate £1m a year for the community. He also said to Greenbarrel with a wry smile “See those sheds over there on the dock with the letters SGE on them, they are for energy storage so we don’t know what might happen”

The message from all this is that local schemes, ideally with community involvement, can work well for remote communities like Yell. It is better than waiting for an expensive inter- connector from the mainland.

Moreover, it is dubious that an inter-connector will be made. Shetland has been the site of one of the UK’s most bitter disputes over renewable power. Thousands of islanders campaigned against an ambitious scheme backed by the local council to build the 370MW Viking windfarm, involving 103 turbines erected on the main island. This would mean a lot of electricity for Shetland to export

The scheme finally won legal approval in 2015 but construction has yet to begin. With Feed-In Tariffs now almost abolished and other forms of subsidies being reduced, the project is waiting for a UK government announcement on new energy supply deals and the installation of a national grid connection to mainland Scotland.

Back in the day constructing the wind farm was estimated to cost £500,000. An inter-connector was put at a further £500,000. Rumour has it that the cost of an inter-connector would now be around £900,000. The National Grid has not got that kind of money, so it is probably better for Shetland to stick with the local schemes.