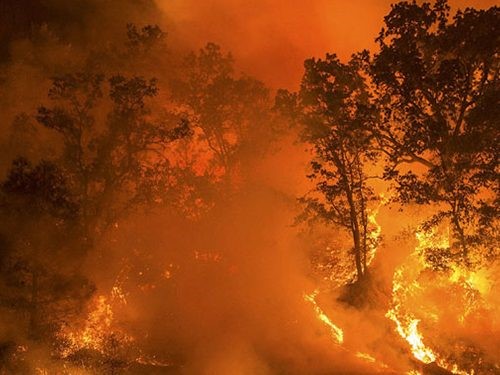 This story includes details on the impacts of climate change that may be difficult for some readers. If you are feeling overwhelmed by this crisis situation here is a list of resources on how to cope with fears and feelings about the scope and pace of the climate crisis. Climate science has left the most severe outcomes of the climate crisis “dangerously unexplored,” says a team of experts who are calling for a new research agenda to prepare for worst-case scenarios.

“Facing a future of accelerating climate change while blind to worst-case scenarios is naive risk management at best and fatally foolish at worst,” write researchers in an analysis published in the Proceedings of the National Academy of Sciences (PNAS).Positing outcomes like “worldwide societal collapse” and even “eventual human extinction,” the international team of researchers writes that there are many good reasons to be concerned about a global climate catastrophe or a “climate endgame.”

Events throughout human history show that climatic changes have caused or contributed to civilizations collapsing or transforming, and have also played a role in each of the five mass extinction events in Phanerozoic Earth history, the current geologic time period that started roughly 538 million years ago.

Research shows that climate change can drive threat multipliers—like international conflict or the spread of disease—and lead to “system-wide synchronous failures” through indirect stresses like water and food scarcity, they add. In the wake of these disasters, human societies will likely be weakened and vulnerable to other threats, such as nuclear war.

The worst outcomes become more likely, and more severe, in global warming scenarios with temperatures that rise 3°C, 4°C, or higher above pre-industrial levels. But while these scenarios are entirely possible, climate research has focused on anticipating less severe pathways, to the near-exclusion of the more extreme outcomes. A prior study used text-mining to show that reports issued by the Intergovernmental Panel on Climate Change (IPCC) underrepresented 3°C-warming pathways compared to the likelihood of them coming to pass.“We know least about the scenarios that matter most,” study lead Dr. Luke Kemp from the University of Cambridge’s Centre for the Study of Existential Risk told The Guardian.

The researchers attribute the underrepresentation of extreme scenarios to several factors. For one thing, complex risk assessments are more difficult to conduct, even if they’re necessary and may be more realistic. Perhaps more influentially, research has focused on projecting the outcomes of meeting the target of the Paris agreement to keep average global warming below 2°C, “with an aspiration of 1.5°C”, without sufficiently exploring the consequences of missing that target. Climate researchers have also tended to “err on the side of least drama” in response to media pressure that criticizes climate scientists as being too alarmist.

But to prepare for what will happen if those targets aren’t met, “as people, as societies we need a good risk assessment of climate change,” study co-author Tim Lenton, a University of Exeter climate scientist, told Inside Climate News. “We don’t need to know just the most likely outcome, we need to look at the low-likelihood, high-impact things.”

To fill that knowledge gap, the study calls for a research agenda that builds understanding of extreme climate change dynamics and their long-term consequences, explores climate-triggered pathways that lead to mass suffering and death, investigates social fragility and vulnerabilities, and synthesizes those research findings into “integrated catastrophe assessments.”“We have modeling on these different things, food systems, migration, conflicts, but it seems like nobody has really put together the toolkit to take a proper look at the possibility of cascading risks, including social fragility,” Lenton said