Clean Power Hydrogen, or CPH2, manufactures a membrane-free electrolyser to produce so-called green hydrogen from electricity and water. The company was founded in Ireland in 2012 by Dr Nigel Williamson and Joe Scott but established its headquarters in Doncaster in 2018. Dr Williamson had worked for ITM Power, the leading UK electrolyser company, but left to develop his ideas on membrane-free electrolysers for which he is the inventor behind several patents.

Conventional electrolysers are of two types, either polymer electrolyte membrane (PEM) or alkaline. In all cases the cell is supplied with water and electricity. The membrane allows the transport of ions between the two electrodes while physically separating the oxygen produced at the anode and the hydrogen at the cathode. In a membrane free electrolyser, water is flowed between the electrodes to give an output that is a mixture of un-ionised water, oxygen and hydrogen. There is nothing to separate the two gases, although there will naturally be more hydrogen near the cathode.

The purity of hydrogen is important for safety and for several of its applications, in particular for some types of fuel cell. CPH2’s solution is to first dry the output mixture, then to cool it until the oxygen is frozen, leaving pure hydrogen as the remaining gas. CPH2 claims that the hydrogen from its commercial systems is 99.999 per cent pure. The oxygen is of medical grade. 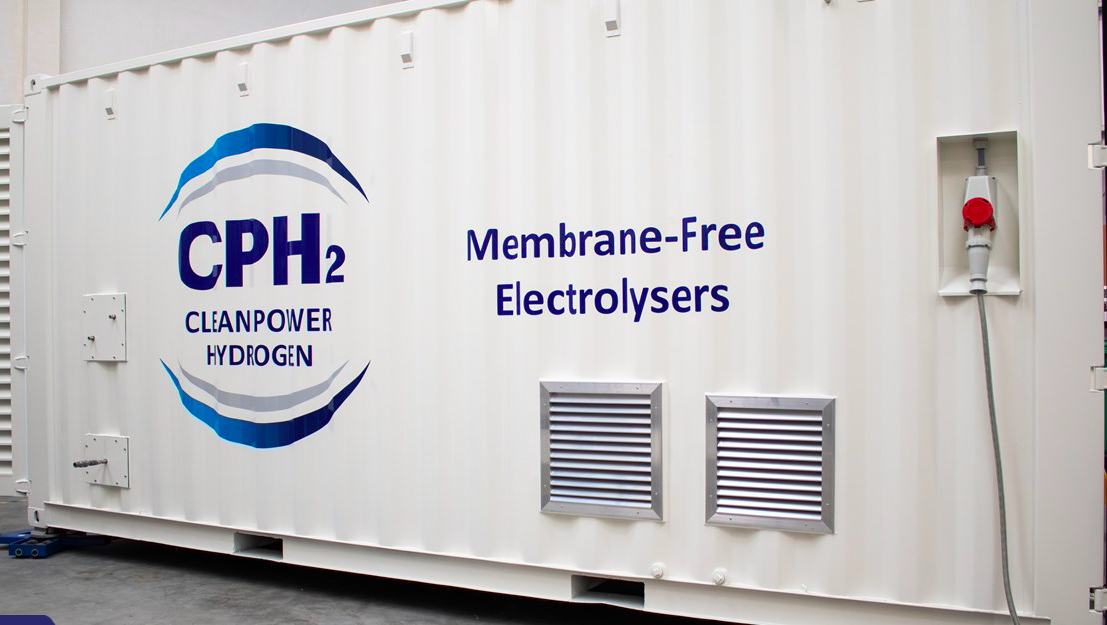 The advantage of not having a membrane is that it is a special material that can be expensive and also a weak point, degrading or becoming clogged by impurities with time. The water supply must be pure, while the materials used in the rest of the cell must not be corrosive, an obligation that can increase the cost. PEM cells use catalysts, often made from rare minerals such as platinum or iridium that are expensive, subject to volatility of supply, and whose mining can have a significant environmental impact.

CPH2’s current commercial product, the MFE220, is mounted in a standard 40-ft shipping container. With a power input of 1 Megawatt it can produce 18.8 kilogram of hydrogen per MWh. This compares well with ITM Power’s nearest equivalent, the HGAS1SP using PEM technology, which produces 15.6 kg per MWh. Thie greater production from MFE220 is surprising given the extra energy needed to freeze the oxygen. In the end it will be cost that determines market share. In CPH2’s favour, its simpler cell design is easier and cheaper to manufacture. It should in principle be more robust, leading to lower operating costs and a lifetime that is claimed to be 25 years, all of which leads to what CPH2 claims will be the lowest levelized cost of hydrogen. On the other hand, many years of development have gone into developing PEM cells and they have been much more extensively used.

The company delivered its first MFE220 to Ireland in 2020, while in 2021 and early 2022 it has received orders for five more from companies based in the UK, Ireland and New Zealand. In most cases the hydrogen will be used in heavy-duty goods vehicles. One ordered by Northern Ireland Water will use the oxygen in its sewage processing plants as well as selling the hydrogen. Larger models have been designed, while the plant in Doncaster is able to produce up to 200 units per year

CPH2 was placed on AIM on 16 February 2022 at a price of 45p per share thereby raising £30million, or twenty-five per cent of its total capital. The share price now stands at 42p.