There are several propositions which all seem to be true individually, yet pose more difficulty when viewed as collectively true. The first is that we are in the middle of an energy transition out of oil and gas, which are widely seen as declining assets: the second is the suggestion that, as a result, investors are increasingly reluctant to put their money into the sector: the third is that the major oil companies are prepared to invest further in oil and gas “to fund alternative energy sources”: the fourth is that, by comparison with 2020, last year, the oil companies as a group really profited from their investments in oil and gas, particularly in the last three months of 2021.

To provide a bit more detail on this last point: on 3 February, Shell announced that it had returned adjusted earnings (profit) of $6.4 billion on oil and gas in the last quarter (Q4) of 2021, prompting immediate cries for a windfall tax. Then on 8 Feb, BP announced that in Q4 2021 it had made a global profit of just over $4 billion from oil and gas; on 10 Feb the French major, Totalenergie, which pumps more gas from the North Sea than any other company, announced that in Q4 2021 it had made a profit of $6.8 billion. (By way of comparison, the American Exxon-Mobil, the largest western oil company, reported a profit of $ 8.9 billion for Q4 21.) 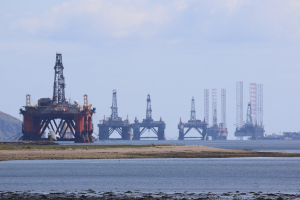 We are all told that this is because the oil price, and the gas price, have both shot up, because of rather different shortages, though nonetheless obeying the same laws of supply and demand. As a result the gas price, now greater by over 300 per cent than the price a year ago, constitutes an immediate political problem (clearly true). It is obvious that new investment today cannot be in time to ease today’s supply shortages, and yet, looking to the future, even suppose the oil companies were to invest today, the time scale for economic return from such projects would seem to be somewhat at variance with the much quoted target of 2050 for carbon neutrality to be achieved.

For it seems particularly bizarre that the major oil companies are the only bodies with enough spare funds able to make a real difference to the energy transition. Yet, while the three European majors all stress their wish to become “energy” companies and to favour renewable investment, their actual investments seem not to be in renewables projects but overwhelmingly in oil and gas projects. One view is that the majors presumably want to transition from being an investor in renewables with no specialist knowledge (roughly their current status) to a technical leader able to make an above average profit.

On this view, the current lack of investment may simply reflect a hesitancy to commit large sums to a renewables sector they do not really understand. Indeed, why would a group of petroleum engineers, geologists and geophysicists do otherwise? Developing expertise takes time. A further problem relates to the sort of investment being undertaken. It is one thing to invest in maintaining or developing an existing oil and/or gas field, a very different proposition to fund entirely new exploration. The former may be justified, even necessary during the energy transition, but not the latter.

A more radical view is that the lack of propensity to invest suggests, not that the oil majors are not investing in renewable opportunities, just that there are not enough viable opportunities. But is that really true? Is this not rather to do with the precise rate of return which constitutes “viable”, which may need to be examined?