It is instructive to realise that “sustainable” now reaches into areas which would have been hard to imagine even five years ago. The other day I came across a circular about Potash, about which I was up to then ignorant (and not just about “sustainable” potash)

Potash, as I am sure you know, is named after a traditional process of producing the stuff, which could alternatively be called potassium. It is used as fertilizer to help feed the planet’s growing population. It appears that the annual world potash market is fairly stable at around some forty-three million tons, over seventy-five per cent produced by five dominant firms which produce an enormous quantity each and get their price down by relying on the traditional technologies of conventional underground mining and conventional solution mining, which has been around for many years, but are not necessarily the most economical method of producing potash. For while these classic techniques give the benefits of economies of scale, this is at the expense of huge salt tailings and brine ponds. 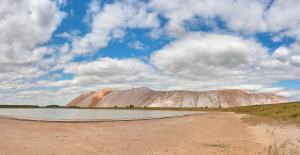 The “New kid on the block” is a Canadian company called “Gensource” based in Saskatchewan, which recently listed on AIM. It is no surprise that it is Canadian (thirty-three per cent of global production comes from Canada, the premier world exporter) and the company seems sufficiently self-aware enough to realise that, in the economic scheme of things, it is simply too small to matter. But the Board are apparently determined that their competitive advantage will be on the environmental side: the banner on the website proclaims “Sustainable potash for a sustainable future”. Their unique selling point is that things will be done differently and “sustainably”, crucially much smaller, so vertically integrated, so much less lumpy, so more flexible. For example, they say that their smaller project size (250,000 tons, or one tenth of the output of a more typical project) will enable the reduction of water consumption by 70 per cent per ton. More generally, an environmentally-friendly approach is claimed to be more advantageous economically because it goes with the grain of future politics.

But the major issue now to be confronted is that this is all theory: it now has to be put into practice. The point is this is a completely different way of producing potash and thus, ultimately, food. While traditional projects are too big to be easily integrated into the market, different approaches open up new possibilities: smaller-scale deposits around the world have always been deemed to be uneconomic, but changed methods, i.e. selective solution mining, will allow the project to be vertically integrated, viable and closer to the market place. As a result, market risk almost disappears. Gensource’s first “environmental” project is the so-called Tugaske project, which is much smaller and thus much easier to finance and much easier to get into production. The output has been pre-sold; the debit side of the funding is already sorted out and in the next few months the credit side will be sorted out.