It was never going to be plain sailing: we all expected Boris to try to wing it with a few platitudes and a couple of Jokes and we were not disappointed. He did, the outcome was somewhat predictable.

Not that it was ever going to be easy. The Indians were the first to take action: they promised to be carbon neutral not by 2050, but by 2070, arguably two decades too late. Interestingly, the FT claims that this “target” should be seen in a more  positive light, for it is but a first step, while Modi’s pledge  for half of India’s power  to come from renewables by 2030 is substantial, as is his promise to reduce the overall carbon intensity of the economy by 45 per cent, again by 2030. It remains to be seen if he can deliver.

Equally, it was also announced that a global agreement had been reached which covered 85 per cent of the world’s forests and sought to put an end to deforestation. More importantly, $12 billion was pledged to be spent on assistance to the developing world in the forestry sector, even though some scepticism was manifest as to how this would be enforced. 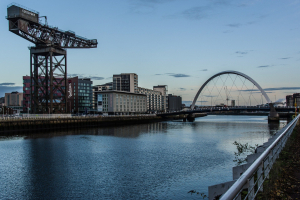 The port of Glasgow, site of COP 26 (Image by Julia Schwab from Pixabay)

The same concerns surfaced in the case of South Africa. The US President announced a country-specific deal, under which the country will receive $8.5 billion from a group of developed countries, in return for which the country will close its coal-fired power stations earlier than planned while “…supporting an equitable transition to renewables.”

Elsewhere, Carney, the former Governor of the Bank of England, who is now the Chairman of the Glasgow Financial Alliance for net-zero (GLANZ), says that the Alliance now has a membership of more than 450, comprising banks, insurers and asset managers from 45 countries and claims that overall it could deliver $100 billion of investment to help reach the target of net-zero by 2050. But crucially, there is no sign of any compulsion.

Contrast the Chancellor of the Exchequer’s promise, perhaps significantly revealed in Glasgow rather than during his budget speech, to introduce legislation by 2022 to compel large British companies to reveal their plans to move towards net-zero.

The financial sector faces renewed pressure to tighten up on their oft-repeated (and oft-ignored!) claim that they will cease funding fossil-fuel projects. Though widely trumpeted as a solid gain to be expected from this COP, there has yet to be an agreement. Rumour has it that the coal producers, Australia to the fore, are fighting a rear-guard action.

Be that as it may, for COP26 to be judged a success, (or at least not to be considered a failure), the second week will have to produce most, if not all of the following: something fairly bankable on a timetable to cease financing fossil fuel installations; an expansion of the methane initiative to include the big emitters – India, Russia and China; agreement on a methodology for reducing  CO2 emissions, and, dare I say it, something on the fashionable subject of the moment – Electric cars.

Quite a tall order for a Prime Minister whose attention seems elsewhere.