The True Potential of Renewables

An analysis of the historic cost trends of energy technologies shows that the decades-long increase in the deployment of renewable energy systems has consistently coincided with steep reductions in their costs. The cost of solar photovoltaics has, for example, declined by three orders of magnitude over the last fifty years. Similar trends are to be found with wind, energy storage, and electrolysers producing hydrogen-based energy. Such reductions will take the unit cost of several renewable technologies well below the unit cost for electricity generated by fossil fuels, making them not just the cheapest renewables, but the cheapest sources of power.

Some university researchers have now noted that most major climate mitigation models produced for the International Panel on Climate Change (IPCC) and the International Energy Agency (IEA) have continually underestimated such trends despite the trends being quite consistent and predictable. So these researchers have put forward the idea that, by incorporating such trends into a simple, transparent energy system model, new climate mitigation scenarios could be produced that would provide a contrasting perspective to those of the standard models. 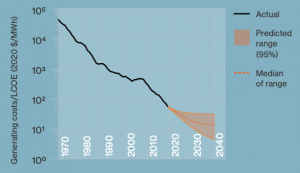 Their report suggests that these new scenarios would provide an opportunity to reassess the prevailing narrative that a Paris-compliant emissions pathway will be expensive, will require reduced energy reliability or economic growth, and will need to rely on technologies that are currently expensive or unproven in terms of scale. If true, this revisionist research would be pretty important, for it would provide encouraging evidence for governments that are looking for greater ambition on decarbonising their economies while at the same time providing economic growth opportunities and affordable energy.

Of course, cost is not the only consideration for renewables. Solar and wind are inevitably intermittent, almost by definition no electricity can be produced during the hours of darkness or when there is a flat calm. So more work is needed on how to store any excess electricity produced during the good times. Then there is the issue of how to best guarantee electricity when there is increasing supply from renewables. When ten per cent of electricity is generated from renewables, the problems of intermittency are probably manageable; thirty or forty per cent of electricity from renewable sources is far more challenging. Stand-by power is the answer at the moment, but in the longer term how can a business case be constructed for a plant more conventionally powered when it is difficult to judge whether the requirement is only for stand-by power, or for possible base-load use as well.

Finally, it may be worth making a further point on solar panels, which could in theory benefit from almost unlimited energy supply through the sun.  Some say that the power of the individual solar cell is today more or less the same as it was when the first solar installation was constructed by the US Navy in the 1950s. At that time, solar power was expensive, but then who counts the cost of inventions when the product is designed for the Space programme? But today, even a modest increase in power could be transformational. Commercial solar panels currently convert about twenty per cent of the incident energy to electricity, but new materials could increase this to 30 per cent or more. So there is plenty of room for improvement.